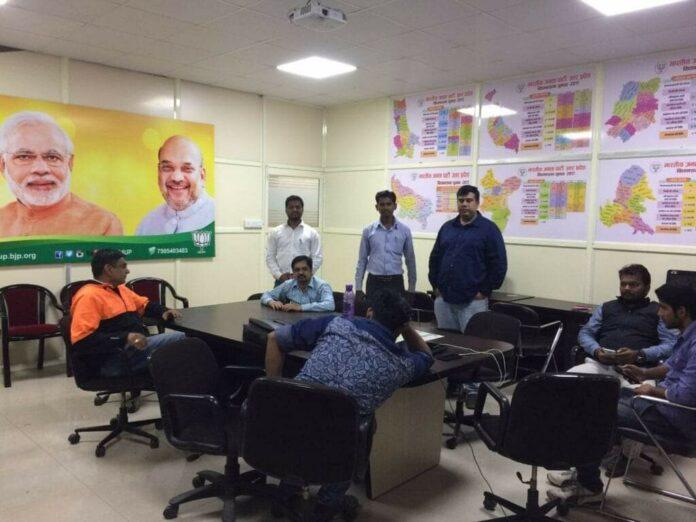 As street protests against the controversial Citizenship Amendment Act (CAA) continue, it must be evident even to the most bullish supporters of the newly minted law, that the Modi government’s outreach to drum up support on the issue is floundering.

There are several reasons for the failing campaign, including the probability that CAA is an unpopular idea in the first place. But rather than face up to uncomfortable reality checks, government circles believe that the problem lies in a poor communication strategy. For the first time since the Modi juggernaut rolled out in 2014, the masters of spin are worried that they just can’t seem to find the right narrative.

How BJP IT Cell Head Became the Butt of Jokes – A prime target of criticism amid mounting anxiety is the BJP’s controversial IT wing chief Amit Malviya. He is being blamed for messing up the social media campaign with a series of bloopers, that have made him — and with him, the government and party — the butt of criticism and jokes. Instead of attracting followers, Amit Malviya has ended up being trolled.

Malviya-baiters are many in the BJP, and they are rubbing their hands in glee over the IT cell chief’s current discomfiture. While Malviya is no stranger to controversy, there is a feeling that he may have gone overboard this time.

The big blooper which has derailed the government’s social media outreach is his use of the wrong hashtag soon after Modi launched the #IndiaSupportsCAA campaign on Twitter. Modi appealed to Twitter users to share the hashtag and show their support for CAA.

Malviya led the way but unfortunately, he used the hashtag #IndiaSupportsCCA instead. Many bhakts followed suit including prominent Gujarat MLA Jagdish Vishwakarma, who also heads the BJP’s Ahmedabad unit. In less than 24 hours, #IndiaSupportsCCA had out-trended the official hashtag. Worse, it also invited a slew of mocking tweets.

Sample these: “CCA = Copy Cat Association”, “OMG the bhakts have turned rebels”, “CCA = Cancellation of Citizenship Act”, and so on.

Amit Malviya: No Stranger to Controversy – This blooper came within a couple of days of another one in which the BJP IT Cell chief had posted a distasteful Twitter poll seeking to tar renowned TV news anchor and senior journalist Rajdeep Sardesai’s professional integrity. While the poll was applauded by bhakts, the media world rose up in protest. The Editors Guild slammed it as “a deplorable act’’ and an “offensive McCarthyist social media poll’’. It urged the BJP to caution him.

Ever since Malviya was appointed to head the BJP’s IT Cell in 2015, he has whipped up storm after storm. Much to the chagrin of his opponents in the party, he has got away with it because his bullishness fits neatly into the mould of the new BJP crafted by the Modi-Shah duo. He began as a protégé of railways minister Piyush Goyal, say BJP sources, but is now well-liked by the top brass for his ‘sassy’ tweets.

But with Modi’s CAA outreach spluttering, rumblings about a poorly-managed social media campaign are getting louder. After all, when an A-lister Bollywood star like Deepika Padukone throws her weight behind the BJP’s biggest bugbear, ie, JNU students, it’s clear that something has gone wrong.

Modi Govt Struggles to Douse Anti-CAA Fire – As the government struggles to douse the anti-CAA fire singeing it, many are questioning the efficacy of its communication strategy. Modi has managed to spin every narrative in his favour so far. From demonetisation — which he successfully pitched as a ‘pro-poor’ measure — to the Balakot strike — which became a winning election plank — to the withdrawal of Article 370 — which he showcased as a mascot of nationalism — the prime minister has rarely failed to convince people of the correctness of his decisions.

But on CAA, he seems to be on a slippery slope; not for want of trying though. The government unleashed all its top ministers to address groups of opinion-makers and thought leaders, including Bollywood celebrities. The ministers have also flooded newspapers with articles and op-eds in different languages. Yet, the protests continue.

ALSO READ:  Do You Know The 'Danger' Of Turning On The Car A/C Upon Starting?

In fact, Modi had to cancel his trip to Assam to inaugurate the ‘Khelo India Youth Games’ because of raging anti-CAA agitations. This is the second time in a month that he has scrapped a visit to the state.

Modi Govt Will Need More Than A ‘Good Spin’ to Escape Anti-CAA Storm – While it struggles to refashion its flailing communication strategy, the government seems to be feeling acutely the absence of its leading spin doctor, Arun Jaitley, who passed away recently. Party circles recall that Jaitley would often bail the government out of critical issues with his media-management skills, his legal expertise to defend any brief given to him, and his accomplished command over language — both English and Hindi.

He would blog regularly, talk with party and government spokespersons to ensure a common narrative, and when necessary, suggest ways to neutralise a growing controversy without loss of face.

However, it may take more than a good spin or a convincing narrative to dig the Modi government and BJP out of the CAA rabbit hole into which they have fallen. What’s needed is a tactical retreat before the current storm builds into a cyclone. #KhabarLive