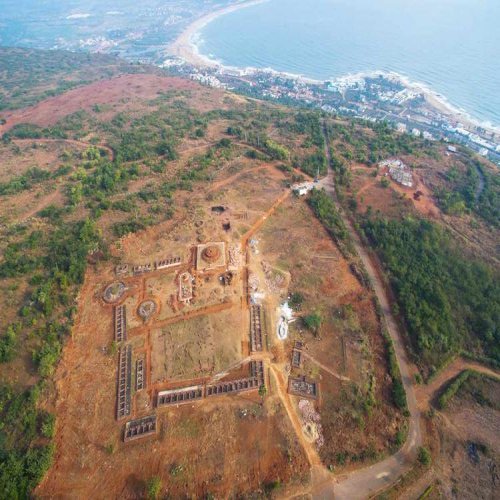 The Andhra Pradesh government has become embroiled in yet another controversy over land acquisition, this time over the decision to build a government guest house near the Thotlakonda Buddhist Complex near Visakhapatnam. Activists and Buddhist organisations have objected to any constructions by private or government entities in the area, expressing concern that there might be potentially rich archeological evidence related to the Buddhist era from the 3rd Century BC yet to be unearthed.

Regardless of legal challenges, the Y.S. Jagan Mohan Reddy government in Andhra Pradesh is keen to relocate the executive capital to Visakhapatnam as part of its agenda to create three capitals. But activists fear that the relocation and the prospect of rapid urbanisation may pose a serious threat to the steel city’s heritage sites.

This anxiety is visible in the spate of protests by heritage activists and Buddhists against the government’s plan to build a state guesthouse on 30 acres of land close to a Heenayana Buddhist complex. The protesters said the construction of guesthouse so close to the Thotlakonda Buddhist Complex risks damaging the 2,000-year-old heritage site.

After facing several hurdles, the YSR Congress government’s plan to distribute the capitals got an impetus when governor Biswabhusan Harichandan cleared the relevant Bills.

Though the government’s plan was to shift the executive capital to Visakhapatnam on Vijayadasami (October 25) in the presence of Prime Minister Narendra Modi, they were thwarted after the high court ordered status quo to be maintained at least until September 21.

The court gave this direction after a group of farmers in Amaravati challenged the government’s three capitals plan. The opposition Telugu Desam Party (TDP) has accused the government of subverting the high court’s orders, saying it is trying to shift the capital to Visakhapatnam through the backdoor. The construction of the guesthouse is part of such “covert” plans, the party claims.

The state government has issued a government order (GO) directing the district administration to acquire 30 acres of land adjacent to heritage sites in the Kapuluppada village on the city suburbs for the construction of a guesthouse and quarters for government personnel.

Subsequently, the government ignored the protests and laid the foundation stone for the guesthouse ahead of its avowed mission to make Visakhapatnam a seat of power with a provision for the Chief Minister’s Office, secretariat and the other paraphernalia that comes with the capital.

Thotlakonda emerged alongside the other Buddhist complexes, such as Bavikonda and Pavurallakonda. The Buddhist relics fell within the influence of the ancient region of Kalinga, which played a pivotal role in disseminating Buddhism within India and also to Sri Lanka and Southeast Asian regions. Buddhist monks from across Asia were believed to have travelled to Thotlakonda to study and practice Buddhism.

Tourism minister Muttamsetti Srinivasa Rao told the media that the proposed government guesthouse, which would occupy a 12-hectare site on the Greyhounds Hill, would not pose any threat to Thotlakonda or the nearby Bavikonda archaeological sites.

The minister brushed aside the apprehensions of heritage activists, who say the planned compound with the guesthouse is just one kilometre away from Thotlakonda. He said the project is not located on any heritage sites and will not pose any threat to them. “Our government is committed to the protection of heritage sites,” he told #KhabarLive.

But the protesters rejected the minister’s contention. V.S. Krishna and K. Sudha of the Human Rights Forum said the GO pertained to land acquisition for the guesthouse is in plain violation of the Andhra Pradesh Ancient Historical Monuments, Archaeological Sites and Remains Act, 1960. The piece of land acquired for the guesthouse falls under the survey No. 314 of Kapuluppada village and it was expressly protected by the Act, they observed.

Quoting studies, Krishna said archaeological remains are contained across several hills in the area and there are over 120 micro and unexplored sites around Thotlakonda. Because of constructions proposed by the government, as yet undiscovered cultural heritage may be in danger of being wiped out, he feared.

The word Thotlakonda in Telugu is derived from the rock-cut water cisterns found in the local bedrock. Since the discovery of the site in 1976, it has been declared a protected monument by the state government. Notable excavations at the site include a maha stupa, a stone pillared congregation hall, three circular prayer halls, 10 viharas, a kitchen complex, and a refectory. Silver Roman coins and other evidence of international commerce have also been found at the site. The maha stupa partially collapsed due to heavy rains that battered the city in October 2019. It was later reconstructed with government funds.

Kothapalli Venkataramana of the Buddhist Society highlighted the need for maintaining a buffer zone around the Buddhist complexes on Thotlakonda, Bavikonda and Pavuralakonda with a blanket ban on construction of all sorts in the buffer zone. Citing an Andhra Pradesh high court judgment delivered in November 2016, Venkataramana contended that the construction of the guesthouse amounted to contempt of court.

The survey No 314 of Kapuluppada village reveals the fact that the area protected under the Ancient and Historical Monuments, Archaeological Sites and Remains Act is, in fact, is spread over 33,000 acres on a cluster of hills. But successive governments, Venkataramana alleged, have fudged revenue records to downsize the extent to a few hundred acres, resulting in the alienation of vast lands with Buddhist sites.

Activists also accuse the district revenue authorities of fabricating fictitious survey numbers within the old survey number (314-old) to hide Buddhist sites. This, Rani Sarma, the former president of the Visakhapatnam branch of Indian National Trust for Art and Culture, says was done as part of a move to legitimise the state-sponsored grabbing of lands that fall under heritage sites.

Activists say that over a period of three decades, successive governments facilitated the alienation of lands in the area, either for its own utilities or for private usage. The previous TDP government headed by N. Chandrababu Naidu allotted 15 acres in area for the Film Nagar Cultural Club and 300 acres for Greyhounds, the state’s elite police force.

“Capital or no capital, threats continue to loom over heritage sites in Visakhapatnam for the past three decades and we are struggling to protect them,” says Rani Sarma. #KhabarLive #hydnews