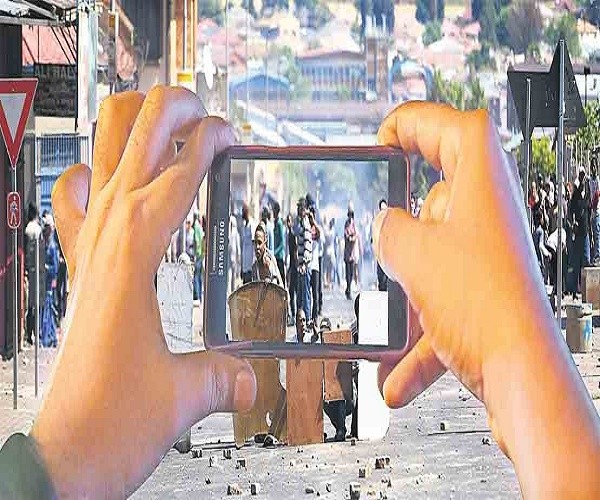 Cellphone has changed us from being seeing witnesses to being recording witnesses, and who share what they have seen instantly. The idea of the ‘public sphere’ has haunted discussions, academic and general for a while now.

Famously defined (by Habermas) as the space of civic speech and debate, fiercely contested in the form of feminist interrogations (Nancy Fraser) and digital culture studies (Ann Travers) who posit ‘counterpublics’, the term and concept have, so to speak, been more public than anything else Habermas ever wrote. That said, a visible (I use the term for reasons that will emerge soon) transformation of the public sphere and the public space is evident today.

This transformation is made possible by assorted wearable technologies and recording mechanisms of cellphones. When civic speech, dialogue, debate and exchanges are treated as the defining markers of the public sphere, it assumes, automatically, a participation by the members of the public in the form of active social interactions. Effectively this means that we create the public when we talk, debate, dispute. There is reason to believe that the shape and content of the public sphere are increasingly determined by passive participation as well.

Civic Spectatorship
Filming on phones, selfies and other forms of recording that immediately go viral on Facebook and Instagram constitute a public sphere through civic spectatorship (Cram et al 2016). This triptych of filming-uploading-forwarding is arguably one of the main modes of participation today. Two specific results ensue from this triptych.

One, it changes the mode of bystander or eyewitness participation. S/he is now not someone who sees and walks away. Rather, s/he is a mnemonic device, recording and committing to digital memory the event s/he witnessed. Things have come a long way from when photographers in warzones filmed/photographed disaster (the napalmed burning girl from Vietnam would be iconic of this).

Today, everyone has the potential – whether realised or not – to function as a crucial witness, accompanied by documentary/photographic evidence. The cellphone has changed us from being seeing witnesses to being recording witnesses, and witnesses who share what they have seen almost instantaneously.

Mobile Witnessing
Two, the triptych enrols distant others also as witnesses to whatever has been filmed (an accident, a funny event, a tragedy, a riot). In other words, the event, which by definition occurs in a specific place at a specific time, transmitted instantly across spaces and peoples via digital technology blurs geographic distance, borders and spatial difference.

Anna Reading’s work on what she termed ‘mobile witnessing’ noted how the London Underground bombings went live from the phones of victims who filmed themselves trying to survive in the smoke-filled train. But the larger point about this form of filming-uploading-forwarding is that the present space where the witness is physically present (the eyewitness) is brought into the visual and, therefore, partially experiential field of somebody elsewhere.

The converse is also true: the distant viewer appears on the event-zone through the two-way communications of a cellphone (via various chat applications, for eg). ‘Mobile’ witnessing is the mobility of the distant witness to the scene, becoming an eyewitness too. It redefines the visual field and aural landscape of the event.

Major Shift
Taken together, these two constitute a major shift in the nature of the public sphere. As passive participants, these witnesses-with-cellphones fashion the public space through acts of consumption. They do not necessarily engage in debates, but their participation is no less crucial when they record and transmit, and thereby widen the scope of consumption of the event. This development alters the emphasis on the civic actor (the one who speaks, debates) to the civic spectator or witness.

Meanings emerge in the process, here, of not civic debate but through the interpretations of various spectators, including distant ones. They ‘read’ the events, now recorded and transmitted (and archived for future retrieval), and post their responses on any social media platform that then become a frame for attributing any meaning to the event.

Meaning-Making
What we can then see is that making visible and audible the events unfolding before the human eye and the cellphone camera (it is no longer possible, except via surgery, to separate the two!) is a form of engagement with the event. Spectatorship is not passive and innocent – if it ever was – but a form of social engagement in meaning-making.

At one point in cultural history, one could have asked, ‘how come there was a camera present, serendipitously, at the event?’ Today we assume somebody will film whatever is happening. Viewing and listening are integral to the reformatting of the public sphere, and the function of the eyewitness is to enlarge the spectator-base by bringing the distant other here.

Undoubtedly, this means that contests over meaning-making, often due to mischievous photoshopping of whatever was recorded, will increase. It is possible to see this debate over ‘what happened’ and ‘what was filmed’ itself as a major shift in the nature of the public sphere. Reliant, once, upon the recalling abilities of eyewitnesses, the public is now defined by your view, my view and whatever ‘developed’ in the cellphone’s archives.

Finally, the nature of the public, which we can now rechristen as the witnessing public is also widened out into a diffuse audience of observers and listeners. This diffuse audience is also responsible for what we are, and remain, as public because they actively collude in meaning-making of the events they have been privy to, thanks to Instagram and Facebook.#KhabarLive