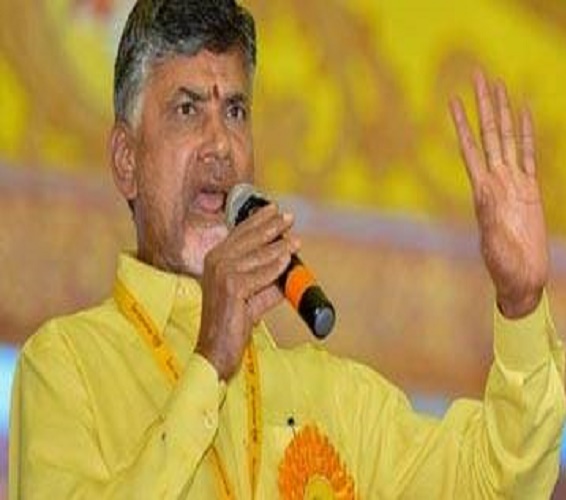 Naidu, India’s first chief minister to master the art of effective communication through perception management, was quietly working on a plan for the past one year.

Chandrababu Naidu Turns the Tables on Jagan Reddy and BJP, Arrests TDP Slide in Andhra
Bengaluru/Hyderabad: TDP chief and Andhra Pradesh chief minister Nara Chandrababu Naidu has killed two birds in one stone. Firstly, he silenced his critics by withdrawing the ministers from the Modi government at the Centre, and then poured cold water over his main rival YSRCP chief Y S Jaganmohan Reddy’s dreams of going with the BJP.

Chandrababu Naidu knows what he does. He won’t do anything without calculating the risks involved. Taking on the ally BJP and withdrawing the ministers, Naidu has not come as a surprise to anyone who understand the style of politics –“Telugu Bidda” practices.

The TDP came back to BJP-led NDA a month before the 2014 Lok Sabha polls. It had severed ties with the BJP after its debacle at the hands of Dr Y S Rajasekhara Reddy-led Congress in 2004. Naidu had even called BJP a communal party which had drowned him with it.

The popularity of Jaganmohan Reddy and the Modi wave in urban pockets of AP forced Naidu to go for an alliance with the BJP. He had taken a huge risk and it had paid off finally.

But the relationship has never been the same post results. Naidu was miffed with Modi over allocation of portfolios to no special aid to Andhra Pradesh.

Realising that BJP was keeping back channel talks with the YSRCP open, Naidu decided to pull the plug. After Jaganmohan Reddy gave an explosive interview to News18 clearly saying that he is willing to go with the BJP if the special status to AP is granted by the Centre in last January, Naidu decided to act. But he was aware of what was going to happen and had been preparing his party for that.

Naidu, India’s first chief minister to master the art of effective communication through perception management was quietly working on a plan for the past one year. He had used every opportunity to tell the voters that BJP was responsible for their plight and an alliance with them was of no use.

Without using the word “betrayal”, he had conveyed the subtle message to the people a year ago. Closer to the final show down, Naidu became more and more vocal directly attacking the BJP for not granting the special status to AP.

In fact, Jagan was the first to use special category state card to embarrass Naidu. He had said that Naidu had compromised the interests of AP by aligning with the BJP for the sake of power. It actually worked for some time and the TDP was on back foot. A shrewd politician Naidu quickly realized the dangers of allowing such a narrative to grow and turned the tables on Jagan by pulling out of Modi Cabinet. Walking out of the NDA alliance is now just a matter of days and Naidu has successfully arrested the slide.

Commenting on this, Dr M V Mysura Reddy, former AP Home Minister and a veteran leader said “Naidu is extremely intelligent. He has now put a resurgent Jagan on back foot. Jagan can’t go with the BJP even in 2019 elections because the public mood is against them. He will have to fight on his own. Jagan had dared Naidu to back a no confidence motion against the Modi government. Even before Jagan could act upon that, Naidu has pulled the plug. Now Jagan can’t do anything. Can’t attack Naidu. Can’t even attack the BJP. He is now in a fix”.

Dr. Reddy feels that Jagan’s overtures to the BJP will be seen as a “betrayal” by the people of AP and he will have to fight the battle on his own. “If he says something against BJP, his cases will come back to haunt him. Because of that they will be forced to remain quiet. It helps Naidu to improve his position once again”.

According to another leader film star Pavan Kalyan’s “Jana Sena” may go for an alliance with the Congress and Communists in the 2019 elections. Commenting on this Dr. Reddy said “going with them makes his party an all caste and religion party. Otherwise it will be treated like a Kapu party. If they fight well, they can even create a hung Assembly in the 175 member house forcing TDP and YSRCP to go for a post poll deal with them”.

A top leader of the YSRCP who spoke to News18 on condition of anonymity agreed with Dr. Reddy’s assessment of the situation. He said “now we can’t go with the BJP before the elections. If we praise BJP or go with them it will go against us. We need to play our cards carefully. He has attempted to take the steam out of Jagan’s ongoing Padayathra across the state”.

However the YSRCP is confident of giving a good fight in the next year’s elections. A senior MP of YSRCP said “in 2014, TDP, Janasena & BJP together got 45% votes and we alone got 44% votes and lost by a slender margin. Minus an alliance, the TDP will get less votes and it will help us.

Last time Naidu won because of his tactical alliances. This time he can’t repeat it. And Jagan’s public meetings are drawing a huge crowd everywhere. Left with no other choice Naidu left Modi Cabinet. Not on his own. And the people of AP are not fools. They understand everything”.

But all players in AP politics know that Chandrababu Naidu can spring a surprise any time. #KhabarLive