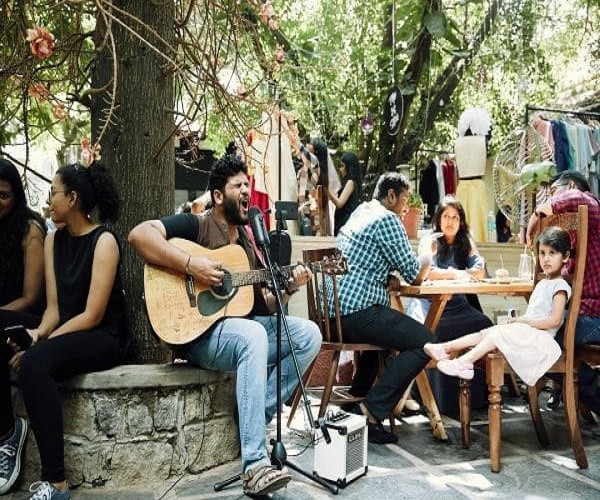 Good food, good music and a vibe that’s chilled out might be the perfect way to spend a weekend. When you fuse the concepts of flea market and a pop-up bazaar, you get a weekend turn up that encompasses music, comedy acts and, most importantly, good food of all sorts.

Going beyond pani puri, bhelpuri, and other routine street-eats, fun lovers can take their pick from a smorgasbord of delicacies, buy ensembles straight off the runway, all this, while listening to great music churned out by local talent. The past couple of months have witnessed plenty of such pop-up events being held at various venues in the city.

Top Stitch, Firki, Sunday Soul Sante to name a few which witnessed an eclectic mix of boutiques, jewellery designers, footwear designers show off their collections to a niche crowd. Designers showcased their collection under colourful canopies, as visitors strolled along having a dekko at the merchandise.

“Our idea was to put together an event where the entire family can come together, shop for the whole family, and grab a bite to eat. Top Stitch was also unique because we got designers who have shown their collection at the Lakme Fashion Week, so you got all of them together under one roof,” says Smita Reddy, curator, Top Stitch.

Their first event at N Banyan also had well-known band Threeory belting out their popular compositions. The vibe was a chilled out one which was recreated again at Autumn Leaf Café recently, where the clothes and accessories were more geared towards the upcoming festival of Diwali. They have already done three events in Hyderabad and plan to do another one in late January.

The latest to join the bandwagon is ‘Bring Your Own Belly’ to be held at Hitex in Madhapur described by its curators as a ‘mega food festival’ replete with live music and stand-up comedy acts. “Expect to see a kind of food town with stalls from almost every restaurant in the city. There will be 70 stalls offering a variety of food from people who are home bakers to IT professionals passionate about cooking,” says Vanamalla Teja, one of the organisers whose Tukio Events is the brainchild behind the event which took a year to plan.

The idea behind this is to enable people to spend close to 2 to 3 hours at the venue and eat their fill and shop through stalls which will also be selling household items. Among the other attractions the organisers have planned is a food workshop with Masterchef contestant Bharti. So, those who want to take a shot at whipping up fine cuisine at home can do that here. #KhabarLive

Why ‘Hyderabad State’ Experienced ‘NRC Exercise’ On 1948 Merger With ‘Indian...