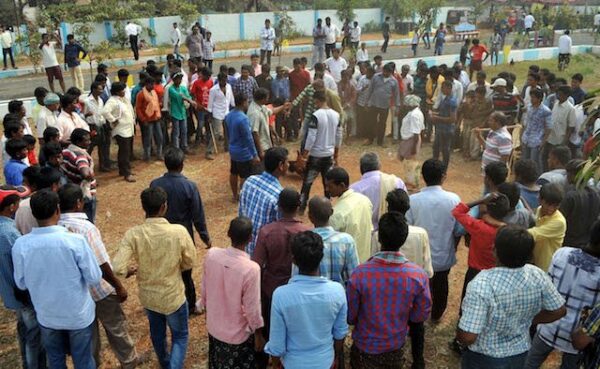 The administration remains a mute spectator during every festive season in prohibiting cockfights since the festival receives active political patronage.

Yalamanchili Subba Rao, a farmer from the capital region in Amaravati, galloped into a sprawling pandal with a bulging cash bag in his arms to bet on the rooster of his choice. The ring is surrounded by a huge gallery packed with crowds seated in rows, watching the fun in a mango garden at Pedapaka, 10 kms away from the West Godavari district headquarters in Andhra Pradesh, which beckoned lovers of cockfights from far and wide.

This place is considered a safe haven for the sport since it allegedly received patronage from the local TDP MLA Chintamaneni Prabhakar, who is also the government whip. No police officer ventured into the venue to enforce the law – cockfights are illegal. Even media personnel sought to play it safe.

The ground is circular in shape with enclosures around, and the spilled blood epitomised the valour of the game birds. There was a beehive of activity, with punters letting their birds into the battleground, their masters holding them in arms and caressing their feathers, preparing them for the blood sport.

“I brought Rs 10 lakh. I am sure the MLA’s birds will tear those of rivals into pieces,” says Subba Rao, with a battle cry writ large on his face while comforting his son, a sixth standard student, on a sofa in the front row. They arrived from their village in their SUV, a brand-new car. His 60 acres of agricultural land, bought by the government under the land-pooling scheme for capital construction in his native Mandadam village, reportedly fetched him Rs. 90 crore. In addition, he is receiving Rs. 50,000 per acre per year, as a solatium from the government. Besides, he earned not less than Rs. 3 crore as commission for brokerage in land transactions in the last three years in the capital region, he says.

Subba Rao was egged on by a punter, “MLA’s birds gained an upper hand over those on the other side six times in a row since morning.” An enthused Rao was prepared to bet Rs 25,000 in each round of the game. A ringside view of this writer revealed that betting ranged up to Rs 3 lakh for each game that took place between the owners of the birds in the main ground. Similarly, betting which took place in the galleries, involving onlookers, crossed Rs 25 lakh each time, it is said. An organiser said 20 games took place from noon to evening on Day-1, and it will go on at a similar pace in the next two festive days as well. Each game finished in a span of hardly five minutes, even as another round would begin with a gap of 15-20 minutes which is required to bring the birds into the ground, selecting the “best ones” to pit against each other and arming them with sharp-edged knives.

ALSO READ:  Why Our National Sports Awards Are Getting More Controversial?

The sport continued even after sunset under floodlights.

Video-graphing and taking photographs were strictly prohibited. All the three gunmen, apparently attached to the MLA, were at their best enforcing the unwritten law. A visitor who came from Hyderabad was thrashed for trying to shoot the event with his mobile camera. When a student resorted to a similar act, a gunman menacingly approached him in the galleries and saw that the visuals were erased.

The MLA is a multi-tasker. He is said to be rearing birds in his farm in his constituency and allegedly organises the cockfights. Besides, he himself plays the game by letting his birds into the ground.

Koppaka, a nondescript village, has dominated the delta areas like Bhimavaram, Narasapuram and Akiveedu in West Godavari district in cockfights in the recent past, drawing crowds from Guntur, Krishna, East and West Godavari districts. Its fame is credited to Prabhakar’s prowess to keep the officialdom away.

One has to pass through several layers of checking points, heavily guarded by an army of his followers, before reaching the venue. Passes were issued to the visitors under the nose of the MLA and his close aides.

Subba Rao’s son was heard asking his father, “What’s the fun of the fights without knives tied to the cocks?” The boy was obviously referring to the Supreme Court’s direction for the sport.

There were no signs, whatsoever, of executing the Supreme Court’s ruling anywhere in the Krishna and the Godavari delta regions. East Godavari is represented by Home Minister N. Chinnarajappa, and the cockfights with high-staked betting went on in a hassle-free manner in Konaseema region that forms part of his district on the first day. Reports suggested at least Rs 500 crore changed hands in the name of betting in the two Godavari districts on Day-1 and another Rs 100 crore in Krishna and Guntur districts. Attempts to reach out to the West Godavari SP M Ravi Prakash Babu over phone, to know the fate of the high court direction did not yield results.

The administration remains a mute spectator during every festive season in prohibiting cockfights under the Andhra Pradesh Cruelty Against Animals Act, 1960, since it receives active political patronage. There were instances where senior police officers, who attempted to enforce the rule of law during the festival period, were shunted out. Besides, public representatives of the ruling party resorted to protests, seeking to rein in the tough cops so as to ensure that cockfights would go on unchecked. #KhabarLive

The ‘Coming Storm’ Of Covid-19 ‘After Effects’

Inside Xiaomi’s ‘Gameplan’ To Get The Next Billion In India