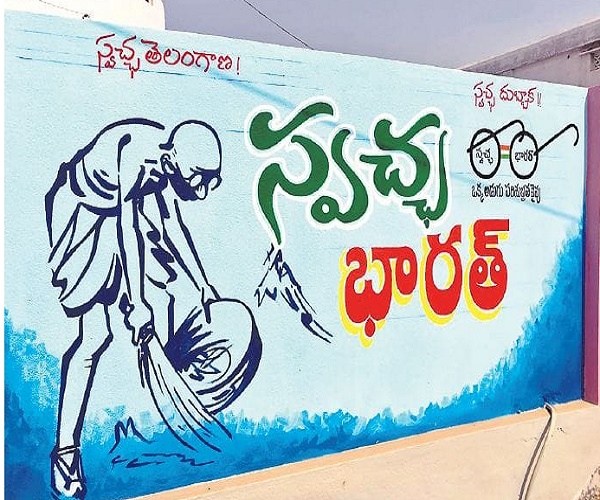 Till a few years ago, the picture of sanitation in India was very different, with over 50 per cent of the country not having access to safe drinking water; 37.7 million Indians affected by waterborne diseases yearly and nearly 320 children dying every day of diarrhoeal disease. The call for a ‘Swachh Bharat’, or ‘Clean India’ Mission, has, therefore, found an unparalleled resonance with millions of Indians.

Prior to the launch of the Mission, a mere 39 per cent of households in India had toilets. Today, as per the Government of India’s monitoring system, over 99 per cent of all households have toilets, with 31 States/UTs declared as Open Defecation Free (ODF). According to a 2018 WHO study, the gains realised in sanitation since 2014 had saved the lives of 305,000 Indians. The nation is now on path to achieving its ambitious goal of full ODF status by October 2019, fortuitously coinciding with Mahatma Gandhi’s 150th birth anniversary.

Telangana’s ODF Status
Telangana remains one of the three States/UTs, along with Goa and Odisha, which is yet to achieve ODF status. The State’s toilet coverage currently stands at 97 per cent, despite the Mission deadline looming.

ALSO READ:  Have You Tried A 'Summer-Friendly' And 'Sweat-Free' Mattress Yet?

Telangana has taken some assertive steps in designing programmes, especially those addressing water security, with vision and scale. Mission Bhagiratha, Mission Kakatiya and major irrigation schemes like Kaleshwaram Lift Irrigation have seen mammoth investments and have huge potential to directly impact the lives of the citizens. While these and other initiatives of the State government are commendable, many children under-five still die each year from environment and sanitation-related causes in Telangana.

Hygienic Behaviour
Though the State has achieved substantial coverage of household toilets, only 16 districts of the 33 have been declared ODF. It is estimated that nearly 1.75 lakh new toilets would need to be built, along with appropriate behaviour change communication approaches, to achieve ODF status in the remaining 17 districts. Further, an estimated 1.35 lakh households across both ODF and non-ODF districts were added newly after the 2014 baseline that would require more support and fund allocation.

But, will the presence of toilets in every household truly make the State ‘Swachh Telangana’? What Telangana needs is to achieve 100 per cent sanitation, going beyond 100 per cent toilet coverage. Global experience shows that access to toilets is only half the battle in the fight to end open defecation. Toilets may be unused for several reasons.

As per a Government of India study in 2011, the poor quality of construction of sanitation facilities remains the single largest reason for not using toilets. Non-availability of water in households also leads to poor usage and maintenance of toilets. Above all else, ending open defecation requires a paradigm change in mindsets and behaviours across communities.

The State’s effort on constructing toilets is essential, but if this ‘hardware’ is not complemented with the requisite ‘software’ – behaviour change communication – we may never be able to eliminate open defecation. To achieve and sustain ODF status, the State needs to accelerate the promotion of hygienic behaviours, besides managing solid and liquid waste effectively.

This would also yield improved health and social benefits. An action plan focusing on capacity building of government functionaries and institutions with adequate budget, competition schemes, as well as Water, Sanitation and Hygiene (WASH) marketing, monitoring and reporting needs to be developed and implemented.

Build Capacity
The Telangana government has initiated interventions such as promotion of Village Water and Sanitation Committees to mobilise communities for the construction and usage of household toilets, and mapping of the Village Swachhta Index. However, the capacities of these committees need to be enhanced and their interest sustained to reach the last mile and maintain ODF status.

ALSO READ:  Can We Get 'Safe Food' Home Delivered?

Moreover, promoting community and participatory social audits, and establishing citizen learning centres for sharing experiences can strengthen the policy environment and decision-making process. These steps can go a long way in realising the dream of a ‘Swachh Telangana’.

The Takeaways
The achievement of ODF status in Telangana will contribute substantially to reducing the disease burden and impact the under-five mortality, morbidity and maternal mortality rates in the state. This will have a positive impact on all other human development indicators. As per a UNICEF study, households living in an ODF environment also save around Rs 50,000 per annum by substantially reducing the health expense burden and time lost due to sickness.

The need of the hour in Telangana is a strong call to action from the highest level of State government, and convergent action between departments, influencers and civil society, with the realisation that safe sanitation is the basic right of every child and every citizen. #KhabarLive

Life Inside ‘Barricades’ In #CovidZone Containment Areas In Hyderabad

Why All The ‘Farmers’ In Krishna District Of Andhra Pradesh ‘Keeping...

Dear Modiji, Do You Know Why We, The People Of Andhra...