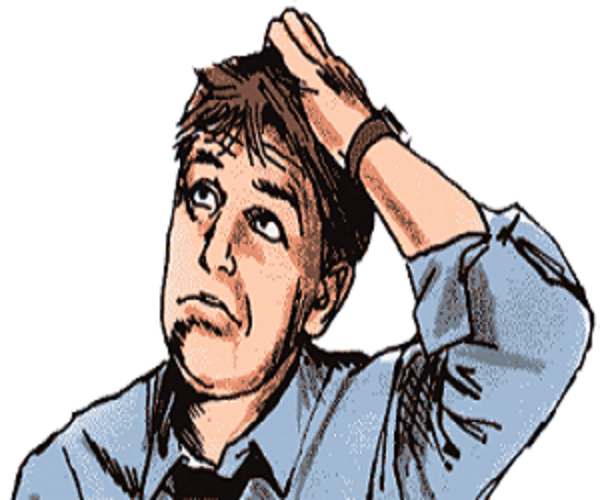 Raghav Mahajan a fresh MBA graduate from Global Future School of Management (GFSoM) suffered serious injuries yesterday night after he was involved in a vicious fist fight with a fruits vendor Ramlaal at a local market.

According to eye-witness accounts the argument started when Raghav spent one and a half hours carefully selecting apples from Ramlaal’s fruit-cart but finally choose not to buy even one apple.
Raghav’s actions are reported to be an immediate consequence of his boss scolding him for not doing an “apples to apples comparison” while comparing two stock market reports.

While his boss used a common phrase from corporate jargon, Raghav seemed to have taken the words literally and spent good amount of time at Ramlaal’s cart comparing all apples with each other, which caused the whole incident.

While fruit-vendor Ramlaal could not be reached for comments but Raghav who is admitted to Nanavati Hospital spoke to our reporter and described the whole incident in detail:

“It’s been two months since I have finished my MBA at GFSoM and joined this company called Brown Ocean Equity Advisors. These two months have been a huge learning experience for me at a personal and professional level. I have been learning a lot of corporate terminology.

Yesterday evening when my boss mentioned that I have not been doing an apples to apples comparison, it was an eye opener for me. I realized that ever since when I have been buying fruits, I always been looking at apples individually for any cuts or smudges and then selecting them. I never actually compared one apple to the other, never felt the need to do that. But after my boss mentioned it yesterday, it seemed like a very logical thing to do.”

“Hence I went to the fruit market after office and I carefully compared all apples on the cart with each other for good one and a half hours before finally selecting one apple to buy. But when I was about to pay for it, I was suddenly hit with the fact that there are other carts which may have comparatively better apples. Without visiting each and every cart in market I won’t be doing a true apples to apples comparison. Hence I kept that apple down and started to move on to another cart. But that fruit-vendor suddenly got angry and started using swear words on me, something which I couldn’t bear. I am not very proud to say that things got ugly afterwards,” Raghav concluded with a look of remorse on his face.

Sources have told INNLIVE that this is not the first time Raghav has taken corporate jargon too literally. Couple of weeks back Raghav was reportedly shocked when a female senior manager asked him to “touchbase” with her next week and provide project updates. He was about to complain to the HR about a corporate casting couch situation, but calmed down when his colleagues explained that the female manager simply asked him to contact her next week and provide project updates.

While this incident has become a part of another office gossip around Raghav’s naive behavior, noted clinical psychologist Dr. Chadha offers an alternative explanation for Raghav’s actions.

“When professionals use corporate jargon such as “keep me in loop”, “I’ll circle back with you”, “this is not an apples to apples comparison”, “let’s not boil the ocean” etc., some individuals who are even new to these phrases quickly come to an understanding that these phrases are just metaphors with a different implied meaning. But individuals such as Raghav are different.

Raghav might actually be suffering from an acute case of Literal Comprehension Syndrome (LCS) wherein a subject can take a very long time to understand any type of jargons, metaphors and even analogies. An LCS ridden individual takes every word told to him on face-value and acts accordingly. Living in highly jargonized environments such as modern corporate offices can be harmful for physical and mental health of LCS patients.

A win-win strategy for everyone around such patients should be not to sugarcoat things for them and encourage them to think out-of-the-box; only then they can achieve complete synergy and become gate-keepers of excellence,” Dr Chadha explained. #KhabarLive