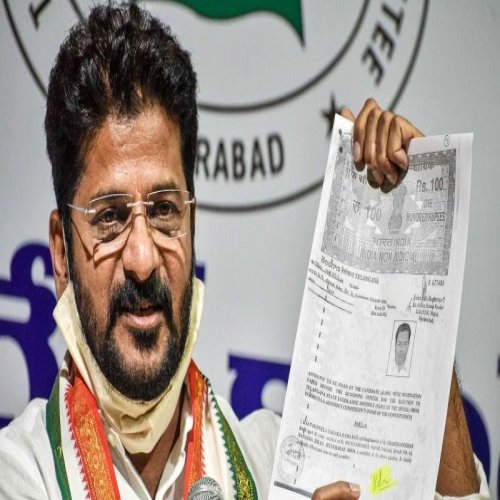 At a time when the Telangana Rashtra Samithi government has been suppressing the opposition parties using the police force and preventing them from taking up agitations, Telangana Congress working president and Malkajgiri MP A Revanth Reddy is the only person who appears to be going aggressively against the TRS government.
Revanth filed a contempt of court petition in the Nampally criminal courts against the Telangana police for arresting him in connection with a case of operating drones near the farmhouse of Telangana minister K T Rama Rao at Janwada on the outskirts of Hyderabad.
The contempt petition was filed against Madhapur assistant commissioner of police Shyam Prasad Rao and Narsingi inspector Gangadhar for arresting him three months ago in connection with unauthorised drone-operating case.
However, Revanth argued that he was not served any notice by the police under Section 41-A of the Criminal Procedure Code before arresting him.
“This is against the Supreme Court judgement which clearly said the police should serve notice under Section 41-A of CrPC to the person concerned before arresting anybody,” he said.
The MP said the Narsingi police had not served him any such notice and straightaway arrested him against the rules.
According to this section 41-A of CrPC, the police officer shall issue a notice directing the person against whom a reasonable complaint has been made, or credible information has been received, or a reasonable suspicion exists that he has committed a cognizable offence, to appear before him or at such other place as may be specified in the notice.
If such person complies and continues to comply with the notice, he shall not be arrested in respect of the offence referred to in the notice unless, for reasons to be recorded, the police officer is of the opinion that he ought to be arrested.
Only if such a person fails to comply with the terms of the notice or is unwilling to identify himself, the police officer may, subject to such orders as may have been passed by a competent court in this behalf, arrest him for the offence mentioned in the notice.
Meanwhile, the Telangana High Court granted an interim stay on orders issued by the National Green Tribunal, Southern bench, on May 5, ordering a committee of central and state officials be constituted to investigate whether a farmhouse reportedly owned by Municipal Administration Minister K T Rama Rao, at Janwada in Ranga Reddy district, violates Government 0rder 111, a zoning law meant to protect the Himayathsagar and Osmansagar lakes.
The Division Bench of Justice A Rajashekar Reddy and Justice P Naveen Rao issued the interim orders in two petitions.
One petition was by Mr Rama Rao, challenging the NGT order that had issued notices directing him to explain the contentions of the petitioner A Revanth Reddy, a Congress MP and petitioner before the NGT, that KTR has constructed a farm house in violation of GO 111.
Another writ petition, filed by Pradeep Reddy Badwel, says that he (Badwel) was the owner of the property, where the alleged construction has been made in violation of GO 111 and he being the necessary party has not been made a party in the petition submitted by Mr Revanth Reddy to the NGT.
After hearing the contentions of S Niranjan Reddy, senior counsel for the minister, and Sri Raghuram, senior counsel for Mr Badwel, the bench issued the interim stay orders.
In the interim orders the court said: “This court is of the opinion that prima facie, the exercise of NGT Chennai order is erroneous and is in violation of Sec. 14(3) and Sec. 19(1) of the NGT Act, 2010. There shall be an Interim Stay.”
The Bench in its order said: “The application before the NGT is that the construction has been made in violation of GO 111, dated 8-3-1996, which is not issued under statute, which aspect is not considered by the NGT.”
Further, the NGT at the first instance, should have ascertained the cause of action of the dispute, and then determined the date attached to the cause of action, the Bench said. The construction was done in 2015 whereas the petitioner, Mr Revanth Reddy, approached the NGT on 30-5-2020, which is contrary to Sec. 14(3) of the NGT Act, 2010, which says that the cause of action should be within six months from the cause of action, after which no application shall be entertained. #KhabarLive #hydnews
ALSO READ:  'Dowry Death' - How True Is This Case In Court Room?
Brandbacker

Why ‘Women Political Prisoners’ are Being Tortured in India’s Jails?

KCR To Embark On ‘Reforms’ Agenda In Telangana

Why TRS Leaders Are ‘So Irresponsible’ As Home Minister Mahmoud Ali...