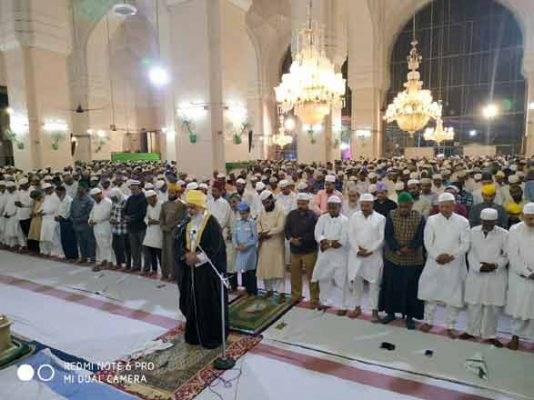 The holy Shab-e-Meraj will be observed tonight across the country with due respect and religious fervour.

The Muslims every year on the 27th night of the Arabic month of Rajab observe the occasion. On this night, Prophet Muhammad (PBUH) had embarked on a special journey to meet Allah.

In the journey, the Prophet (PBUH) travelled on the “Buraq” to Heaven where Allah gave him instructions to take back to the faithful regarding the details of prayers.

In Hyderabad, Shab-e-Meraj (night of ascension) was observed by the Muslims on Wednesday night.

An important event in the Islam, it falls on the 27th day of the seventh Islamic month of Rajjab. To mark the occasion, special religious programmes were held at various mosques in the city.

Special religious discourses and programmes were organised at various mosques. Many mosques around the city were illuminated on the occasion. Heavy turnout of devotees was witnessed at Shahi Masjid Bagh-e-Aam, Jamia Masjid, Musheerabad and other important mosques in the city. #KhabarLive

Hyderabad To Be ‘Epicentre’ Of National Politics!