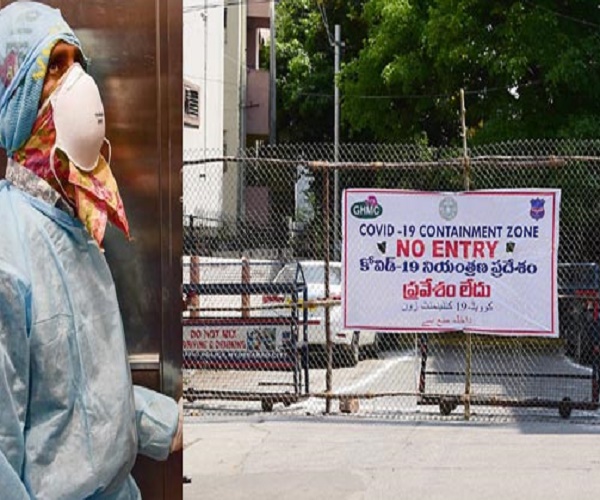 At last, the most feared stage of CoronaVirus – ‘community transmission’ has begun in Hyderabad. The wort-affected area Jiyaguda is the epicentre of this virus, according to medical and health experts.

Jiyaguda among worst-affected areas in Hyderabad; authorities yet to zero in on the single reason for rampant spread. As the lockdown restrictions are being phased out one by one, unspoken are the fears about community transmission of COVID-19 across the city. Indications of Stage-III community transmission are already palpable in a few areas, though authorities have not admitted it so far.

Jiyaguda is one such locality where no single reason for the rampant spread could be zeroed in so far by the authorities. All that the officials could do was to make surmises based on the patients’ movements.

With nine containment zones, close to 70 persons testing positive for coronavirus, and seven deaths, Jiyaguda is one of the worst affected areas in the city. Very recently, 27 persons who are the kin of COVID-19 index cases from here tested positive in a single day.

The infection could be sourced for a few cases here. According to officials, the first case was that of a person from Uttar Pradesh, who had a travel history to Agra and to Delhi from there. From Delhi, he boarded Telangana Express to the city, where, officials surmise, he might have contracted the infection.

One more person who had traveled to UP for brother’s marriage has tested positive too, sources say.

The source of infection remains even more obscure for others. Among them is a vegetable seller from the Sabji Mandi of Jiyaguda who had tested positive. From him, 12 of his family members contracted the virus.

A person who worked in a paan shop at Somajiguda was also diagnosed positive. He and three others were surmised to have contracted the virus from a Karwan mosque where they went to pray. “People seemed to have also got infected at a public sector bank’s local branch where they went to withdraw money deposited by the government,” an official said under the condition of anonymity.

Evidence of Stage-III transmission comes from other localities too. A fresh case surfaced in Dhobighat, Yakutpura where the infection trail is missing. The patient in question went to a corporate hospital in Jubilee Hills with fever, where his samples were collected and sent for testing. His daughter, too, contracted the virus from him.

In Vanasthalipuram, 10 persons who bought milk from an infected person have tested positive when they approached with symptoms, officials said. Many others who might have bought from the same person have remained anonymous, as they may have been asymptomatic, and no efforts are made to trace them out.

“Community transmission has already started, owing to several asymptomatic patients moving around without any restrictions. With more relaxations in lockdown, we dread that the situation could go out of hand,” official monitoring the situation said. #hydnews, #KhabarLive