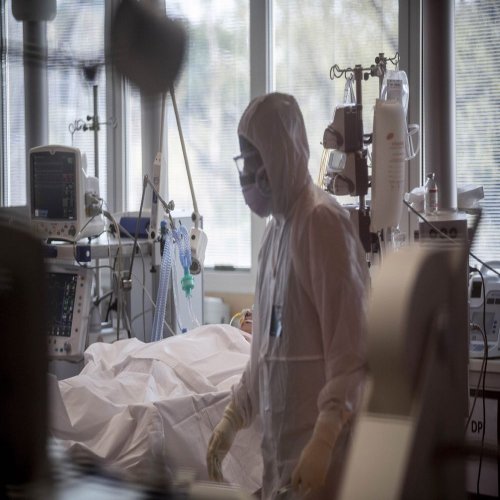 A peek into the long shifts pulled by doctors living inside the isolation facility reveals the exhaustion, fears and heroism of healthcare workers across the country as they struggle to contain the COVID-19 pandemic.

If the world had not been in the throes of a pandemic, Dr. S Nagarjuna would have been married to his college sweetheart on April 8. Instead, the neurosurgeon spent the day walking down the aisle of a Covid-19 ward, dressed in a protective suit to treat 30 patients, on a 12-hour long shift in Hyderabad’s Gandhi hospital, Telangana’s Covid-19 quarantine, isolation, and treatment facility. 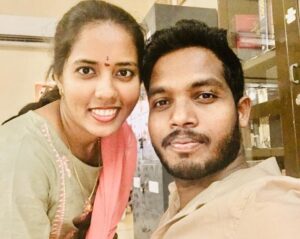 His fiancée, A. N. Priyanka, a pharmacologist based in Guntur district of Andhra Pradesh made just one video call to him on the day to wish him well. Dr. Nagarjuna’s elderly parents, who were expected to welcome over 2,000 guests at his wedding for which a marriage hall was booked in Hyderabad, reluctantly remained in their hometown in Nagarkurnool district in Telangana; worried for their only son who had turned 30-years on March 30.

While India’s 21-day lockdown has brought daily life to a grinding halt, Dr. Nagarjuna and his fellow doctors have been working feverishly in monk-like isolation: Hundreds of doctors at Gandhi hospital, Dr. Nagarjuna included, have moved into campus hostels meant for postgraduate students to ensure they don’t infect their families back home.

A peek into the long shifts pulled by doctors living inside the isolation facility reveals the exhaustion, fears and heroism of healthcare workers across the country as they struggle to contain the pandemic.

One day at a time
Dr. Nagarjuna wakes each day to worried calls from his parents who are in their 50s.

“They call and ask about PPE and I tell them all is well. I tell them we—government, doctors and patients—are all working together on this,” he said while talking to #KhabarLive before a morning shift. “I basically lie to ease their tension.”

The shortage of PPE, or Personal Protective Equipment, is one of the biggest challenges facing healthcare workers across the world.

In Telangana, doctors in teaching hospitals have been protesting lack of safety gear after 12 of them working in Niloufer hospital were exposed to a 3-year-old Covid-19 patient. In Anantapur, four doctors tested positive for Covid-19 on April 9. 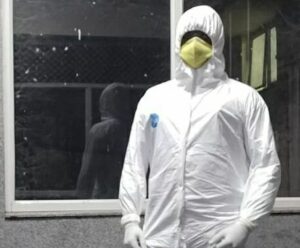 “In Gandhi we started getting PPE in the past one week. Even now just 20 percent of the doctors get N-95 masks. I don’t tell my parents any of this,” he said. His fiancée who knows better because she is a doctor herself, however, remains concerned despite his assurances.

As doctors on the morning shift prepare to head to the hospital, they quickly catch up with their colleagues returning to the hostel after night shift in the wards.

“Usually patients who have been waiting for test results get agitated during the morning shift. We are expected to be the liaison between the hospital and them,” he said. With the number of cases increasing, worried patients under quarantine or isolation in most Covid-19 facilities have been waiting at least for two days to get their test results.

A typical morning checklist involves logging cases reported the previous night and preparing logs for samples collected overnight; listing the patients by their numbers or names and fanning out in groups of four or more behind the professors leading the rounds.

The junior doctors walk in orderly lines and touch patients only when asked to examine them.

“Getting the PPE on is a task. The first layer of overalls, shoe-covers, goggles and head cap take the air out of you. Then comes the second protective layer. We have been wearing two sets of gloves so that one pair can be removed after touching one patient,” said the neurosurgeon.

The blazing heat of summer is still a few weeks away, but the ambient temperature in Hyderabad is already 35 degrees. The PPE, an essential layer of protection, has made doctors sweat so profusely that several at the Gandhi Hospital are battling dehydration.

In Covid-19 Gandhi hospitals, the ground floor and the first floor have been lodging paediatric patients while the rest of the floors remain demarcated for adults.

Caring for patients includes offering them what Dr. Nagarjuna calls “holistic support”, even as he admits there are too many patients and not enough time. 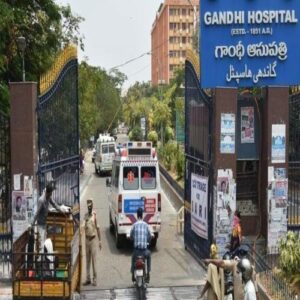 “Medical needs, social needs and emotional needs are all to be taken care of by a single doctor who attends to at least 30 patients a day,” Dr. Nagarjuna said. “Most patients are worried for their health and they ask us about their children who are left in the care of relatives or friends. They ask us if people will stigmatise them if they make it out of the facility after being cured. In most cases they think the cure will never come.”

As the number of patients continues to grow, each doctor is left to give mass counselling instead of individual support. In some cases, only phone calls from family take care of the situation better, the doctor said.

While this routine takes almost half a day, at lunch time too the doctors rarely let their guard down.

“Removing the PPE, we have lunch for half an hour and get into another PPE to continue patient care,” Dr. Nagarjuna said.

With Swiggy and Zomato out of the question, doctors have been eating food from hostel mess halls which is also being served to the patients of late: An egg, sambar, roti or rice, vegetable curries and dry fruits and fruits as snacks.

“The condition of several patients have been deteriorating at night,” Dr. Nagarjuna told #KhabarLive on a night shift on the day he and his wife were supposed to have left for their honeymoon.

While two PPEs are provided for doctors on dayshift, only one is provided to doctors at night. As a consequence, doctors on the night-shift eat either at the beginning or end of the shift as they are not allowed to remove their PPE during breaks.

At night, nurses go on rounds every 30-minutes, while doctors do theirs every two hours as Covid-19 patients can suddenly develop serious problems.

“There were several nights when we have had to shift the patients into an ICU,” Dr. Nagarjuna said. “Just 60 percent of such cases respond to medication and recover. It is a tough call to make at night.”

At night, the worries of most healthcare professionals increase as some patients complain of chest pain due to anxiety, leaving doctors to deduce if the cause is psychological or physiological. 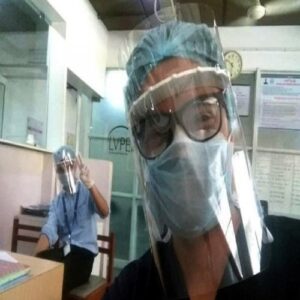 “We tell them it is alright and that they will leave the hospital soon. But even we do not know when we will get to leave this place. Perhaps not anytime soon,” said the doctor.

Dr. Nagarjuna’s wedding is now scheduled for August, but he isn’t sure if the pandemic will have passed

“I think my fiancée and I will have to wait till the end of this year,” he said stoically. “I became a doctor for the adrenaline rush and because I wanted to do good for people. That part of me has not changed,” he said. #KhabarLive

#HappyRepublicDay2019: Why This ‘Seasonal Patriotism’ On National Festivals?

Now, Telangana Minister KTR Will Be Made Deputy CM After Ugadi...

A History Behind ‘Street Names’ Of Hyderabad