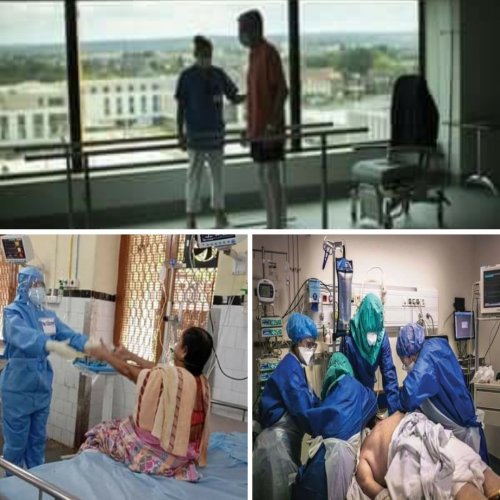 Patients who battle severe after-effects of the viral infection are turning to local doctors or YouTube videos for help in the absence of post-discharge rehabilitation protocols.

Telangana Institute of Medical Sciences (TIMS) is one of the civic hospitals in Hyderabad that has recently started offering physiotherapy to patients before discharge.

It has been two months since Abdul Mohiuddin, a professor In Osmania University, was discharged from the hospital after a long battle with Covid-19, but he still feels the lingering after-effects of the viral infection. The severe lung damage caused by SARS CoV-2 has left the 45-year-old prone to exertional dyspnea, which makes him constantly feel like he’s running out of breath.

Mohiuddin, who has been closely watching his recovery curve, says that climbing the stairs to reach the third floor in the University where he works is now a tedious task. Even reading aloud a paragraph at once can leave him gasping for air. And this is an improvement from last month, when he could not even find the strength to hold a cup of tea.

Mohiuddin got back home on May 4 after spending 25 days in three different hospitals, including some days in ICU at a private hospital, where he got a bill running into lakhs. When he finally left the last hospital, he was just asked to remain in home quarantine for the next 14 days. There was no rehabilitation plan or a follow-up schedule drawn out for him.

“My chest x-ray still had a pneumonic infiltration but doctors said that it should disappear in six weeks,” says Mohiuddin to #KhabarLive. At home, he began to experience severe bouts of weakness, fatigue and shortness of breath. With no guidance from the doctors who treated him, Mohiuddin turned to his other doctor friends for tips on pulmonary exercises that he could do at home. Along with a few breathing techniques, he started using an incentive spirometer, a device that helps increase lung capacity and helps patients with deep breathing.

ALSO READ:  Janata Curfew 'Clapping Together' Convey Message - 'We Are Together In Battle Against Coronavirus'

“The little bit of rehab routine that I followed at home played a huge role in my recovery,” he says.

Months after the pandemic began, it’s clear that Covid-19 wreaks havoc in the lungs of moderate to critically ill patients as they grapple with weakness, breathlessness and fatigue for weeks, if not months. It’s like the lungs forget their primary function. Hence, say experts, pulmonary rehabilitation, aimed at reminding the lungs to do what they do—inhale, exhale and supply a good amount of oxygen to the body through a set of individualised but monitored exercises—is critical to the recovery process. But hospitals across the country, still overwhelmed by the sheer volume of Covid-19 patients, have paid little to no attention to this aspect.

In Hyderabad, one of the country’s worst-hit cities, civic hospitals have just begun waking up to the need to offer physiotherapy to patients while they are in the hospital. A post-discharge rehab protocol is still not in place.

Even in private hospitals, it’s a rare service that comes with an additional cost burden included in Covid treatment packages. “In the absence of a rehab programme, patients remain recumbent for a longer period, have reduced productivity and their overall recovery is slowed down drastically,” said Dr Swati Reddy, head of advanced physiotherapy department at Apollo Hospitals in Hyderabad.

Without proper instructions, many patients are turning to local doctors, or even Google and YouTube, to help them get through the damage left by the disease.

A 32-year-old businessman from Old City area in Hyderabad, who is into retail business, was discharged on June 27 after a 23-day long hospital stay. This included a few days in the ICU, where he was put on the Bilevel Positive Airway Pressure (BiPAP) machine, that offers non-invasive ventilation.

“I still have cramps, shivering and unexplainable weakness. Moving from the bed to pick up the cell phone lying on the side table is exhausting,” he says. Though he’s a candidate for rehabilitation, he hasn’t had the time to enrol into a programme as his 58-year-old father, who also caught the infection, was shifted to the High Dependency Unit (HDU) of Gandhi Hospital last week.

Doctors says, didn’t share any information on rehab exercises. His father’s treating by physician Dr Ghulam Samdani is still trying to ascertain whether the 58-year-old has developed lung fibrosis—a permanent condition wherein the lung tissue is severely damaged—or has pulmonary infiltrates that may disappear gradually. The doctor has seen five Covid-19 patients progressing to lung fibrosis over the past three months. This patient, said Dr Samdani to #KhabarLive, will need chest rehab but even the limited facilities are not active right now due to the ongoing staff shortage.

Renowned pulmonologist Dr Sundeep Sunder, who is also the vice-president of the Indian Chest Society, said that doctors across the country have started noticing scarring of the lungs in Covid-19 patients. “The prognosis of patients with such lung scars is worse. Their quality of life is badly affected due to difficulty in breathing,” said Dr Sunder, adding that a small percentage of patients were reported to have pulmonary fibrosis during the first SARS outbreak as well.

The component of fatigue associated with Covid-19 is not like other viral ailments, as even those with mild disease suffer from long-lasting body aches and crushing weakness. The oxygen imbalance due to compromised lung function is mainly to be blamed for this exhaustion.

Dr Hemant Kumar, TIMS Hospital, said that the oxygen saturation fluctuates rapidly to dangerous levels. “We have seen patients who are lying down on the bed with oxygen saturation level at 94% and the moment they sit upright, the saturation dips below 90%,” he said.

Incidentally, TIMS Hospital has seen biggest share of serious patients, but is yet to set up a structured system for follow-ups.

The civic-run Osmania Hospital in Hyderabad, a medical college that was converted into a dedicated Covid-19 facility, has recently deployed its post-graduate physiotherapy students in Covid wards to initiate rehabilitation for patients set for discharge. The hospital is now in the process of developing tele-rehab facilities for patients who have what they call ‘post Covid sequelae’, or lingering effects of the disease.

The primary challenge is that few hospitals in the country have well-developed pulmonary rehabilitation facilities, a demanding speciality that requires a team of good pulmonologists, physiotherapists, trained nursing staff, nutritionists and psychologists.

“It has been a grossly underdeveloped field since the pre-Covid times. If you pick 100 hospitals in the country, less than five will have a good pulmonary rehab centre,” said Dr Sunder, adding that he hopes that the pandemic pushes hospitals to develop this speciality, especially in high-burden states like Telangana. At Covid Care Centres, where mild patients are admitted, mass yoga programmes with emphasis on breathing exercises have recently been initiated.

But, according to experts, an ideal rehab programme should consist of a wide range of exercises such as chest manipulation techniques, inspiratory muscle stimulation, thoracic expansion exercises, diaphragmatic and segmental breathing, positioning for proper lung ventilation and hourly use of an incentive spirometer among other things.

Nearly 15% Covid-19 patients fall into the moderate to severe category and the role of rehabilitation in such patients is much more. The duration can be anywhere between two to six weeks depending on the symptoms and severity of the disease.

In the absence of structured protocol, the people who suffer most are those like this 38-year-old engineer who had to fall back on YouTube after he was discharged from a Covid Care Centre in King Kothi of Hyderabad, without any clear instructions on how to cope with the after-effects. “After I could no longer deal with the nagging body pain and weakness, I finally started following YouTube videos for rehabilitation,” he said. #KhabarLive #hydnews