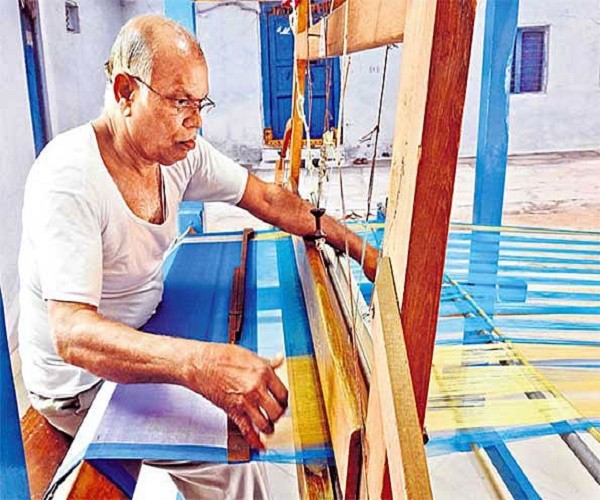 Sircilla, headquarters of the newly-formed Rajanna Sircilla district in Telangana, was a peaceful handloom centre in the decades before the 1970s with a happy, hardworking, skilled and contented weaver community. Every family in the town was a handloom cottage industry. All the members, right from 8 years old to 80 years lived and worked together under one roof to make high quality, highly variegated custom-made handloom cloth.

Throughout the year, the demand for cloth matched the supply providing each family with enough income for all its familial needs. There were neither poor nor rich. Income inequalities were negligible. No wonder all these decades there were no suicides that became identified with the town subsequently.

During the 1970s, the boom in powerlooms in Mumbai and Surat attracted some people from Sircilla. They went there as workers. The work on powerlooms was easy and returns were good. After learning the ropes of working on powerlooms, they returned and started powerlooms at Sircilla.

The period of this change also coincided with the introduction of polyester. As powerlooms were easy to operate and produced cloth much faster than it was possible with handlooms, there was a demographic shift of handloom weavers to powerlooms mainly because their handloom cloth could not compete with the powerloom produced cloth, both in supply and cost.

Shift to Powerlooms
However, powerloom cloth required huge capital that brought money lending enterprenerers from outside who not only started their powerloom centres but also encouraged the handloom weavers to shift to powerlooms by lending them loans to buy. This is how the apple cart of serene and halcyon conditions of the laid-back self-sufficient Sircilla handloom industry was usurped by powerlooms.

ALSO READ:  Will Telangana Selects Congress Over TRS In Elections?

This shift from handloom to powerloom metamorphosised the single-tier homogenous weaver community with each family into a three-tier model of Master Weavers, Assamis (powerloom owners) and workers. The Master Weavers brought yarn from outside and changed them into beams, which were outsourced to Assamis for cloth production with the help of workers. Another major tectonic change was that the self-sufficient handloom sector was sucked into national markets, both for inputs and for marketing the cloth, and thus was entrapped by it.

Thus, only a handful of Master Weavers who had capital and who could deal with outsiders with the knowledge of national markets reduced the thousands of powerloom owners and worker families into total dependency. Concurrent with change was the irrevocable dependency of the entire Sircilla industry on national textile players, exposing them to very high competition.

Impact on Weavers
The consequences of this shift to powerloom were both good and bad; good for a handful of Master Weavers who had enough financial resources to get stock produced during off-season and sell it during the season with highly volatile profit margins ranging from double the cost to below the cost. The negative impact of this change was that a large number of Assamis and workers — independent at one point — became dependent on Master Weavers who paid only subsistence rates for production of cloth to Assamis and wages to the workers.

Another major fallout was that Sircilla handloom workers, who were highly skilled, lost their touch with handloom weaving skill and thus failed to transform the town into a brand name like Uppada, Pochampally, Venkatagiri and Kanchi. This unequal sharing of the returns is visible in the high-rise buildings of a few successful entrepreneurs coexisting with thousands of poor workers whose inflation-adjusted wages have been negative over the decades.

Whenever there was a glut in the national textile industry or during offseasons, the Master Weavers stopped or reduced production completely decimating the incomes of the thousands of families of small-time powerloom owners and the textile workers.

Pyramid Shape
These pathetic conditions remained unresolved for decades with previous governments only providing palliatives to help the bereaved families and handing out doles in cash and kind at intervals. This was mainly because there was no concerted attempt to understand the situation by the leaders and authorities so much so that in most of the press notes, they referred to the town as handloom centre whereas its problems spring from being a powerloom centre.

At present, the economic map of the town is a like pyramid shape reflecting income distribution with Master Weavers at the top, small-time powerlooom producers in the middle and the 20,000-plus workers at the bottom. The graphic depicting sharing of work looks like an inverted pyramid with the workers working in dingy rooms with low ceiling, high noise and dense pollution at the top and the others coming next in the pyramid, playing havoc with the health of the majority of the populace of the town.

Striking Problem at Root
There’s hope, however, for things to gradually improve. Direct involvement of Telangana Industries Minister and MLA KT Rama Rao could succeed to strike at the root of the problem and solve it with the twin policies of transforming workers into producers and by providing a consistent ready market for the cloth through huge orders for the Bathukamma sarees. This is creative governance without any lofty talk of ‘less government and more governance’.

Now, Sircilla has become a model to showcase how a concerned and sympathetic government can transform exploitative business systems into systems that provide concerted creation of wealth and its equitable distribution obviating the need for extreme ideologies that racked the town for long.

Sircilla now deserves its name which means ‘Town of Riches’. It is hoped that such creative handling of the production units will go a long way in solving the twin problems of unemployment and unequal income distribution, the latter being the root cause of a majority of social aberrations. #KhabarLive

Corruption And Bribery Go On Unabated In Govt Hospitals In Hyderabad