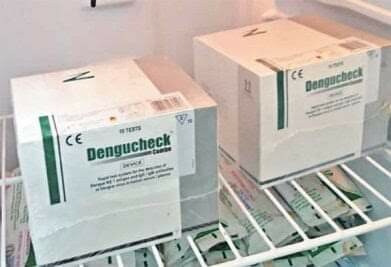 Taking the fight against viral fevers to the grassroots, the Greater Hyderabad Municipal Corporation’s immensely popular Telangana government-run ‘Basthi Dawakhanas’ are being equipped with dengue and malaria ‘rapid testing kits’ to get the test results in double quick time and offer treatment without delay.

The move comes at a time when many private diagnostic centres in the city are not equipped with these rapid test kits and the public is forced to wait for days together to confirm whether they have dengue. Using the rapid test kits, the staff at Basthi Dawakhanas collect blood samples for testing and get the results in about 15 minutes.

This is coming in very handy for the staff at the Basthi Dawakhanas. Based on the test results, they are offering the treatment. Though these kits are 94 per cent accurate, a second opinion is also being sought from Telangana Diagnostics in a few suspected cases, a senior official said.

The idea behind launching the rapid tests kits was to get the results early and also arrest the flow of patients to private hospitals.

Earlier, samples were collected at the Basthi Dawakhanas and sent to Telangana Diagnostics. As it takes 24 hours and more for the results to come, patients were going to private hospitals. The rapid test kits are expected to change this situation for the good.

ALSO READ:  Why The BJP' Sudden Hug Has Become Too Tight For The Regional Parties?

The distribution of these kits was launched 10 days ago and each Basthi Dawakhana is being supplied with five boxes currently. Each box contains 10 strips and efforts are being made to supply 12 boxes to each centre.

There is one more side to the kits. While these tests are conducted for free at Basthi Dawakhanas, in a few private diagnostic centres, Rs.1,500 to Rs.2,000 is charged per test.

At the same time, the sample collection timings have been extended following heavy rush at the Dawakhanas. Earlier, samples were collected from 10 am to 12 noon, while it is from 8 am to 12 noon now.

On the other hand, in tune with Municipal Administration and Urban Development Minister KT Rama Rao’s plans of setting up more Basthi Dawakhanas in the city, 10 more centres are being launched this week. #KhabarLive