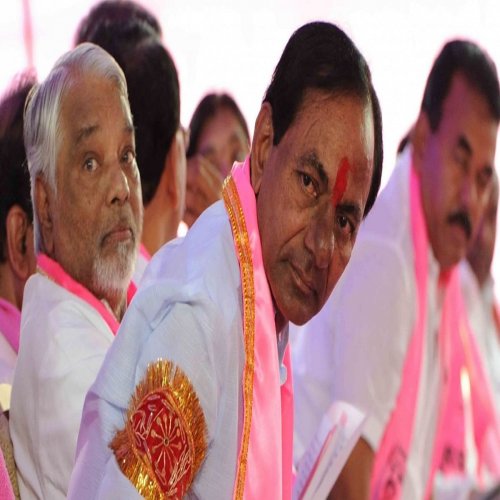 Telangana CM K Chandrasekhar Rao has encouraged defection of several MLAs from Congress and the TDP into his TRS with a view to weaken the opposition parties and consolidate the ruling party.

But many of these defectors, particularly those who had come from the Congress party, have become a big headache for the chief minister with their actions that project the Telangana government in the bad light.

A video of Nagender abusing the bank officials over the auctioning of a private property belonging to ex-MP Kavuri Sambasiva Rao went viral in the social media, landing the KCR government in an embarrassing situation.

While the bank sold the property to another bidder in open auction, Nagender who had an eye on the land tried to stall the sale stating that it was the government land. The bank officials had lodged a complaint with the police against Nagender.

Similarly, another TRS MLA Arikapudi Gandhi of Serilingampally, who had defected from the TDP in the past, got into news for wrong reasons.

He allegedly threatened revenue officials with dire consequences for stopping an encroachment of a lake in Kukatpally area.

On Tuesday, Pinapaka MLA Rega Kantha Rao, who had won on the Congress ticket but jumped into the TRS later, allegedly occupied the Congress party office building in Kothagudem and painted it with pink. The building, which was originally called Indira Bhavan, was renamed as Telangana Bhavan.

Several such defector MLAs of the TRS are creating troubles for the officials as well as the opposition parties, bringing a bad name to the KCR government.

It is learnt the chief minister has taken these issues seriously and decided to warn such leaders so that they would not repeat such acts. #KhabarLive #hydnews