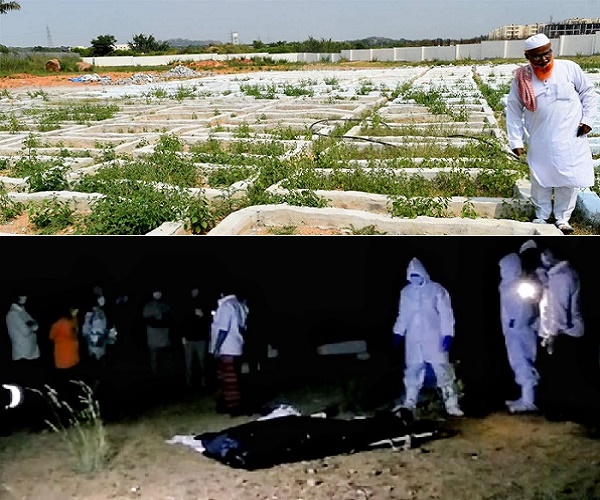 A combination of stigma and fear has meant that this secluded graveyard, devoid of even a proper boundary wall, has ended up being the final resting place of a number of Covid-19 victims in Hyderabad and other parts of Telangana.

The 50-acre kabristan, part of the Telangana Waqf Board land at the Dargah Faqeer Mullah in Balapur, had already been functioning as a burial site since October 2018, but in the two years, only three graves had come up in the area.

It was All India Majlis-e-Ittehad-ul-Muslimeen (AIMIM) president and Hyderabad MP, Asaduddin Owaisi, who stepped in and got the burial site reserved for COVID patients after reports that other local graveyards weren’t allowing the entry of victims.

“I was upset. I would receive so many calls ever since the lockdown began that people were being denied a peaceful burial because it was a COVID death and, hence, at an early stage itself, I asked some of our workers to use the vacant land we had for this purpose,” Owaisi told #KhabarLive.

Around 10 acres of the kabristan has now been earmarked for Covid-19 patients. It got its first body on 25 March, three days after the state had announced a complete lockdown.

Since then 33 bodies of coronavirus patients have been buried here. The state has reported 105 deaths so far.

or Ahmed Saji, who monitors work at the Faqeer Mullah Kabristan, dignity in death, he said, is paramount. “We felt everybody deserves a funeral with dignity. At the end, we all have to die, virus or no virus,” he told #KhabarLive.

While most Muslims are buried here, Saji says the kabristan is open to Covid-19 victims of all faiths.

A trusted aide of Asaduddin, Saji says they zeroed in on the kabristan as other burial grounds refused to let in Covid-19 patients. “People residing in houses close to these graveyards would also object and at times block the gate,” he said.

There is so much fear, Saji says, that even at the Faqeer Mullah Kabristan, most of the bodies are buried at night to ensure there is opposition from locals living nearby.

As for the staff, Saji says there is no such fear. “Har insaan ko maut ka maza chakhna hai (Everybody has to die someday),” he said.

For his aide, Habib, who likes reading the namaz, doing this for unclaimed bodies is his way of bidding them farewell with dignity. “Anyway, the lockdown rules don’t permit too many people to attend the funeral but we have particularly noticed how families and neighbors are afraid to accompany COVID bodies and hence I feel this is my way of doing something for them,” Habib told #KhabarLive.

When #KhabarLive had visited the graveyard Wednesday, it was Habib who helped move the bodies of two women, showing more bravery and compassion than even the ambulance staff.

But even this burial ground hasn’t been without its troubles.

Saji says that in the early days, they had employed a Joseph Cybril Bamford (JCB) earthmover to dig the graves but the driver fled once he realized that the bodies were that of Covid-19 patients.

“The driver saw a body packed in a black kit, which indicates it’s a COVID body. He turned his machine around and escaped,” Saji said. That meant workers had to dig the 8-feet deep graves themselves. But now for the past three-four days, they’ve managed the services of another JCB machine.

Siraj Ud Din, 37, another staff worker, who resides in a makeshift house near the kabristan, says staff here have to be alert all the time. “One has to be alert as we get a call at 12:30 am that a body is coming and then it arrives by 2 am,” he said. “So the entire night goes like that and then we sleep in the morning.

“We have to even counsel people to not be this afraid,” he added.

Saji told #KhabarLive that nearly Rs 6,000 is spent on every funeral, with the money coming from the Salar E Millat Education Trust, set up by AIMIM MLA Akbaruddin Owaisi, Assaddudin Owaisi’s brother.

“We have a committee and we have some funds that the MP has provided for this, so we use that in circumstances where no family member is around,” he added.

The Owaisi brothers evoke blind devotion here as all the caretakers and those monitoring the kabristan are members of the AIMIM. “If our MP asks us to do something, we follow. He always wants the best for his people,” Saji said.

The staff says that each death here brings with it deep pain, especially as most are buried without their families.

Habib Asif, another member of the team at the kabristan, told #KhabarLive that the youngest victim was just three months old who was buried, recently.

“Even we were really upset when we saw such a small body being buried and sadly not a single family member was around as the parents had been quarantined, and no other relatives wanted to come because there is a stigma attached to the disease,” Asif said.
“Even the ambulance driver and staff were heartbroken. We read the namaz together, that’s the least we could do.”

The ambulance driver, Rahim, who got her body, told #KhabarLive: “The parents were informed but as disturbed as they were, we could not allow them to come for the funeral.” He added that the grandfather was keen to come but the people in their society didn’t let him due to fear of infection.

The oldest victim so far was a 75-year-old, who was the first COVID patient to be brought to the kabristan.

For the families, the dignified burial is small consolation amid the grief over the deaths.

“We went to four burial grounds and even gave up and went to a crematorium after my father’s brother died of COVID but none of them allowed us in,” said a resident of Karimnagar who was eventually guided to the kabristan in Balapur by the staff at Owaisi’s office.

A 33-year-old woman, whose extended family member was buried at the kabristan, told #KhabarLive: “Humein teen jagah jaane se roka. Mera pati bata rahe the Sirf Ek Yahi kabristan tha Jahan inkar nahi kya (We were stopped at three places. My husband told me that this is the only place where they didn’t say no).”

The stigma against Covid-19 patients continues despite the government orders.
In the first week of April, officials of the municipal administration and urban development (MA&UD) had asked district collectors and municipal commissioners across Telangana to ensure proper preparations for burial and cremation grounds for Covid-19 bodies.

The government had also instructed the management of burial grounds to demarcate space for Covid-19 patients, provide a separate entry, and treat the trench with sodium hypochlorite before the body arrives.

The Telangana Waqf Board is scheduled to meet on 6 June (Saturday) to discuss the issue of graveyards and decide what action can be taken against caretakers refusing burials for COVID bodies. #KhabarLive #hydnews

Despite KCR’s ‘Regular Daily Water’ Promise – ‘They Still Struggle For...

Every Sunday ‘Abids Book Bazaar’ On Footpath Is A ‘Big Hit’...