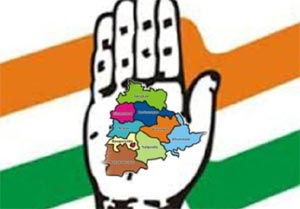 It is almost like a foregone conclusion-The Congress party cannot nurture too many hopes of coming to power in Telangana State. As things stand, they might have to rest content as the major opposition party in the State.

All the hype that was generated when A Revanth Reddy joined Congress seems to have dissipated. A close look at the happenings in the party indicates that slowly the TPCC is busy in creating a new group of Reddy leaders sidelining the group that was active and close to Late YS Rajasekhar Reddy.

In the process the Congress appears to be giving less importance to the BCs who form a strong vote-bank in Telangana. After Rahul Gandhi took over as AICC President, TPCC president N Uttam Kumar Reddy made some quick moves and succeeded in winning the confidence of the party boss.

But the question is, has he succeeded in bringing a turnaround in the political fortunes of the TPCC. To add to the recent adverse developments, a major setback has come on Friday with regard to Kaleshwaram project in the Supreme Court, which dismissed a writ petition filed by Md Hayatuddin challenging the environmental clearances accorded to the project.

The petitioner’s contention was that the tunnel and pump house works were carried out without any environment clearance. He also questioned the clearances given at a later date. His opinion suffered a jolt when the court questioned the delay in approaching them.

In fact, the redesigned Kaleshwaram project is as important to Telangana as Polavaram project is to Andhra Pradesh. This project envisioned by Late Rajasekhara Reddy and was used as a weapon to taunt the TDP president and his bête-noire N Chandrababu Naidu by wondering why TDP never dreamt of such a massive project.

The project envisages drawing water from Pranahita barrage to irrigate 2.5 lakh acres of land in Adilabad district. However, with the intention of bringing more areas of Telangana under irrigation, the KCR government got the project redesigned and named it as Kaleshwaram after the famous temple in Karimnagar district.

Kaleshwaram project, with three barrages Medigadda, Annaram and Sundilla will lift 160 tmc ft of water. Apart from irrigating 18 lakh acres of land, it will supply 30 tmc ft of water to Hyderabad for drinking purposes, another ten tmc ft for the villages en-route, and 16 tmc ft for industrial needs. The project will require 4500 MW of power for lifting water at different stages.

The way forward for the massive project was paved only after the TRS government reached an understanding with neighbouring Maharashtra to resolve inter-state disputes and minimise the submergence of villages. But this developed into a major political controversy as the Congress party, BJP and others opposed the redesigning of the project and land acquisition. It is a different thing altogether that their dharnas were effectively thwarted by the government.

The Congress approached Green Tribunal and took resort to other legal measures to put spokes in the project works. It was hoping that this would help them to win over the farmers and thereby gain political advantage. But the judgement of the apex court just two days ahead of the proposed bus yatra has come as a major setback to it.

ALSO READ:  New Mantra, Vedanomics Is All We Need For 'Achhe Din' To Modiji

That apart, the proposed yatra seems to have ignited greater dissent within the party. The TPCC chief who wanted to show to the TRS that the Congress was on a comeback trail and several leaders were showing interest in joining the Congress, should sit back and take stock of the ground situation and whether the party had made any tangible gains in the past three years. There was strong opposition to the entry of Revanth Reddy. However, the fire was doused by the intervention of central leadership.

But with the latest decision to admit Nagam Janardan Reddy has resulted in internal squabbles. DK Aruna who is considered to be a heavyweight in Gadwal region, is upset over the development. Analysts say that Aruna, who has been disillusioned for long, is staunchly opposed to Nagam’s entry. The general opinion is that if that happens, then there is every possibility that she may quit Congress and join TRS.

It is ditto with MLC Damodar Reddy, who has been a Nagam adversary from 1999. Damodar had unsuccessfully contested against Nagam as Congress Party candidate when Janardhan Reddy was in the TDP during 1999, 2004 and 2009 Assembly polls. Damodar says that that the move to admit Nagam would do more harm than good to the party at the grassroots level.

The party leadership also did not deem it necessary to consult the local leaders he alleges. Nagam, according to him, has a dominating nature and that was not acceptable to them.Similarly, there is a strong opposition to the entry of TDP leader Vanteru Pratap Reddy of Medak. Interestingly, Damodar Reddy preferred to express his dissent on a day when AICC state in-charge RC Khuntia was in Hyderabad and was making efforts to resolve the differences among party seniors.

It is also interesting to note that Uttam has successfully side-lined strong leaders like Komatireddy Venkat Reddy in Nalgonda district who had enjoyed tremendous clout during the YSR regime. When the AICC agreed for a bus yatra and padayatras, Uttam ensured that Komatireddy was not actively involved. Earlier when Komatireddy wanted to take out a padayatra he was not permitted.

Uttam who has been a fighter pilot wants to organise the padayatra and bus yatras in army style. Other seniors like J Geeta Reddy, who was considered to be influential during YSR time, are also up in arms over the TPCC president’s style of functioning.

Above all, the way BCs have been ignored in the party, political analysts aver that it would help the TRS. Another self-goal by Congress is in ignoring ‘settlers’ staying in Greater Hyderabad limits. The TRS had succeeded in winning them over during the GHMC elections. This could dent the prospects of Congress in over 15 seats.

Ignoring BCs in the party and seniors walking out of the party indicates that the TPCC has become a wrecked ship that cannot set sail anytime in the near future. #KhabarLive