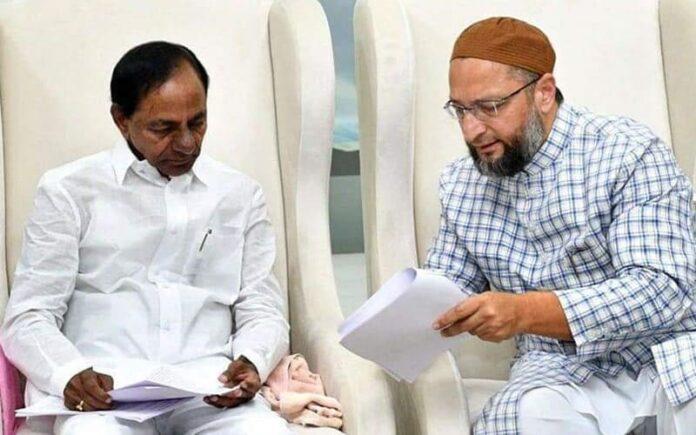 The must awaited favour to minorities in terms of opposing NPR and CAA in Telangana by ruling TRS government is visible not so impressive, as the pressure tactics maintained by ally All India Majlis Ittehadul Muslimeen (AIMIM).

Telangana Chief Minister K Chandrasekhar Rao had already announced that the government will pass a resolution against Citizenship Amendment Act (CAA) in the Assembly as it is ‘unconstitutional’, while the government is yet to take a call on the proposed National Register of Citizens. However, it has strangely given assent to conduct National Population Register (NPR) exercise in the state, which is widely perceived as the precursor to NRC.

A letter dated 13, February issued by the Director of Census Operations, K Ilambarithi established that as per the Ministry of Home Affairs, the process of updating the NPR would take place simultaneously while conducting Housing Listing and Housing Census 2021, which would begin from April 1. But this move by the government has caused anger and resentment among Muslims in the state.

Clerics in Jama Masjid in Darul Shifa held prayers and announced that they would boycott NPR. In fact, even AIMIM, a friendly party with the TRS, has spoken out against the move. However, many believe that the clerics hold no great sway over the people in Hyderabad, but what could really spell trouble for KCR- both in Hyderabad and outside- is opposition from political parties like AIMIM.

While earlier NPR exercises didn’t include the controversial questions of date of birth and place of birth of an individual’s parents, the current form does. And this has given credibility to the apprehensions of the anti-CAA protestors that the NPR will be a precursor to the NRC. With KCR’s decision to implement NPR in the state, some Muslim leaders have called it a betrayal by the TRS, which postures as a secular party.

AIMIM chief Asaduddin Owaisi recently said, “As the state of Kerala has put a stay on NPR, we request and hope that the CM of Telangana would also put a stay to NPR, because NPR has no relation with census or socio-welfare schemes. It is purely an exercise to do NRC in the future. Though we welcome the decision against CAA, we urge and request him (KCR) to also put a stay on NPR.” The Kerala government has decided not to update NPR. Similarly, the Andhra Pradesh government said that they would conduct NPR along with census, however, individuals can choose not to give details for the NPR exercise. However, the TRS government has not offered any clarity over NPR and has allowed the exercise to be carried out.

Majlis Bachao Tehreek chief Amjed Ullah Khan said, “Since the day the protests began, I have been maintaining that TRS would betray the minorities. TRS always remained an ally of the BJP. Their vote against Citizenship (Amendment) Bill (now Act) was just to win the municipal elections. This was the only time they differed with the BJP.”

Despite pressure from the Muslim community and allies, the government instead of allaying fears by giving a clarity on the issue, Deputy Chief Minister Mahmood Ali is claiming they wouldn’t allow NRC and the census has no relation to NPR. “To reinstate faith of the Muslims in the TRS, the CM has entrusted Deputy CM Mahmood Ali to lie that they have only allowed census to be carried out, which is false. The documents clearly state that along with the census NPR would be carried out,” Amjed said.

The TRS is deliberately confusing the people with their stands, and discreetly allowing the NRC exercise in the state, he said, adding that the onus is on the government to clarify their stand on the NRC and NPR, and provide relief to anxious Muslims.

Shiba Minai, another activist said, “The government has taken a stand against CAA, but it is not CAA which is the problem but NRC. Why is the government silent on it? And why are they allowing NPR?”

“It is a political gimmick not to anger the Muslim community and posture as a secular party. If the TRS is true to their word of being a secular party, they should oppose NRC and stop the NPR exercise too,” she said. #KhabarLive

Can ‘Ayushman Bharat’ Or ‘Arogyasri’ Succeed Without Regulating Private Hospitals?

The Shadow Of The ‘Sarkari Pen’ Looms Over Lives Of Common...