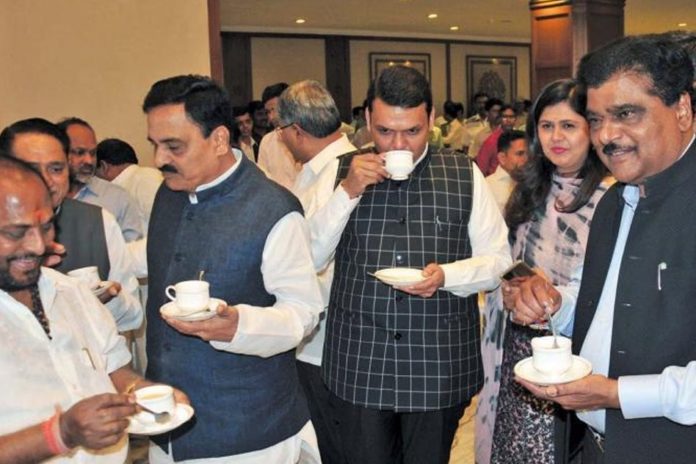 The Mumbai unit of Congress alleged a major “Tea Scam” on Wednesday, claiming that 18,500 cups of the hot beverage are being served daily on an average at Maharashtra Chief Minister’s Office (CMO).

While showing RTI documents, Mumbai Congress President Sanjay Nirupam told KhabarLive that there has been a sudden and huge increase in tea expenses of CMO in the last three years.

He also questioned the staggering increase of 577% in tea consumption. Moreover, Nirupam sarcastically pointed the kind of tea consumed by the State Chief Minister, Devendra Fadnavis. He said that only yellow tea, green tea and so on are heard of, but the CM and CMO seem to be indulged in some kind of “highly expensive ‘golden’ tea’ that mounted up such a huge bill”.

ALSO READ:  Wildlife Is In Danger At 'University of Hyderabad' Campus As Authorities 'Caught On Horns' Of Dilemma

In contrast to this, he said, farmers are dying daily in Maharashtra, but what is surprising is that the CMO seems to be involved in an unprecedented expense on “serving tea worth crores of rupees”.

“On one hand, the Prime Minister takes great pride in saying that he was a ‘Chaiwala’. On the other hand, Fadnavis has clearly taken this a bit too far with the massive and unnecessary expense incurred on serving tea in his office. Both the PM and the Maharashtra CM are taking the country for a ride in the name of chai,” he added.

In a reply to a question if it’s correct to serve tea to more than 18,000 people daily, Nirupam asserted that “those Mantralaya rats must be drinking it all up!”

By saying so, he indirectly pinpointed the rat scam highlighted by the Bharatiya Janata Party’s Ex-Minister Eknath Khadse, who claimed that around 3,19,400 rats were terminated from Mantralaya in just one week.

In a clarification, the state government later said that he was referring to 3,19,400 doses of rat poison which were used to kill the rodents in Mantralaya.

Nirupam demanded a proper investigation and strict action against the defaulter as tea expenses are being paid from the pocket of honest taxpayers.

Responding to the Congress leader’s allegations, the CMO in a statement said, “The conclusions drawn by Nirupam are wrong. The expenditure he referred to as being on tea and snacks is, in reality, the expenditure on the overall hospitality.” #KhabarLive

‘Get Fashion Upgrade And Clean Wardrobe, All At The Same Time’

End of An Era, Beginning Of Another To RCom?