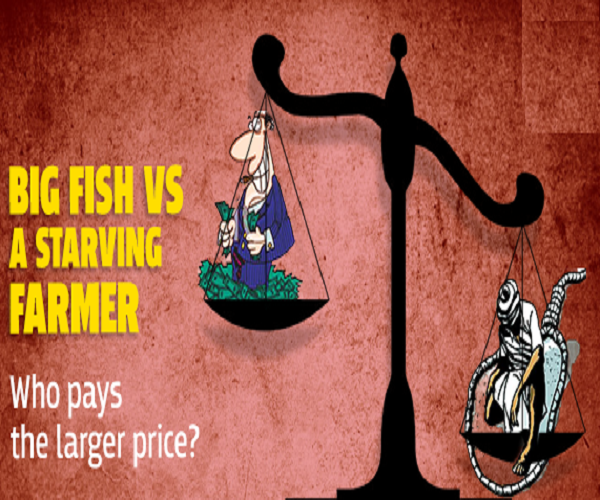 Why is Rs 1.84 lakh crore a “frightening challenge” for banks, but Rs 10.17 lakh crores not? The great farm loan waiver debate is back. The Congress kicked it off this time with the announcement of waivers in the newly-elected governments of Chhattisgarh, Madhya Pradesh, and Rajasthan.

This was followed up by similar announcements from BJP-ruled Gujarat and Assam. Rahul Gandhi even went onto to demand a nation-wide farm loan waiver from Prime Minister Narendra Modi.

As if on cue, India’s bankers and economists claim to be alarmed.

United Bank of India’s MD, Ashok Kumar Pradhan, said, “It is a deadly poison. It’s a wrong way of addressing the real issue.”

“It is not good for the country’s credit culture,” said Mrutyunjay Mahapatra, managing director at Syndicate Bank.

“Clearly, (this is) a frightening challenge for Indian banks!” said Soumya Kanti Ghosh, SBI group’s chief economic adviser, reacting to the information that the combined waiver amount may be Rs 60,000-70,000 crore.

The government’s think-tank, the NITI Aayog, pointed out that farm loan waivers only benefit 10-15% of all farmers, as the rest do not have access to institutional loans.

Following this, the Assam government announced a Rs 600 crore waiver in the state. Gujarat also followed suit with a Rs 650 crore waiver of farm electricity bills. Both states are BJP-ruled.

On the surface, this is a significant chunk of change. For instance, it easily dwarfs what the Congress has alleged is the value of the supposed Rafale scam (Rs 58,000 crore).

So it is important that we examine the concerns that have been expressed about these waivers.

To summarise, the concerns are:

No? Let me help you.

NPA stands for “non-performing asset”. It’s a bit of jargon in the banking industry to indicate that someone took a loan and did not pay it back… er… will never pay it back.

Now, this is really bad, isn’t it? If someone took a loan, they must repay it. If they did not repay it, the bank must seize whatever collateral was used for the loan. Because, otherwise, people will borrow recklessly, and that’s not good for the credit culture.

So loan repayment must be strictly enforced. But is it? Unless you’ve been living under a rock, you must have heard of the huge “NPA problem” that all our banks are saddled with. Essentially, it means companies have borrowed huge sums of money but not repaid them.

Now, instead of seizing collateral, what have banks done? They engage in questionable “restructuring” of the loan – in other words, extending the repayment period of the loan, even when nothing has yet been paid back – so that they do not have to seize the assets of the borrower.

There is also some evidence to show they may engage in a practice called ‘evergreening’ – a practice whereby they give even more loans to the companies that have not paid back previous loans. The logic is that they then may earn enough revenue to get out of trouble and start repaying their loans.

After one or two cycles of restructuring and evergreening, eventually the bank realises that the loan will never be repaid. In other words, it is a “non-performing asset,” and will have to be written off. No assets are seized, except maybe worthless plots of land or empty buildings – if at all. In banking parlance, it is said that the lending bank “got a haircut.”

Do the people who have taken such loans pay a penalty? Are they blacklisted? Are they termed defaulters who can never again get credit (because, you know, farmers who have defaulted on their loans can never get loans again)?

Do you know how much industrialists owe banks that they will never pay back? A whopping Rs 10.17 lakh crores for the quarter ended May 2018.

Now, let me remind you again the total amount of all the farm loan waivers: Rs 1.84 lakh crore, or less than 20% of the total NPAs.

So why does the Rs 1.84 lakh crore attract such swift condemnation and receive such public scrutiny but the Rs 10.17 lakh crore does not? Partly because the predominant view is that businessmen are seen as job-creators while farmers are seen as inefficient producers of food.

But it’s mostly because the folks who have taken those big amounts of money and not repaid them are what we could call politically influential or highly connected.

As of October 2017, these are the top companies which contribute to 25% of the total NPAs of banks:

With the advent of the Insolvency and Bankruptcy Code, some of these companies have started resolving their debt issues.

For the second list, here are the top eight companies with the most debt in India:

It is important to note that the second group does not necessarily equate to NPAs. However, they are still outstanding amounts that have not been paid to banks. The Ruias are common to both lists, and you can see how much of their total loan has already been declared irrecoverable.

Does it not seem that the non-repayment of 1 lakh crore by a single group might seriously hurt the credit culture of the country rather than the farm loan waivers? And forget 10-15% of the total number of companies – this list has only eight groups, and you can add up how much their cumulative debt is.

Perhaps, despite everything, we believe this country needs failed businessmen more than it needs failed farmers. #KhabarLive

Now, A ‘New Rule’ Will Change Your ‘Salary Reimbursements’ Under GST?

‘Tenant Farmers’ Left Out Of ‘Subsidy Scheme’ In Telangana