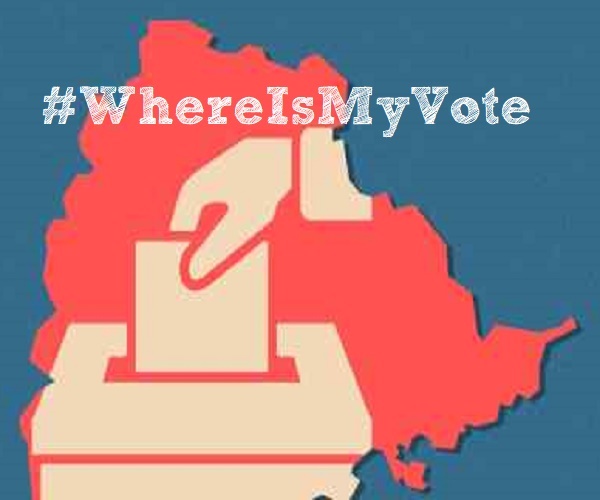 The trending hasgtag #WhereIsMyVote emerged as one of the most trending hashtags on Twitter as thousands in Telangana took to social media to vent their anger at finding their names missing in the voter’s list on election day.

The missing names and the ensuing anger and chaos outside polling booths across Hyderabad and other districts is not surprising though. #KhabarLive had highlighted that the Election Commission of India had deleted 30 lakh voter names in the state based on an opaque de-duplication software.

The algorithm, source-code or the maker of the software is unknown as the EC has not provided details.

Primary among the concerns raised to the Election Commission of India and Telangana’s Chief Electoral Officer (CEO) in October was the issue of nearly 30 lakh deleted voters from the state’s 2018 electoral roll.

In PILs submitted to the Hyderabad High Court in October and November, petitioners had also questioned the lack of transparency regarding the software employed to weed out duplicate voters. The CEO was also asked if due process was followed in reaching out to the voters whose names were struck off the rolls.

30 Lakh Voter Names Deleted
A comparison of voter data between 2014 and 2018 reveals a drastic drop in the number of electors by 29.87 lakh.

The Electoral Roll Data 2018, published by the EC, reveals Telangana’s voter population to be 2.53 crore. This marks a sharp decline from the 2014 data when the number of electors stood at 2.83 crore.

At a press conference in Hyderabad on 25 October, CEC OP Rawat had said that a revised electoral roll in October showed 2.73 crore voters in the state.

However, ordering spot verification of complaints made by political parties, Rawat had said that a second supplementary voter’s list will be published on 19 November. All those on the list will be eligible to vote in the state elections, he had said. The updated list, however, is not available on the Telangana EC website.

‘Latest Tech’ Used for Voter-Role Purification – What Latest Tech?
According to a report, CEC Rawat, during a visit to Telangana on 25 October, had justified the voter deletions saying that the EC had used the latest technology to purify the electoral rolls.

What is this latest technology? No one really knows.

Srinivas Kodali, a Hyderabad-based independent researcher, had filed a PIL in Hyderabad High Court urging the court to direct the EC to make the algorithm of the software public.

Speaking to #KhabarLive, Kodali said, “The EC has not made public the details of the developer, the software or the algorithm that it deployed in the purification process. The software was used to identify duplicates and delete voters based on the results thrown up by it.”

Describing it as an ‘artificial restriction on democracy’, Kodali said: “The source code and algorithm of the software are not in public domain, the software is known to produce large-scale false negatives and positives. Under these circumstances, the Election Commission’s trust in a black box to have free and fair elections is a restriction on transparency and in turn on democracy.”

Why Were These Names Deleted?
Telangana’s CEO Rajat Kumar had offered a number of explanations for the large-scale deletions. According to a report, Kumar, at a press conference, had attributed the drastic fall to mass migration of voters to Andhra Pradesh following the bifurcation of the state.

This explanation, however, does not pass muster because a large-scale migration of Telangana’s electoral population would have resulted in a commensurate increase in voters in Andhra Pradesh. A look at the electoral list of 2018 reveals that Andhra, too, reported a decline in voter population by 21.5 lakh.

The other explanations offered were de-duplication of voters in the electoral rolls as well as deaths of voters.

Rakesh Dubbudu, an RTI campaigner who runs Factly, a public information portal, questioned why such large-scale duplications and deletions have been found in the two states when there are no unique features to justify them.

“There has been an average voter increase between eight and twenty percent in other states but Telangana and Andhra are two unique states where it has gone down sharply.” said, Rakesh Dubuddu, Founder, Factly Opposition Alleges ‘Political Conspiracy’ Between Govt and EC.

The ECI, on 31 May 2018, had issued an order calling for a special summary revision of photo electoral rolls across the state of Telangana.

The enrolment campaign was to end on 31 July.

Following enrolment, the EC had ordered the Integrated Draft Electoral Roll on 1 September.

The final publication of rolls was scheduled for 4 January 2019.

However, on 6 September, the then chief minister of Telangana K Chandrashekhar Rao dissolved the Telangana Assembly. On 8 September, the EC terminated its ongoing special summary program, and communicated a new truncated schedule.

A PIL filed on 5 October by Telangana Congress leader and former minister, Marri Shashidhar Reddy, contended that this truncated notice by the EC would “unjustifiably create a process that is incapable of curing mass and serious deficiencies of the electoral rolls of Telangana and Andhra Pradesh with regard to several lakhs of voters.”

The Congress in Telangana has alleged a political ‘conspiracy’ in the new truncated schedule. Speaking with #KhabarLive, Telangana Congress president, Uttam Kumar Reddy, said that it had made him “suspicious” of the EC.

Due Process Ignored?
The Electoral Registration Officer (ERO) is a quasi-judicial authority and is vested with the power to carry out suo moto deletions, but he has to give reasonable notice to the citizen and also hold a public hearing to listen to any contestations. The provisions pertaining to the deletion of voters are prescribed in the Representation of People Act, 1950 and Registration of Electors Rule, 1960.

Section 22 of the Representation of People Act, 1950
The Act states rules pertaining to correction of entries in electoral roles and states that “before taking any action on any ground under clause” the Electoral Registration Officer “shall give the person concerned a reasonable opportunity of being heard in respect of the action proposed to be taken in relation to him”.

Section 21A (C) states that prior to deletions “the registration officer shall make every endeavour to give him a reasonable opportunity to show cause why the action proposed should not be taken in relation to him.”

Bihar serves as a case study in the false positives and negatives that the software had thrown up in 2015, a year when the state went to polls.

An RTI query has revealed that during the pilot phase, the software had identified almost 37,54,648 voters from among the draft publication of electoral voter rolls as possible duplicates. However, after all the possible duplicates were verified by the field officers, only about 2,47,789 voters were deleted.

The commission notes that after the field verification when the software was run once again on the voter rolls, it resulted in further duplicates identified in these sanitised rolls. #KhabarLive

Is ‘Tussle Brewing’ Between ASI And GHMC Over Part Of ‘Charminar...