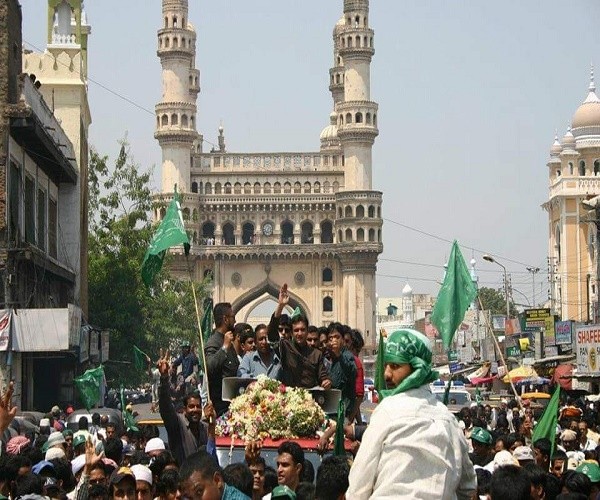 The AIMIM has its own vote bank intact while the anti-AIMIM political space is fragmented as the Hindu vote has many contenders. In this elections, the strong hold of AIMIM is skinned with anti-incumbency factor and internal feuds. The sentiment of Muslims is intact and they will not allow anybody to enter the fray.

Exploiting the changed political context, the Congress party is running a more spirited campaign in the Old City of Hyderabad in a clever bid to rally the anti-AIMIM vote. During the decade-long period when Congress was firmly placed in the saddle of power in the united Andhra Pradesh, it had a clandestine understanding with the AIMIM which dominates the polity of Old City with its politico-religious mobilisation and appeal.

This kept the Congress tradition support in this part of the city in dormant. But, still Congress is the only other party that enjoys at least 10 to 15 per cent vote share even in the divisions where Muslims constitute almost the entire electorate.

Due to fear of a backlash in Muslim vote bank, several secular parties hesitate to take on AIMIM in the Old City. Even the Telugu Desam during its heyday also did not make a significant effort to break this impregnable stronghold of AIMIM. Attempts by other political parties proved to be a feeble resistance to the stranglehold of AIMIM. For instance, the CPI(M) presented a militant fight to AIMIM.

There were even clashes between AIMIM and the CPI(M). But, the party could not create a popular mass base for itself. The communal hold on the Old City polity deterred the penetration of an irreligious party like CPI(M). The MBT experiment was largely confined to certain pockets and sections of Muslim electorate.

The ruling Telangana Rashtra Samiti has now entered the space vacated by Congress as an undeclared ally of the AIMIM. True to its character, the AIMIM is forging an unwritten understanding with the party in power in the State.

With the absence of communally surcharged political climate, the BJP is also not in a position to rally even the Hindu vote in a big way. The TDP now in alliance with the BJP cannot even aspire for a sizable share of the Muslim vote in the Old City.

Thus, the political space seems to be one that of AIMIM and no one particular party. The anti-AIMIM space has become no party land. Precisely, the campaign managers of Congress seem to have made a correct calculation to fill the vacant political space. The resurgence of Congress in many States as a force that can limit the advance of BJP brings additional credibility for Congress among Muslim voters.

Not just the Hindus who generally oppose AIMIM, a section of Muslim electorate, especially the educated Muslims, are averse to AIMIM style politics. Due to virtual monopoly of AIMIM in the Old City, a section obviously gets alienated from AIMIM. But, this alienation was not pronounced as the anti-AIMIM political space was not strongly discernible.

The Congress has even national imperative to resist the advance of AIMIM and even creep into its base if possible. The Congress tactical friendship with AIMIM might have benefited the both for a decade as long as the former was in power. But, the AIMIM using its tactical understanding with the Congress got further entrenched in the Old City.

Much to the consternation of Congress, the AIMIM evinced national ambitions to rally the Muslim vote which otherwise largely goes to secular parties with Congress being the main beneficiary across the national political spectrum.

The Congress had a bitter experience with the AIMIM’s national political project especially in Maharashtra. The AIMIM’s attempts to enter Bihar could not materialise in any serious measure due to the political arithmetic ushered in by the Mahagathbandhan of Congress, JD (U) and the RJD. The Congress antipathy to AIMIM national political project is evident from the fact that it has even accused AIMIM of hobnobbing with the BJP.

The secular political parties especially Congress sincerely believe that AIMIM is a Trojan horse that can play spoilsport in many States, especially Uttar Pradesh. In case the Congress makes any headway in Old City of Hyderabad and challenges AIMIM to any reasonable extent, the party can not only attract the Muslim voters disillusioned with AIMIM politics but even the Hindu voters who await a tough challenge to AIMIM. It may be recalled here that the Congress could even win Hyderabad MP seat before the Asaduddin Owaisi phenomenon.

The dominance of Muslim voters is not just confined to Old City alone. In many divisions outside the traditional Old City, Muslims constitute a decisive force. It would be in fact relatively easier to challenge AIMIM in these divisions. But, this can only happen if Congress creates a political climate that gives confidence to anti-AIMIM voters – either Muslims or Hindus.

But the Congress suffers from a serious credibility gap as it was the party that propped up AIMIM for a decade during its tenure in power. Will the people believe the Congress claims of a credible alternative to AIMIM? However, Congress has three factors that legitimise its entry into Old City polity to challenge AIMIM.

First is the absence of any other party in the anti-AIMIM political space in Old City. Secondly, the Congress is the only national political party which can resist the BJP in the country. Third factor is the traditional support base it enjoys despite its rapid erosion in the past due to its surrender to AIMIM while in power. Further, the Congress while in power implemented Muslim reservations that created a positive image for the party among these sections of society.

The MBT has been waiting for long to find an ally to hit at its arch-rival AIMIM. The party seems to be encouraged by the Congress’ new-found enthusiasm to take on AIMIM. The Congress and the MBT are having a sort of ground level understanding.

But, the Congress was little late in hatching an electoral strategy to challenge AIMIM. It would have certainly yielded more dividends if it had planned this strategy a little earlier. The campaign period is too short to change the correlation of political forces against AIMIM that has developed into a strong grassroots political organisation over decades in Old City. The spokesperson of AIMIM quips that people chide AIMIM till the last hour, but when it comes to polls, they will vote for it.

The AIMIM and the TRS seem to be an interesting relationship in this civic poll. The general understanding in political circles is that these two parties have arrived at a clandestine deal. This allegation is substantiated by the fact that the State government is not taking any action on the case related to the alleged hate crimes perpetrated by its leader.

Besides, the two parties are not critical of each other indicating bonhomie. But quite interestingly, ground reports suggest that AIMIM and TRS are locked in a fierce contest in a number of divisions. This contrast between macro political picture and micro political reality is puzzling but not without an explanation.

The TRS and the AIMIM are helping each other wherever winning margins are decisive in either’s favour. Thus the two parties are not cutting into each other’s chances to benefit the third party. There are divisions where the contest is between these two parties. Here, the bitter contest continues as such a contest would not benefit others.

The TRS is hoping for an outright majority in the corporation. The AIMIM will pitch in, if need arises. Otherwise, it will continue its independent position. Such a flexible, if not a pragmatic, deal between AIMIM and TRS works out to their mutual advantage. This became essential due to the fact that TRS could also muster grassroots support among Muslim voters in many divisions especially outside the Old City.

The AIMIM was opposed to the bifurcation of the State. The Muslim voters influenced by Telangana sentiment are with the TRS. Similarly, the TRS has some influence over the Muslims who migrated to Hyderabad from other Telangana districts, on whom the AIMIM has no monopoly. Besides, the power and development politics could also muster some support for TRS among Muslim voters.

In the absence of a highly polarised vote, the BJP seems to be lagging behind in projecting itself as an alternative to AIMIM in the Old City. The TDP with its alliance with BJP is obviously in no position to be in the fray.

The AIMIM has its own vote bank while the anti-AIMIM political space is fragmented. The Hindu vote has many contenders. Thus, the AIMIM retains its sway even if there is some erosion in its vote share. #KhabarLive