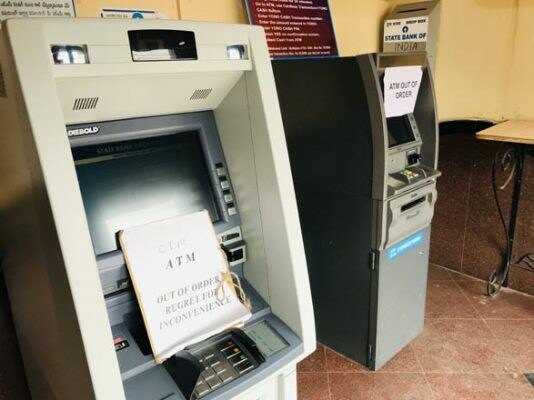 Enough is enough, as everybody murmurs during their ATM visit in Hyderabad. The demonitisation ghost still haunts and nightmare appear to be still loitering around. ATMs with cash have become a rarity across Hyderabad, be it those of nationalised banks or private ones.

While some of them alert the customer before they go in to withdraw cash, with boards of ‘No Cash’ or ‘Out of Order’ hung outside, a majority do not have such boards, and often the customer gets to know that there is no cash only after going through the entire withdrawal process.

There are some ATMs, which are loaded once in a blue moon, and otherwise are just patience testing machines rather than automatic teller machines.

“The one near the Ushodaya supermarket in Hasmathpet is one such example. It rarely has cash and rarely has an ‘Out of order’ or ‘No Cash’ sign outside it,” says Mukesh, a resident of the nearby Manasarovar Heights apartment complex.

The ATM complex on the Dairy Farm road, which has five different bank ATMs, including those of ICICI, in one building, is another example. Cash is a rarity here, so are notice boards.

“There are many ATM kiosks where both the cash dispenser and the cash deposit machines are out of order. It appears the banks are not too keen to keep this service alive for long,” says GSV Prasad, who had to take a long drive to take U-turn ahead of the Vikrampuri traffic signal and drive back, only to find that SBI ATM here out of order.

The SBI ATM machines near the City Centre Mall in Banjara Hills too are not different, rarely dispensing cash, so are some of the ICICI ATMs in the Marredpally area.

At one Bank of Baroda ATM, where the cash was being loaded, the staff insist that machine is loaded regularly, though they are not sure of the same being done for BoB ATMs across the city. The situation is same for most banks, with the public still having to run through at least two to three ATMs in times of urgency to withdraw cash.

At the same time, bank officials and bank employees association representatives insist that there is no cash crunch in the city.

“As soon as cash is exhausted, most machines are immediately refilled. There is no cash crunch as of now in the city,” a bank official said. #KhabarLive

Don’t Forget: Have you been running around in search of an ATM that has got cash? Seeing only ATMs with ‘No Cash’ and ‘Out of Service’ boards? Click pictures, share on Twitter (@khabarlive) and Instagram (@khabarlive) , Facebook (@khabarlivegroup) and LinkedIn (@khabarlive) with the location and bank and also tag (#KhabarLive).