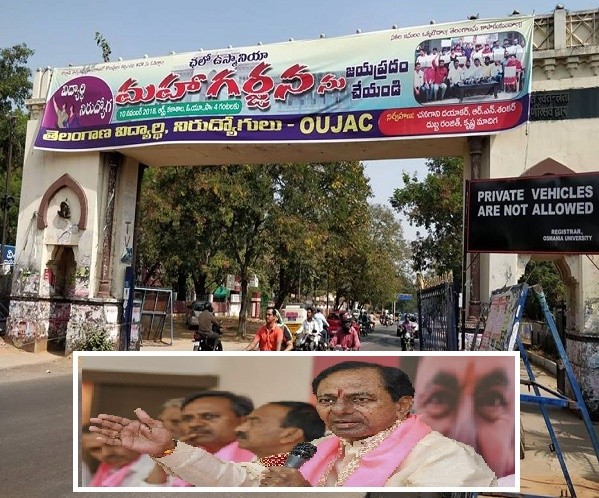 Enraged youth and students say that with the formation of a separate state, several job posts were created, but the ruling Telangana Rashtra Samithi has failed to fill them. From 2012 to 2014, the formation of Telangana was Begari Vishnu’s prime objective. Then a post-graduate student of public administration at Osmania University, Vishnu was quite active in the movement demanding a separate state. He was a part of Osmania University Joint Action Committee (OU JAC), a coalition of student organisations rallying for this very objective.

“Every morning, I would get up, have my food and participate in protests and other meetings being organised to demand Telangana,” recalled Vishnu, now doing his PhD at the university. “I was not alone. There were hundreds of students like me whose routine was the same,” he added.

However, there is a fundament change in the objective of Vishu’s life in the last two years. Today, his main objective is to defeat the incumbent chief minister of the state, Kalvakuntla Chandrashekar Rao – or KCR – one of the icons of the Telangana movement. “He cheated us. Fulfilled none of the promises he made, be it jobs, water of financial stability,” an agitated Vishnu told The Wire.

According to him, these were the three main rallying points of the movement and they had hoped that with the formation of Telangana and with KCR at the helm of affairs, things would improve. However, nothing changed. Mohd Younuss, who completed his MA in political science last year from the university, agreed with Vishnu. He is a state civil services aspirant but due to non-notification of the service exams, he is now looking for career options in academics.

Like Vishnu and Younuss, a former student is also unhappy with the current regime. Requesting anonymity, the student, who was selected for a teacher’s job in June but is still awaiting appointment, told The Wire: “I don’t know whether I should be happy or sad because though I have been selected, I don’t know when I’m going to get my job.” The former student added: “There is no certainty and transparency about the process.”

Over the last few months he has participated in a few protests seeking jobs and regularisation, but he cannot be very public about his views because he fears it can have a negative impact on the job he has been selected for. Vishnu echoed the apprehensions as he himself has been a victim. “There are eight cases against me for participating in rallies and protests since 2014,” he claimed.

Under the banner of OU JAC, students have been protesting regularly. So much so that at the main entrance gate of the university there is a huge banner in Telugu reading, “Chalo-Osmania, make the protest rally of students and unemployed successful. Let us defeat KCR who did not give jobs in Telangana we fought for. Let us all common people come together, save Telangana.”

On November 10, OU JAC organised a massive protest at the university’s Arts College. In February too, a protest was organised on campus demanding job notifications. According to Telangana Today, “During the protest, one of the students, Sandeep Chamar doused himself with petrol and threatened to commit suicide but the police whisked him away.”

Protests also erupted in March this year when Private Universities Bill was introduced in the state assembly. According to a News Minute report, two main state universities – Osmania and Kakatiya – remained closed as students declared a strike. Outside the campuses also, there have been protests seeking jobs and regularisation.

In September, more than 14,000 employees of the Greater Hyderabad Municipal Corporation (GHMC) went on a strike demanding regularisation of their jobs. GHMC Employees Union president, Udhaari Gopaal said, “chief minister K. Chandrashekar Rao promised earlier when he had come to the GHMC office that jobs of all NMR employees will be regularised but no action has been taken on it yet.”

Similarly, on October 27, the Times of India reported that “Thousands of jobless youth vented their fury at a job fair organised by the state government here by breaking plastic chairs and hurling some in the air over what they called the government’s ‘empty promises.’ Many of the aspirants had come from faraway districts in hopes of getting a cushy job, but had to return empty-handed.”

According to Deccan Chronicle, in March, around 300 ex-home-guards who had served in undivided AP staged a protest demanding the government either give back their jobs or provide alternative work.

However, as per a member of the Telangana State Public Services Commission (TSPSC), ever since the formation of the state, 17,000 people have already been recruited for various jobs.

“In the first year we could not do anything because there was no record and the Andhra Pradesh government was not willing to share the information. And later there was shortage of staff for the recruitment process itself,” claimed Mateenuddin Quadri, a member of the TSPSC, in a telephonic conversation with The Wire. He also claimed that by the end of next month (December), another 20,000 people will be appointed. “The process is about to complete. That means in the last two years we have been able to recruit 37,000 people,” he added.

Many believe KCR’s failure to provide jobs may cost him the upcoming election. When pointed out that unemployment is a national phenomenon, Vishnu said, “Unlike central level, there is no need to create jobs,” adding “it is already there. All the state government has to do is fill them.”

According to him, with the formation of Telangana, jobs have already been created automatically but the current regime is not interested in filling them. “What is even disheartening and frustrating is that while in Andhra Pradesh appointments are happening on regular basis, following the calendar, here even notification is not being issued on time,” said Younuss.

It is worth noting that on independence day last year, the chief minister said that the Telangana government was taking measures to provide 84,876 jobs. According to a media report, “With this, 112,536 posts have been created which are over and above the one lakh figure that has been promised.

The government has issued instructions to start the process of recruitment of jobs to fill the vacancies that are required for next year also,” the chief minister said. Again, in October 2017, Rao reiterated that the state government was committed to filling the 1.12 lakh vacant posts in various government departments.

What has also baffled the youth and students is that while job promises remain unfulfilled, KCR has gifted gold to deities using taxpayer money. Last February, the chief minster offered gold ornaments worth Rs 5.5 crore at Tirupati temple. “This clearly shows that KCR’s priorities have changed,” argued Vishnu and Younuss.

“Similarly,” said the duo “while the government is hardly paying any attention to the state universities and education institutions, it is promoting encouraging private universities to push corporate and private interests,” they alleged.

Vishu said he will do everything to ensure KCR and his party’s defeat. He would also not be against campaigning for Maha Kutami, the grand alliance, despited being a member and president of leftist students’ organisation Progressive Democratic Students Union, Osmania University unit. “We cannot tolerate him any further. He must go,” he declared.

Meanwhile, other student leaders have also started campaigning against Telangana Rashtra Samithi. “A batch of 20-30 unemployed youth have already started campaigning in Narsampet village. Other batches too will start their campaign and will cover all villages and universities across the state and will create awareness among student communities, their parents and relatives,” K. Manavatha Roy, chairman of Nirudyoga Vidyarthi Joint Action Committee told #KhabarLive.