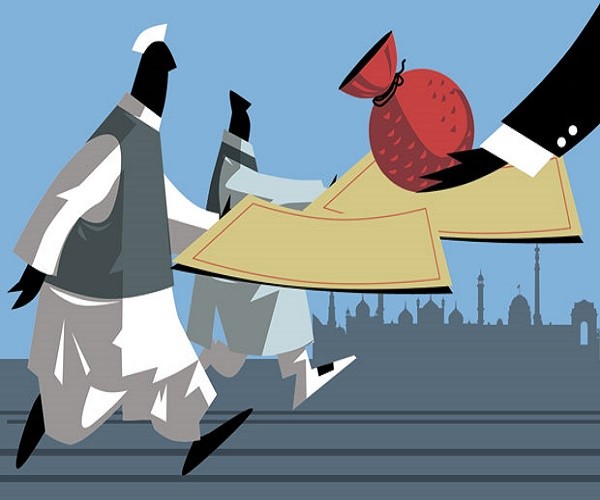 An exposé on KhabarLive has shown that electoral bonds carry unique hidden serial numbers which can help track political donations, contradicting the government’s assurance that such donations will remain anonymous.

Here is more — KhabarLive’s investigation further suggests that instead of acting independently, the State Bank of India (SBI) is in close daily contact with the Ministry of Finance on matters related to the issuing of electoral bonds.

When introduced by the government on 2 January 2018, the idea behind electoral bonds was to make political donations transparent and yet maintain the anonymity of the donor. Entrusting a single bank, the SBI, with the responsibility of selling electoral bonds, the Ministry of Finance’s notification clearly stated that the buyer’s information will remain confidential.

‘All Instructions Coming From Finance Ministry’: SBI Official
To understand the procedure behind the purchase of electoral bonds, I posed as a buyer at a designated SBI branch to buy a bond worth Rs 1,000. I submitted self-attested photocopies of my Know Your Customer (KYC) documents, including PAN card, Aadhar card and passport, with a completed form to purchase an electoral bond.

Self Attestation Not Enough, Need Originals
The bank officer demanded to see the originals of all my KYC documents. I showed him my original passport and Aadhar card but I didn’t have my original PAN card as it had been misplaced. I asked if a self-attested photocopy of the PAN card would be enough, pointing out that the government has announced that self-attested photocopies of KYC documents will be accepted.

A senior SBI bank officer told me that KYC verification is happening at “two levels” for the sale of electoral bonds. At the first level of verification, the self-attestation of KYC is done by the customer, but at the second level, the bank official needs to see the original documents.

The SBI official said that the officer who verifies the original documents is required to prepare a note under his name and designation. All formalities are completed meticulously “as the government is keeping a close watch on the sale of the electoral bonds.”

ALSO READ:  Inside The Baba Ramdev’s 'Patanjali Empire' And Rapid Rise Of Products

Electoral Bond Buyer NOT an SBI Customer – Really?
I informed him that I hold a savings account in SBI and I have also taken a home renovation loan from SBI based on these documents (even then I didn’t have my original PAN card). I asked him, if the bank didn’t have any problem in giving me a loan without seeing my original PAN card, why do they have a problem in issuing an electoral bond? I told them that they can easily verify my PAN number online in minutes. So, why the problem?

The bank officer, by now slightly exhausted with my queries, said, “madam, iss case mein alag baat hai (It’s a different matter in this case)”. He added that had I come to open a bank account or for any other SBI scheme, he would have accepted my application with self-attested KYC documents, but added,

“In this case we cannot as all instructions are coming from the Ministry of Finance.”
Also Read: KhabarLive’s Exposé on Electoral Bonds: Read the Forensic Reports

“We Submit a Report ‘Upar’ Daily”
When I persisted with asking the SBI official to issue the bond in a couple of days after verifying my KYC documents, he said it was not possible,

“Roz data collect kar ke humein shaam ko aage bhejna padta hai, aap samjh rahi hai na ki kitna sensitive cheez hai. Main aapse ab kya bolu. (We have to collate data on a daily basis and forward it, I hope you understand how sensitive this is, what else can I say.)”
I called my chartered accountant (CA) to ask how long it would take to get a new PAN card.
My CA said over a week. I didn’t have so much time as the electoral bonds were available only for the next four days. So I went back to the SBI official asking for a way out. He said he had already escalated my matter ‘upar’, and they will get back to me in case something can be done.

What the SBI officer said clearly suggests the government’s involvement in the entire process of the sale of electoral bonds.

He further underlined his helplessness saying, “hume bhi bura lag raha hai ki ek customer humare pass business ke liye aa raha hai aur usse hum chhoti si baat ke liye mana kar rahe hai. (We are also feeling bad that a customer is coming to us with some business but we turning her away because of a small matter).”

“These are the requirements prescribed by the Government of India. We are merely the nodal/operating agency. We have to follow every guideline of the Ministry of Finance which has to be completed at the end of the day and sealed and nothing can be further incorporated and one soft copy has to be uploaded.”

SBI Gives Delayed Approval Because of ‘Small Amount’
The next afternoon I got a call from the same SBI official. He reconfirmed the amount with me and said his seniors had agreed. As the amount was just Rs 1,000, a bond can be issued to me and I can collect the bond the same day. He added that had the amount of the bond been higher, he wouldn’t have been able to issue it.

Not many questions were asked at the bank this time. The bank official took me to the same cabin to maintain secrecy and started the process to issue the bond with the assistance of his juniors.

SBI Gets Daily Instructions From Fin Ministry, But Doen’t Share Info – Believable?
A top level officer of the SBI, in its statement to KhabarLive, admitted that there is a unique hidden serial number on the bond. He also said,

Since the SBI is taking minute instructions from the finance ministry, is it too much of a stretch to conclude that they are also passing on donors’ information to the government?

What did the bank official imply when he said that those buying electoral bonds are not SBI customers?

Add to this the fact that the existence of unique serial numbers on the bonds was kept a secret from the public and those buying the bonds. KhabarLive asks — why insert these hidden numbers and not tell the public? If not to undermine anonymity and track political donations, then what was the government’s intention?

SBI Says Electoral Bond Numbers For Security – Then Why Hide Them?
In response to KhabarLive’s investigation, which found that electoral bonds have hidden alphanumeric sequences printed on them to track the link between donors and political parties, a top-level officer at the State Bank of India said that the numbers are merely a “security feature”.

We don’t believe this code is a tracking mechanism. This was put in those papers as a security feature only.

The official has thus confirmed the presence of unique alphanumeric sequences on electoral bonds. This contradicts what Union Finance Minister Arun Jaitley had said in the past about political donations via electoral bonds being “completely anonymous”.

He had assured the country that “how much each donor has distributed to a political party would be known only to the donor.”

Besides, if the numbers are not being used for “tracking”, why are they unique to each bond?

The SBI official’s statement raises yet another important question.

If the existence of these unique hidden numbers is for “security” purposes only, then why aren’t the existing common watermarks on the electoral bonds enough? They too are meant to provide security for those who have made donations.
Also Read: Secret Policing? KhabarLive Finds Hidden Numbers on Electoral Bonds

As KhabarLive found out through forensic tests, these hidden serial numbers are visible only under UV light at the top-right corner of the original document. The unique number and its hidden nature suggests the possibility that the government is directly monitoring the political preferences of India’s masses.

After running them through forensics, the results showed that both the bonds contained the unique numbers OT 015101 and OT 015102 respectively, discoverable only in fluorescence when examined under UV light. #KhabarLive

(This article will be updated with replies from the SBI and/or the Ministry of Finance.)