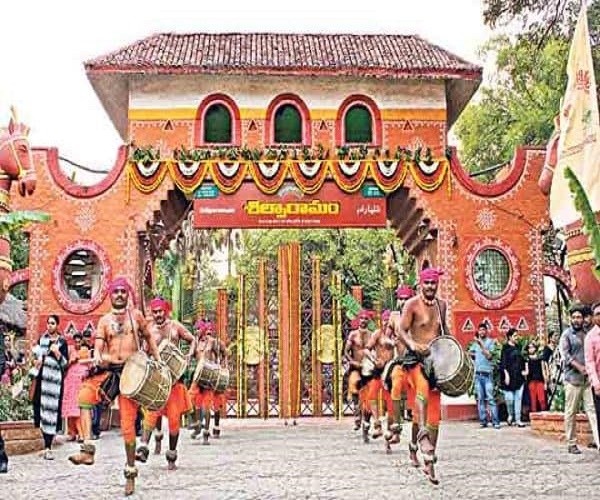 Have you ever seen an enchanting village setting, which takes you back to the days of yore right in the heart of the city? Well, in this context, nothing fits the bill better than Shilparamam, the arts and crafts village in Madhapur, surrounded by major IT companies and gigantic high-rises, which has much more to offer than what is seen from outside.

It all started around 1992, when the Government of India introduced the Urban Haat scheme, in which the country was divided into seven cultural zones and each zone had to promote and exchange its culture. For the south, it was Thanjavur, but, later, Hyderabad was allotted one, which is none other than the Shilparamam.

While in all other zones the name was Urban Haat, only in Hyderabad, the name was Shilparamam. “It so happened that the then Governer of Tamil Nadu, Marri Chenna Reddy, who was the head of the Urban Haat scheme, wanted a local name instead of Urban Haat. I approached Jnanpith awardee Dr C Narayan Reddy to name this arts and crafts village and he named it Shilparamam, which means a place where the traditional arts and crafts are promoted and visible”, says Kishan Rao, Special Officer, Shilparamam.

Though the allotted land then was 45 acres, now, the arts and crafts village has expanded to 52 acres, which consists of a museum, boat- riding facility, a marriage hall named Sampradaya Vedika, Rock Heights, Mountain Heights, stalls, amphitheatre, bullock cart rides, yummy street food and much more.

Artistes from other States and countries come and perform in Shilparamam. As Shilparamam is located in the heart of the city, people assume that the prices of products may be on the higher side, but the entry fee is just Rs 40 for adults and Rs 20 for children. “We give the stalls for free during a particular period, and the amphitheatre, the electricity and generators used during the shows are also free.

As we want to create a platform for artistes, we also take care of their boarding and lodging on the premises, ” says Kishan Rao, who is planning to come up with a concept on the lines of Kalakshetra, where those interested can come and learn music and dance. He also plans to set up a library where books on tradition and culture will be made available.

The main aim to set up Urban Haat schemes is to eliminate middlemen, give a direct opportunity to weavers and other craftsmen to showcase their products, and, to some extent, the management of Shilparamam has been successful in this. “We are trying our best to encourage the artisans, and, when it comes to promotion, we are giving our full co-operation to them.

The significant thing is, not a single festival goes without being celebrated at Shilparamam. During Dasara, people perform Shami puja to the Jammi tree (Prosopis cineraria), but not many Shami trees are available in this concrete jungle; so, we performed this puja where a lot of families participated,” says Kishan Rao who is also planning to complete the Brindavan project which will very soon be thrown open to visitors.

Shilparamam is a self-sustaining project, where, on an average, nearly 8,000 to 10,000 people are seen on weekends and not less than 4,000 visitors on a week day. “Visitors from another corner of the city requested for a mini-Shilparamamto be set up in Uppal area, for which IT Minister KT Rama Rao has given a green signal and which will be ready in two months, ” says Kishan Rao, who is also the Vice-Chairman and CEO of Yadagirigutta temple and plans to construct a Shilparamam there.

Shilparamam is a well-maintained arts and crafts village where photography is allowed. Here not a single pebble or stone is wasted, and is turned into creative showpieces. #KhabarLive

The Story Of An Innocent Doctor Who Spent ‘Eight Months In...