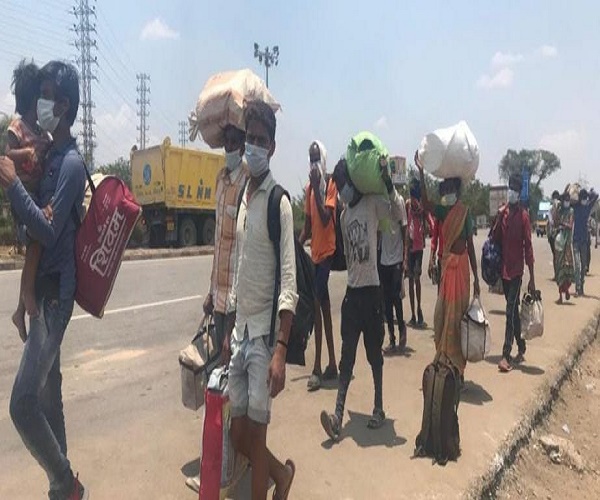 Experts, Activists, volunteers and concerned citizens working together as ‘Advocacy COVID Lockdown Collective’ has written a letter to the Chief Minister of Telangana, K Chandrasekhar Rao regarding their concerns for migrant workers returning back to home states. The collective has also given a list of suggestions.

Following the order from the State Human Rights Commission on May 5, the Government of Telangana has requested the South Central Railways (SCR) to run 40 trains per day for over a week to facilitate the return of the migrant workers. Thereafter, media reports indicate that about 50,822 migrant workers have reached their home states in almost 45 trains, pointed the Collective.

“However, our collective experience in the past one week has been that, compared to the actual requirement and requisition, fewer trains have run and there are still a large number of workers who are awaiting return,” stated the Collective in its letter.

They have also noted their observations and suggestions. Here is a gist:

ALSO READ:  Telangana Has A 'Bird Restaurant' For 'Vultures' To Bring The Species Back From Extinction

Suggestions
Very clear step-by-step instructions in text, as well as pre-recorded audio and video in Hindi, Odiya, Bangla, etc about the entire manner of online and offline registration and travel process, must be made available and widely publicized.

On the other hand, the Hyderabad’s migrant workers race against time to reach home before monsoon is quite decisive. “If we don’t find a vehicle, we will go on foot. What else can we do?” asks the pregnant construction worker, on her way to Chhattisgarh by foot along with her family.

Shiv Kumari Vaishnav is seven months pregnant. A native of Raigarh district, Chhattisgarh, the 30-year-old came to Hyderabad to work as a construction worker nearly a year ago. She is now desperate to reach home, even on foot, if that’s what it takes.

Kumari was among the hundreds of migrant workers who were waiting at Outer Ring Road (ORR) in Hyderabad’s Medchal on Thursday, in hopes of finding a goods carrier that would transport them to their village.

“If we don’t find a vehicle, we will go on foot. What else can we do?” she asks, helplessly. The pregnant woman has a 5-year-old daughter too, who is with her on this extremely arduous journey.

Kumari was staying in Turkayamjal, which is on the outskirts of the city. For many days since the lockdown was first announced on March 25, she and her relatives from Chhattisgarh had been planning to return home. With no work, their measly savings, meant for farming, was draining out.

After nearly 40 days of the lockdown, the Ministry of Home Affairs (MHA) finally allowed inter-state travel of stranded migrants workers on April 30. State governments were asked to arrange transport for their travel. As per the government announcement, Kumari, along with her relatives, had enlisted and procured a travel pass on May 5 from the Adibatla police station.

The police assured them that when a train is arranged, they would call them. However, nine days later, she is yet to receive a response from them.

“We called them every day, to check if any vehicle was arranged. They kept saying that the arrangement would be made soon. One policeman said, ‘If you are so desperate to go home, go on foot.’ So we started our journey,” Kumari recounts.

Kumari has a small parcel of land in Raigarh, about an acre. With the southwest monsoon about to arrive, Kumari wants to reach their hometown as quickly as she can, so that she can cultivate her land.

“We have a lot of work there. It is the agricultural season. Besides working in our fields, we will work in others’ fields and make a living,” she points out. Kumari is traveling with her relatives, about 15 of them including small children, and they too want to work in their fields.

At the Medchal ORR, lorry drivers are demanding between Rs 1,200 and Rs 2,000, depending on the distance, for providing a small space on their vehicles. “We cannot afford these trucks. The fare is too much,” says Omkar, Kumari’s husband, as he desperately looks for the arrival of trucks leaving for Chhattisgarh.

A truck driver nearby, who has been witnessing these scenes of large numbers of migrants walking, carrying their luggage and small children says, “This is the plight of the poor. They are only required for votes. Other than that nobody cares about them.” #KhabarLive #hydnews