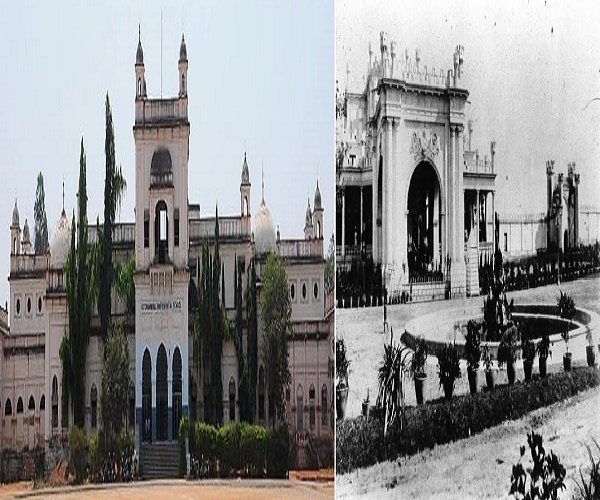 Owing to the number of nobles and learned men who came to this city and made it their home, it also led to many of them spending the entirety of their lives here. One such person was Hazrat Ujala Shah. His tomb is situated near ‘Phisalbanda’ in Saidabad in Hyderabad. He was born in 1707 and came to the city during the region of Nawab Sikandar Jah. He died at a ripe age of 102 years in 1829. The marble work around his grave was constructed by one of his devotees, Lateefullah in 1847.

E’di Bazar
Beyond the Paigah tombs is the Qutub Shahi locality called the Edi Bazar. It is said that these used to be the market (bazaar) during the months of Ramzan and Bakrid, enabling the locals to make purchases for the festivals. The tomb of Nawab Gowhar Ali Khan, Mubariz-ud-daula who was the younger son of the third Nizam, Nawab Sikandar Jah is located here. He was a patriot and a rebel.

He was against the British and was imprisoned thrice for his plans to overthrow them and kept in the Golkonda Fort. Close to ‘Amin Manzil’, on way to Saroornagar is a beautiful Masjid, ostensibly constructed by Abdullah Qutub Shah’s courtier Mir Jumla. Behind the masjid was a Sarai – an inn, some remnants of which were visible till a few years ago, and have been lost due to our apathetic approach to history and beauty.

Saroornagar
This locality was probably the hunting ground for the Qutub Shahi rulers, and was certainly so in the times of the Asafia rulers- the Nizams. There was a dense forest here with numerous animals. The area, as we know it now, started developing when Mir Nizam Ali Khan, the second Nizam, gifted the land to his Prime Minister Arastu Jah’s wife, Saroor Afza begum.

ALSO READ:  Inside The Baba Ramdev’s 'Patanjali Empire' And Rapid Rise Of Products

Arastu Jah got a beautiful palace constructed for his wife on this land, along with a lake and laid out a garden too. Other nobles followed suit, constructing palaces and havelis here, which were resting places on their way to and from hunting expeditions. Unfortunately, neither the gardens nor the palaces remain; apart from a shrinking small pond.

The sixth Nizam, Mahboob Ali Pasha also had a palace constructed here for his grandmother, Allahrakhi Begum, known as the Saroornagar palace. It was converted into Victoria memorial and later into an orphanage. Raja Kishan Pershad also had his palace in Saroornagar. There is a bog lake in Saroornagar called Narsing Raj Ka Talaab (lake) or Saroornagar Lake. #KhabarLive