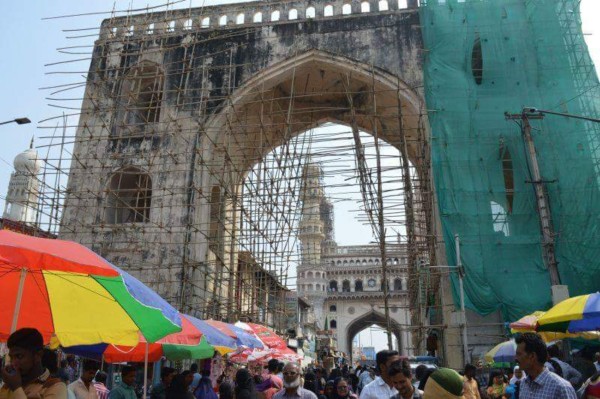 The GHMC has taken up restoration of various works at places with has historical importance in the city.

The Charminar Pedestrian Project which was in slow progress from several years, now the works are being taken up on war footing basis and the works pertaining to conserve Char Kaman near Charminar are also being taken up on priority and the importance places of Old City like Chudi Bazar, Murgi Chowk, Clock Tower, Zulfikan Kaman and Mojamjahi Market are also on very fast phase.

The CPP project which has been taken up in October 2006 with a cost of Rs. 35.10 crores works of the project is now being taken up on priority after municipal minister K.T. Rama Rao has assumed charge where he personally inspected the project and directed the officials to expedite the works to be completed in stipulated time.

The works pertaining to removal of encroachments from Madina to Pathergatti are almost in completing stage. All the flex banners, hoardings unwanted publicity materials are almost removed to get back the old heritage beauty in the old city areas.

The clock tower at Murgichowk restoration works at cost of Rs. 60 lakhs are being taken up and the officials are personally monitoring to complete the same at the earliest.

The hoardings, banners etc., which are observed from Madina to Gulzar House have also been removed as per the directions of the Principal Secretary, MA&UD in the recent visit to old city.

ALSO READ:  Need A Tailor? Just 'TailorMe', All Your Tailoring Needs Is Just A Click Away

For overall development of Mojam Jahi Market an approximate estimated budget of Rs. 10 crores the works are being started. To safeguard the heritage properties of 400 years old in old city the GHMC is striving hard to complete the works with historical importance on priority as per the directions of KTR and DR.B. Rammohan, GHMC mayor. #KhabarLive