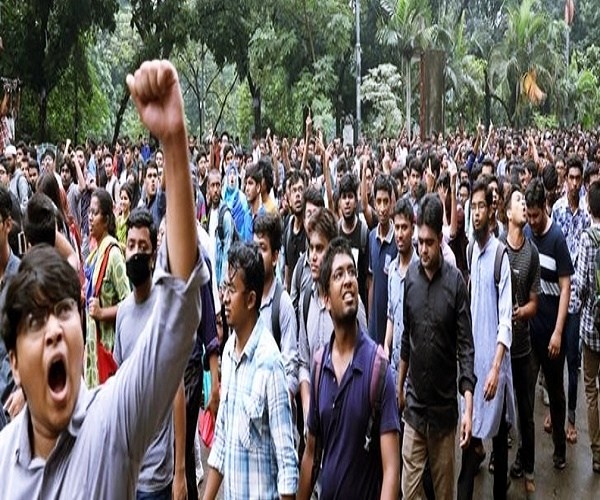 The Young India Adhikar March on February 7 renews hope that the country’s young population hasn’t been subdued into inaction.

On February 7, 2019, the national capital will witness yet another visible demonstration of dissent. Indeed, at this crucial moment of politico-cultural turmoil when there is widespread discontent among people, the proposed rally of the youth (the Young India Adhikar March) seeks to convey a powerful message: the youth have the eyes to see beyond the propaganda machinery of the ruling establishment, they are capable of realising that all the narratives of the ‘good days’ that Narendra Modi and his team of lieutenants boast of are essentially shallow, and what prevails is the harsh reality of joblessness, corporatisation of education, with its inherent exclusionary principles, organised attacks on public universities and increasing reproduction of social inequality.

In a way, it is heartening to see the youth coming to the streets and translating their ‘private troubles’ into what sociologist C. Wright Mills would have regarded as ‘public issues’.

It is not easy to grow up as the young in such times characterised by hyper competitiveness, acute career anxiety, parental expectations, peer pressure, ‘nationalist’ hysteria, ‘religious’ passion and above all, the seductive charm of consumerism. Study, earn, be ‘successful’, consume, and lead a ‘good life’ – one continues to hear this ‘pragmatic’ approach to life from school principals and parents, from coaching centre ‘gurus’ to professors in charge of ‘placement cells’, and from the ‘hidden persuaders’ the market hires to sell the packages of ‘happy living’ – a ‘presentable’ wife/husband, a ‘dream house’ in a gated community, summer holidays in Switzerland, and all sorts of insurances, savings and investments for the future.

In the name of pragmatism we ask them to be selfish, and we want them to remain insulated from the ‘murky’ domain of politics. ‘Bright’ people go to America, and those who are ‘useless’ do politics, create ‘troubles’, and come to the streets – this is the typical middle class orientation further nurtured by ‘super-hygenic’ private universities free from the ‘deviations’ of Marxism, Ambedkarism, Gandhism and only concerned with the dissemination of what techno-managers regard as market-friendly ‘skills’!

Indeed, the prevalent culture or the entire process of socialisation seeks to produce apathy and selfishness among the youth. Either divert them from critically nuanced political questions through the temptations of a mythical ‘success’, or destroy them through drugs, pornography, the hyper-reality of gadget-induced technological spectacles and a mob psychology of communal frenzy.

Under these hostile circumstances, when you see the youth becoming politically conscious – articulating the genuine concerns affecting them and the larger society and coming together with a creative spirit –you feel that not everything is finished, and there are limits to the ‘culture of silence’ every authoritarian regime seeks to impose on us.

No, unlike the ‘loyal’ children of the politically constructed ‘Bharat Mata’, they are not speaking of Ram temples, surgical strikes or ‘Muslim invasions’. Instead, they are demanding jobs and dignified employment, they want vibrant public universities sensitive to caste and gender equity and they are raising their voices against the ‘saffronisation’ of education. And feel that this is what education ought to do.

Education is not free from politics. Instead, to reflect on the world as a critical learner is to remain sensitive to politics as a creatively nuanced engagement with the discourse of power – the way it is possessed, disseminated and exercised. To grow up in a ‘democratic republic’ is to raise the voice of dissent against whatever destroys the spirit of equality and fraternity, be it crony capitalism, divisive communalism, commodification of education and the trap of patriarchal/casteist structures.

While this energy of the youth fascinates me, am equally concerned about the danger of fragmentation and trivialisation that might affect even a creative movement like this. There are two reasons for this. First, even the radicals, fear, are not entirely free from a sense of possessiveness. ‘We alone represent the revolutionary spirit, and whoever thinks somewhat differently is necessarily our enemy’ – this self-righteous orientation often disrupts the possibility of a shared, inclusive and dialogic space.

For instance, the youth should not forget that in a struggle of this kind, they need everyone – Marxists, Ambedkarites, socialists, Gandhians, feminists, spiritualists and even sensitive people without any distinctive marker of a defined ‘politically correct’ ideology.

Yes, the Marxian methodology of seeing through the prevalent political economy, the Ambedkarite spirit of a casteless society, the Gandhian mode of ecological sensibility and satyagraha as an art of resistance, the feminist art of deconstructing patriarchy and the spiritual urge to rescue religiosity from the politics of hyper-masculine nationalism – let the streets of Delhi witness this spectrum of possibilities on February 7.

The second danger is that in this election year, all sorts of attempts will be made to condemn and appropriate this protest. While the ruling establishment – known for filing sedition charges against the dissenters like of Kanhaiya Kumar and Umar Khalid – would condemn it, and see it as yet another ‘anti-national conspiracy’ against Modi’s ‘good governance’, the leaders of the ‘opposition’ parties would not like to miss the opportunity to make their presence felt in the rally.

Yes, the youth need moral support. And as the strategists would argue, there is no harm if political celebrities like Kapil Sibal or Akhilesh Yadav ‘praise’ them. However, it is important for them to make a distinction between genuine concerns and political Machiavellianism.

After all, in the highly corrupt political culture we live in, and in a toxic environment of the legitimisation crisis we witness in every domain of life, even the ‘opposition’ is not as virtuous as it pretends to be. Hence, the question arises: is it possible for the youth to translate this resistance into a refreshingly new language of politics – free from, say, Amit Shah’s aggression as well as Chandrababu Naidu’s potential unpredictability – and the intellectual poverty of the rightist assault as well as the extremely narrow identity-centric politics of Mayawati? #KhabarLive