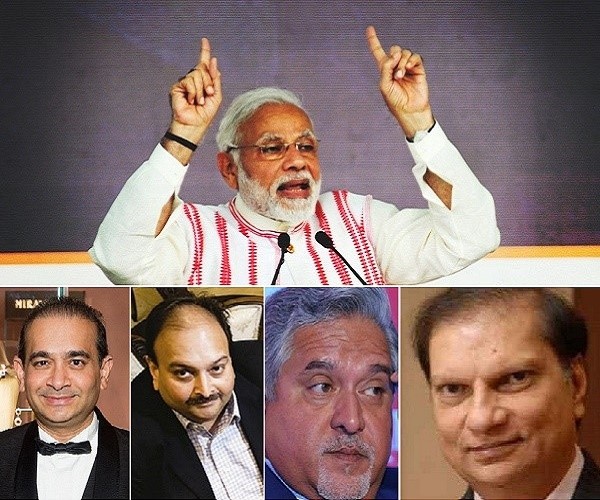 The talk is about sending the Bangladeshis back but the focus seems to be on sending Nitin Sandesara, Nirav Modi and Mehul Choksi off. It’s almost beginning to seem as if separate counters have been opened at Indian airports ‘for those fleeing India’ as a special measure to facilitate the escape of individuals who have defrauded banks.

A couple of days ago, Neeraj Chauhan of The Times of India revealed that the latest name in the list of those who have made a run for it is that of Nitin Sandesara. He is wanted in connection with a Rs 5000 crore bank fraud. Sandesara is the owner of a Vadodara-based company, Sterling Biotech. As usual, this significant piece of news has been ignored by the lapdog media

Last month there were reports that Sandesara had decamped to Dubai where he had been detained by the authorities. The news filtering in seems to suggest that he may now have shifted base to Nigeria. Since India does not have an extradition treaty with that country, bringing him back will be a problem. This news has appeared in the Indian Express as well.

For your information, Sandesara’s has not been a solo flight. It is believed that his brother Chetan Sandesara and bhabhi Deeptiben Sandesara have also gone into hiding with him in Nigeria. According to the Times of India report, the Central Bureau of Investigation has booked the Sandesaras – Nitin, Chetan and Deepti – Rajbhushan Omprakash Dikshit, Vilas Joshi, chartered accountant Hemant Hathi, and former Andhra Bank director Anup Garg for fraud. In June 2018, the Enforcement Directorate sealed the company’s properties.

Sandesara is said to have created a network of 300 shell companies in India and abroad to divert a none-too inconsiderable amount of Rs 5,000 crore. Before this, Jatin Mehta decamped after embezzling Rs 6712 crore. He has since acquired the citizenship of St Kitts and Nevis. He made his getaway in 2013 and hasn’t been brought back to India.

The prime minister’s ‘Hamare Mehul bhai’ (our brother Mehul), as Modiji had addressed Mehul Choksi at an event some time ago, is a newly minted citizen of Antigua. As for his nephew, Nirav Modi, his attempt to become a citizen of the Pacific island nation of Vanuatu has not yet met with success.

The uncle and nephew duo is accused of embezzling Rs 13,500 crore. About Vijay Mallya – you must be aware that he actually met finance minister Arun Jaitley and spent a few precious seconds with him before making good his escape. Jaitley too has conceded that Mallya met him with a proposal for a settlement but he didn’t give a fig about it. The finance minister could have revealed this on that day itself. However, it is only after Mallya spilled the beans about having met him that Jaitley opened his mouth.

There are many Gujaratis among the absconders – Nirav Modi, Mehul Choksi, Nitin Sandesara, Jatin Mehta. In a lighter vein, is it a case of some special treatment being meted out, a most favoured clause at work here? It seems as if the government of India has come up with a new scheme – ‘Fleece India, Flee India’. The ones who have fled thus are accused of cheating the banks to the tune of Rs 35,000 crore.

BJP president Amit Shah recently stated in Delhi that crores and crores of people have ‘infiltrated’ into India. The time is not far off when he will dub everybody an ‘infiltrator’.

It is time the people of India stopped listening to him and started packing the stuff they will need to take with them when they flee. With crores and crores of infiltrators gone, Amit Shah will be left alone in India. Then he will actually rule for the next 50 years. When there’s no public, there will be nobody to ask whether Amit Shah is sending the Bangladeshis back or sending Nitin Sandesara, Nirav Modi and Mehul Choksi off – people who have brought a bad name to Gujarat.

Amit bhai, why not first nab those who have defrauded the people of India, reneged on bank loans sourced from the Indian public. Remember you were talking about bringing back the black money salted away in foreign climes? Well, here we have a situation where money is being spirited away from right under your nose.

By the way, you are all set to win elections for the next 50 years. And, despite your polarising politics, branding all Indians as infiltrating Bangladeshis, if you don’t end up winning, it will be an insult to the people’s intelligence.

But the people will prove you right – they will show that your estimation of them is spot on. Isn’t that so, sir? #KhabarLive