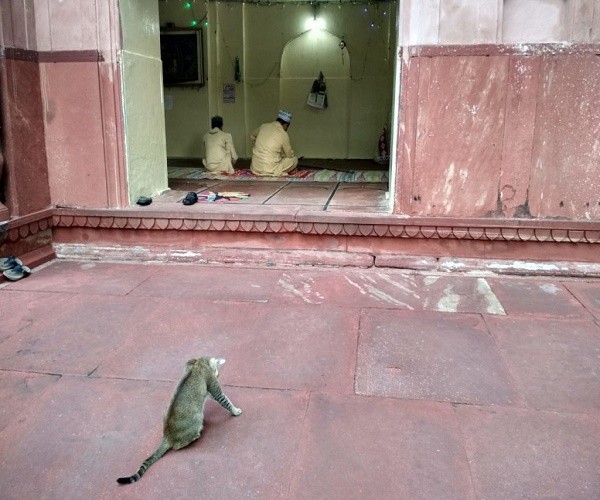 Overshadowed by the Taj Mahal, Sandali mosque, where the grave of Kandhari Begum, the first wife of Mughal emperor Shahjahan, lies, has various mysteries that surround its many feline residents.

In Agra, overshadowed by the Taj Mahal, sits a monument built in the memory of Kandhari Begum, the first wife of Mughal emperor Shahjahan. Popularly known as Sandali mosque, the Archaeological Survey of India-protected burial place of the queen is also home to scores of cats. History has it that the queen, in whose memory the structure was built, had a massive soft spot for felines.

Mohammad Arif, 12, eats three chapattis for dinner, even if he could happily devour his fourth. That last phulka that goes under his pillow eventually makes its way to the cats outside Sandali mosque, which lies right next to the Taj Mahal’s eastern gate, while he heads to school.

This has been Arif’s routine since he was eight and he says there hasn’t been a single day he hasn’t been to mosque, many times along with his friends.

Arif is not alone. Almost everyone who who visits this mosque offer love and nourishment to the cats as it is believed that doing so brings good luck. Found in all colours, shapes and sizes, the cats add to the beauty and liveliness in this mosque, which otherwise lies in neglect.

“Even cats wait for these kids and jump on them as soon they open the bag filled with food. All the cats here are extremely docile and have never attacked on anyone,” said Ameen Ali, a devotee who has been visiting the mosque for three decades. Ameen also claimed that no one can take these cats home as they reach back to the mosque, mystically.

The cats remain inside the premises of the mosque, even though a large number of dogs also lay claim on the land as do several monkeys.

Haniah Bibi, a local of Tajganj area, who brings milk for the cats at the mosque, has a favourite: a light brown feline. According to her, the two white kittens born recently are among the cutest she has ever seen.

Sandali mosque, also known as Kali Masjid, Jinnati Masjid as well as ‘billion wali masjid’, is a three arched, single dome mosque dedicated to Kandhari Begum. She was the youngest daughter of Safavid prince Sultan Muzaffar Husain Mirza Safavi and hailed from the family which are known as the founders of the Safavid dynasty of Persia, the mosque. She married Shahjahan in 1609, at the age of 15.

ALSO READ:  Why Bt-Cotton Hit By Pests More In Telangana And AP?

“As per the structure, it’s clear that the Taj Mahal is not just a monument but a cemetery where Shahjahan wanted to bury all his loved ones, along with him. Shahjahan’s four wives are buried either inside or nearby Taj. All these burials were part of the Taj complex which also comprise of many sarais and markets envisioned in the vicinity,” said professor Syed Ali Nadeem Rezavi, chairman and coordinator of CAS dept of history at Aligarh Muslim University.

Shahjahan’s first wife, Kandhari Begum, died in 1666 and was buried at the place now known as Sandali mosque. His second and third wives, Fatehpuri Begum and Sirhindi Begum, were buried inside the Taj Mahal (not in the main mausoleum but near the gates of the monument). Kandhari Begum was buried outside the monument because she died long before Taj Mahal was built.

According to professor Rezavi, the legend of Kandhari Begum’s love for the cats was first coined by Mahrahrawi who wrote Muraqqa-I Akbarabad, also known as Tarikh-i Hind, during the 19th Century.

“Apart from Muraqqa-I Akbarabad, I never heard of any mention of Kandhari Begum’s love for cats,” he added.

Former senior conservation archaeologist at Taj Mahal, Munazzar Ali, who is now based in Delhi, also recalls his experience with the cats at Sandali mosque. Alsi, who use to visit the mosque often, to offer Namaz, admitted that the meekness of the cats at here was very rare.

“There is no mention of these cats in the history but they are integral part of the mosque. I have seen hundreds of them, gathered in the open area, every time I visited the place,” he added.

For Shamshuddien Khan, an ASI accredited guide who is working at Taj Mahal from last 35 years, the cats at Sandali mosque are not Indian but Irani.

“Itni Khoobsurat hain wo billion. Woh Irani hain. Badhti aabadi or kutto ke masjid ke under aane ke baad se ab billion kam dikhti hain magar wo masjid se door kabhi nahi jati (the cats are so beautiful, they are definitely from Iran. Because of dogs, you see the cats less but they never go far from the mosque),” said Khan, adding that he always asks tourists to visit this mosque but no one is ever really interested.

“Taj Mahal is so hyped that all the tourists only visit Taj or the Agra Fort here. A couple of other monuments which attract tourists are Fatehpur Sikri and Itimadaulah,” he further said.

Mohammad Junaid, the Imam at Sandali mosque has another story to tell.

“The cats are not here because Kandhari Begum’s love for them. They are here because this mosque is infested by Jinns. It is said that Jinns can turn themselves into three creators, man, snakes and cats, hence these cats have been bestowed with divine powers. This is the reason why the people who visit the mosque offer milk and meat to these cats to get their wishes fulfilled,” added Mohammad Junaid who also claimed that hundreds of cats died here in the mosque in past couple of years because of some disease after which they started losing hair and developed tingling.

Commenting on how the Jinns captured the mosque, Junaid says that places which lie deserted and in neglect for years are captured by Jinns. And because Sandali Begum died long before Taj Mahal was built and everyone was busy with Taj’s construction, no one has ever paid heed to this side.

The mosque remains open till late night on Jumme Raat (Friday). “The number of visitors crosses 250 to 300 on Friday night as the Jinns help people to get rid of the bad souls which enter inside their bodies and try to capture it,” Says Junaid.

The room in the front of the mosque, which is said to be the grave of Kandhari Begum, provides an example of the authorities too largely have eyes for the majestic Taj Mahal. A municipal dustbin lies inside the grave-room along with rugged jute sacks and some broken furniture. The room, with a three-feet tall grave, looks like it hasn’t been cleaned in days and the stink of animal faeces is indicator enough of how much attention is paid to keeping the sanctity of the grave intact.

An ASI official, on the condition of anonymity, said that an old woman had encroached the mosque and used to call herself ‘bhoot bhagane wali’. She use to live in the grave room of Kandhari Begum and ASI never stopped her.

“She then died one day. The stuff inside the room might be her belongings,” he said.

Talking to #KhabarLive, ASI Agra Chief, Vasant Swarnkar, said that that the ASI has recently received the possession of the Sandali Mosque which was earlier being taken care by the Waqf Board.

“The rags and blankets kept inside the grave room of Kandhari Begum are the sheets used by people who visit the mosque for Namaz, every Friday. Rest of the time the room is locked,” he said.

When was asked about the municipal dustbin and broken furniture, the ASI chief says that he will inquire about the matter and will ensure that no one encroaches the grave.

ASI chief also claimed that no monument is allowed to remain open after sunset and he has no idea why the Maulana said that the mosque remains open till late night.

Commenting on the legend of cats associated with Sandali mosque, Swarnkar said that animals will start living at a place where they get food easily.

“As people feed these cats here, they are happily living here. This is all legends to attract tourists,” he added.

For Rajiv Singh, a local guide and a cat lover, there is nothing wrong even if the grave of Kandhari Begum was lying surrounded by the clutter.

“Even Shahjahan was biased for Mumtaz Mahal and hence to keep his love for her alive for ages, he built Taj Mahal only for her while all the other spouses of the king were given small burial spaces near the iconic monument. So what is wrong if this mosque is lying in neglect. But yes, Kandhari Begum also managed to keep her love alive, just like Shahjahan’s, in form of scores of cats which surrounds her grave, even after 350 years of her death,” he added. #KhabarLive

#InsideKhabar: Behind The Story Of ‘Political Drama’ On ‘Raids And Searches’

Why ‘Irrigation Politics’ Dominates On ‘Agricultural Issues’ In Andhra Pradesh?