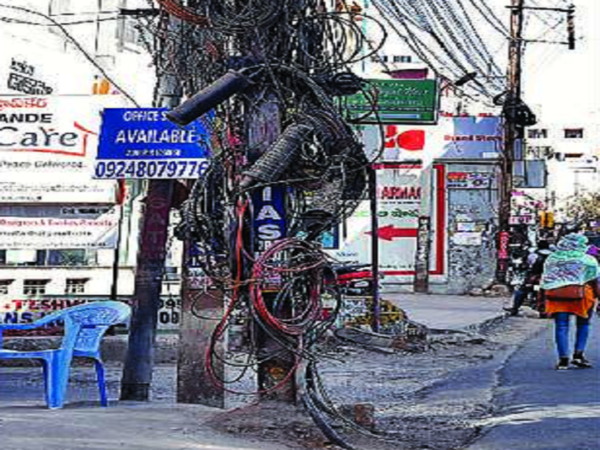 The Greater Hyderabad Municipal Corporation’s (GHMC) longstanding proposal to move all electric and internet cables underground, continues to be a distant dream.

Even now, most parts of the city, including the upscale IT corridor, is ridden with overhead cables dangerously hanging from poles – at some places as low as five-to-six feet above the ground level. Worse, snapped wires are seen left callously lying along busy streets and sidewalks, with heavy vehicles and pedestrians walking through them.

Be it the six-km stretch from Jubilee Hills Check Post to Madhapur Image Garden or the residential cum-commercial Punjagutta belt or even the congested markets of Abids and Old City, the situation is the same everywhere.

Broken wires fall on roofs of road-side restaurants, residential complexes and other commercial establishments and people wading their way through fast-moving traffic on the roads, instead of the pavements, to avoid being hurt by the hanging wires, are common sights in these areas.

Given the prolonged delay in implementation, residents say they have now lost all hope of the situation changing any time soon.
“I have been seeing this since the last eight years when I had started my business in this area. Had it been under my control, I would have tried to cover these poles because the customers do not feel safe while standing here,” said Umesh Gaikwad, 31, an owner of three fast-food stalls in Madhapur.

Apart from the arterial roads that are dotted with numerous such ‘danger zones’, even the bylanes have a similar ugly facade of tangled, unattended wires.

“Because of GHMC’s failure in executing their plan of taking these wires underground, mishaps, especially during the rainy season, continue to haunt the city. The chances of people getting electrocuted are still very high,” said K Chandu, a pedestrian spotted in the Jubilee Hills area.

ALSO READ:  Why '32 Million Homes Are In Dark' Despite Modiji Powering Ahead With 'Complete Electrification' In India?

The repeated complaints lodged with the Telangana Transco authorities fallen on deaf ears, has only added to the frustration of people.

While civic officials accept this as a serious problem plaguing the city, they cite th e lack of funds as the reason behind the delay in the cabling work.

“GHMC had long ago planned to build trenches for underground cabling. While cable operators were also supposed to join this initiative, they have not. Now it’s difficult for the government alone to implement the project because even after spending lakhs of rupees cable operators might not abide by the rules of laying the cables inside the trenches,” said E Srinivasa Chary, executive electrical engineer of GHMC.

Though Chary claimed that in some pockets the situation is gradually changing with the electricity department taking the new wire connections underground, clearing up the entire city of its dangling wires is still a long way away.

Apart from ruining the facade of the city, overhead wires also pose a serious threat to the safety of people as they often snap either due to rough weather or passage of heavy vehicles. With the monsoon season –usually the time when cases of electrocution increase –not too far away, authorities must address this issue on war-footing. #KhabarLive