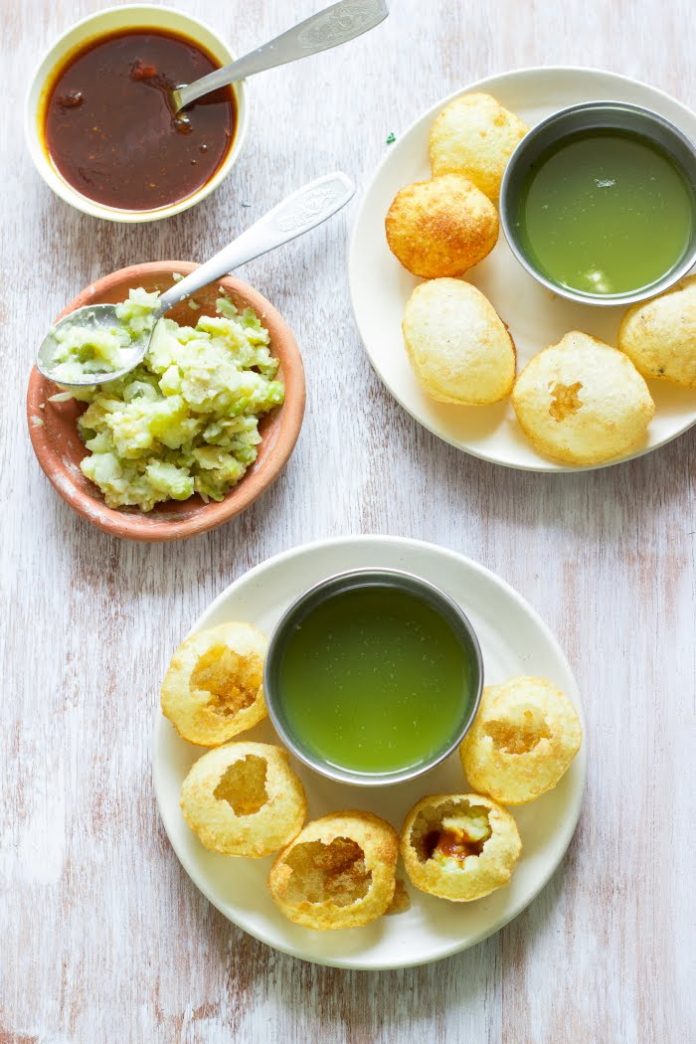 Gol gappa (Gol Gupppa) is the North Indian name of the dish which is widely known as Panipuri. It is also known as gup chup, poochka, phoolki and pani ke bataashe. The gola gappa is one of the most popular of all the Indian street foods other than the chaat. Here’s a guide on Indian street foods.

The dish can be prepared quickly; especially if the crisp semolina and flour mixed puris are ready at hand. The hollow small rounds of puri wait to be filled with masala made of potato, onion, chickpeas, chaat, sprouts, mint and tamarind sauce. For some special golgappas, the filling includes ragda, which gives it a different taste all together.

For the person travelling in India, it is difficult not to come across a street vendor selling golgappas every few minutes, unless they are travelling in some barren land. The delicious taste, easy availability and low cost has made it one of the most desired snack of every season.

The puris are made small enough to fit into the mouth. Once inside the mouth the crispy puris break and give way to the filling to spread around and tickle those taste buds. It is common sight to see people showing the whole masala filled puris into mouth and relishing it one after another on the streets of India. Many of lovers of gol gappa are known to be voracious eaters of the snack. It is a sight in itself to watch the vendor quickly fill the puris one after another and hand it over to the customer one at a time.

ALSO READ:  The Steep Rise Of 'Jagan Reddy' From Businessman To Chief Minister Of Andhra Pradesh

They are also served in platter made out of dried sal leaves after cracking a small hole in the perfectly round puri and filling it with desired masala and tamarind water. Some people prefer sweet golgappas whereas other may love eye watering spicy ones. The catch about eating golgappa is that it should be consumed immediately once filled with water. If not the puris will turn soggy and become leady spilling out the contents inside it. Not only is the preparation of golgappas an art, eating them smartly is great skill in itself.

Often they are washed down with a bowl of spicy or sweetened water which is served by the vendors. It could be made of tamarind, lemon, dates or mint.

It is not an expensive dish and affordable by everyone which has made it so popular that many call it the king of all snacks. It is common sight to see the friends share the golgappa from a single plate which makes them feel bonded together. Most of the youngsters usually hold competition to see who can gulp down most golgappas. This is a delight for the vendor. For some reason it is known to be a favorite snack with girls. One of the reasons could be that unlike boys, girls cannot sit on roadside in a gang, smoke or have fun openly without incurring the wrath of their parents.

The only open get-together for them will be beside a golgappa stall where their parents will not object. In India, mostly the boys ask the girls out to share a golgappa more than sharing a coffee together. Though the dish is known to have originated in Bihar at present it is popular all over India and also in neighbouring countries of Pakistan, Bangladesh and Nepal. One of the varieties of golgappa prepared in Kolkata called Poochka in the local dialect is most famous of the snack.

One of the mythology tale says that, when the Arjuna won over Draupadi in an archery competition beating all his rivals, he proudly told his mother about his victory. His mother Kunti without seeing the woman, said him to share his victory with his brothers which saw that Draupadi had to marry all the five Pandava brothers. Later, Kunti was worried that Draupadi may not do justice to all of her sons; therefore she decided to test her new daughter in law. Giving her just enough dough to prepare one roti, she asked Draupadi to serve the Pandavas. The intelligent woman Draupadi was, prepared five small puris, filled it up with some left over potato dish and served it to the Pandavas. Kunti could see for herself that her daughter in law was not partial to any of the Pandavas, in addition she had come up with a new dish wish was delicious and relished by her sons. This is how Draupadi is known to have won over the hearts of the Pandavas and her Mother in law.

Though earlier the snack was prepared only by golgappa vendors, how people have started preparing in their homes, according to taste. Some people are known to add vodka or whisky to the water when it is prepared at home, though that would be considered an offence if done by street vendor. Once the snack of the poor, golgappas have entered all the expensive restaurants and become a part of fine dining in India. If are not sure if about eating it on the streets, just ask your restaurants if they can make these gol gappas for you. #KhabarLive

How Tawaifs Fell From Grace And Came To Be Known As...

Amidst Protests, Telangana Decided Not To Allow ‘Uranium Mining’ In Nallamala...