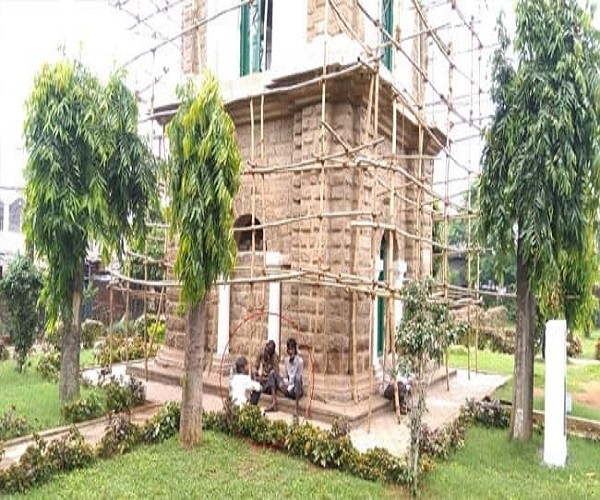 The serious problem surfaced in old city with the anti-social activities at the historical Mahboob Chowk’s clock tower in old city of Hyderabad goes for renovation by the GHMC authorities, the anti-social elements continue to hold sway undermining the importance of structure and providing deterrent to any visitor inside the tower’s compound. At any given time, a group of persons can be found indulging in ganja smoking and many illegal activities.

When #KhabarLive enquired about the activities inside the compound, the gardener acknowledged that some groups of goons and anti social elements of about 10 to 20 persons visit the place regularly on different timings and cause nuisance. Even though policemen check the place twice a day and sometimes catch-hold of them, the problem persists. The workers of GHMC are also facing the problems, during daytime. GHMC Superintendent Engineer, south zone, project department, Dattupant also acknowledged this problem.

He said that despite being renovation works being undertaken by the GHMC, these persons were entering without any hesitation into the premises of tower and not paying any heed to the requests by workers, which is affecting the work there. GHMC workers engaged in the renovation work opined that these activities continue despite of police visits.

As part of conservation and renovation, the Clock Tower of Mahboob Chowk is getting a facelift with an estimated cost of Rs 1 crore. GHMC officials are regularly monitoring the renovation work at the tower, which almost reached completion. “Only touch-ups, plastering, painting, finishing works are yet to completed. The clock of the clock tower is yet to get repaired and the pending works are expected to be completed in a month,” said Dattupant.

He also said that by the separate funds sanctioned by the authorities, the surroundings of the structure will also be cleaned and beautified shortly. Nearly 70 to 80 per cent of the structure has been devitalize and is not fit for the citizens to reside as the building may not stand for long, he said referring to a preliminary study report submitted by Jawaharlal Nehru Technological University to the GHMC.

Mahboob Chowk Clock Tower is a five-storied architectural Turkish style clock tower which was built in 1892 by Nawab Asman Jah Bahadur, Prime Minister of Hyderabad. It is considered to be an important part of Hyderabad architectural heritage and this is located west of the Charminar, near Laad Bazar.

ALSO READ:  Why They Still Languish In 'Gulf Jails' Even After 'Completing Their Term'?

Prior to the works taken up by the GHMC, Deputy Chief Minister, Md Mahmood Ali, MIM MLA, Akbaruddin Owaisi along with higher officials inspected the Clock Tower on March 22.

The law protectors and politicians along with the social activists utterly failed to overcome this issue. This type of activities are many in old xity areas where no law works which hampers the development of the area. Locals are requesting to protect them alongwith the historical structures from these anti-social elements. #KhabarLive