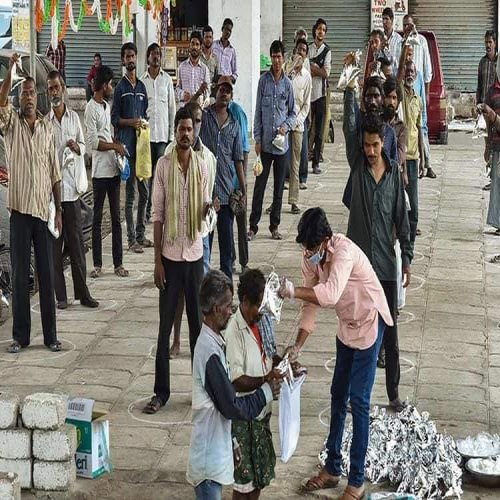 The Greater Hyderabad Municipal Corporation (GHMC) has said it has opened a ”special wing” for collection of food and other items from donors to distribute them in a proper manner as it was observed social distancing was not maintained in events conducted by organisations to give things away during the lockdown.

GHMC Mayor Bonthu Rammohan said it has been observed that people are not maintaining social distance at such distribution giving rise to the chance of spread of coronavirus, according to a Corporation release on Friday.

Stating that people who wished to donate could contact +91- 94931 20244 and +91 – 7093906449, he also said the matter would be viewed seriously if any NGOs or individuals were found distributing food or other items directly.

ALSO READ:  Documented 'Jewels Of Hyderabad's Nizams' In A New Book - 'Treasures Of The Deccan'

In order to avoid public gathering at a particular place, the GHMC has opened a ”centralised special wing” headed by an Additional Commissioner of the civic body to collect food and other items from the donors directly and that the same will be distributed to the needy, the release said.

About 10 mobile vans have also been arranged for this purpose, it said. Rammohan appealed to donors to contact the GHMC and that mobile vans would collect the items and distribute them to the needy in a proper manner.

“If any NGOs or individuals found distributing meal, dry rice or any other items directly to the public, the matter will be viewed seriously and action will be initiated against them,” he added.

During the ongoing lockdown, the state government is providing food and shelter to the homeless and particularly to the migrant daily workers who works at construction sites, hotels and as petty vendors, the release added.

Meanwhile, state Principal Secretary (Municipal Administration and Urban Development) Arvind Kumar said it was noticed on Friday that about 3,000 people gathered at the free distribution undertaken by a private individual at Manikonda in Hyderabad.

Such unorganised gatherings by private individuals and others, however, well-intentioned, work totally against the concept of social distancing and may lead to law and order issues, he said, according to an official release on Friday.

He advised district Collectors that Additional Collectors, handling the affairs of local bodies for each district,be designated as the nodal officer for coordinating distribution of items offered by NGOs and other private institutions.

ALSO READ:  Hyderabadi Lingo Makes You Different From Others, Try Once!

The additional collector shall coordinate with the concerned municipal commissioner and the local police and ensure that distribution of such material takes place strictly in order duly following the norms of social distancing and maintaining law and order, he said.

“The district collector may inform the local SP that action may be initiated against private individuals if they are not routing it through proper channel,” the official said.

The appointment of additional collector as nodal officer should be widely publicised, providing his contact details, so that those desirous of making contributions can contact him easily, he added. #KhabarLive

The New Hunt For ‘Gangs Of Youngsters’ Under Hyderabad ‘Police Scanner’