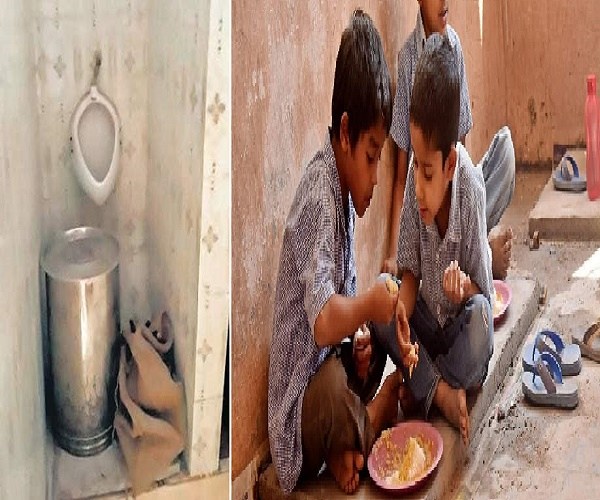 In a shocking incident, a government school in Ravindranagar in Habsiguda was found to be storing food grains, utensils and other utility items for mid-day meal in the toilet of the community hall from where it is operating. While the toilets are being used as a food storage facility, the meal is prepared outside the toilet in a makeshift kitchen.

The issue came to light after Vinod Kumar, IYC, National Coordinator, who went to the school to distribute sweets to the students on the occasion of Rahul Gandhi’s birthday on Wednesday.

Alarmed at the pathetic conditions in which the school was operating, he shot a video and posted it on social media.

The school, as per the video, was seen operating in the passageway of a community hall with students and teachers. There is a makeshift kitchen where a cylinder, stove and a water container were placed a few metres away from where the children sat. The video further showed a big can and some cooking vessels stored in the men’s toilet. A gas cylinder was also there, indicating a huge risk for the children in case of any untoward incident.

“The school caters to children from Gandhi Harijan Basti and there are 32 children who study in the passageway. The school staff are forced to use the toilet to store the material used to prepare food for the students,” Vinod Kumar told #KhabarLive.

Officials from the Department of Women and Child Welfare confirmed that the centre was a primary school. Education department officials were unavailable for comment. #KhabarLive

Do You Know, Facebook Will Become World’s Biggest ‘Virtual Graveyard’ By...