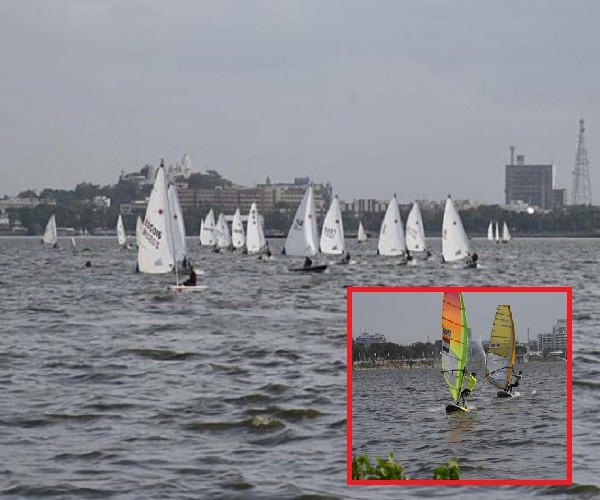 The 400-year-old picturesque Hussain Sagar has been the perfect scenario for the Hyderabad Sailing Week that is underway since two days. This lake is, indeed, nature’s gift to the city.

However, come July, the lake is in full glory. This year, the event assumes importance as it got the accreditation from the Yachting Association of India (YAI). The 33rd edition of the Hyderabad Sailing Week is now rechristened as YAI senior national ranking sailing tournament.

Hosted jointly by EME Sailing Association and Secunderabad Sailing Club, the event has attracted 181 sailors from 15 clubs of the country. For the first time, after many years, there is international jury that has come to conduct the races.

Major General TSA Narayanan, the vice-commodore of EME Sailing Association, was excited that the city sailing event has got the YAI accreditation.

Bayinder was impressed with the facilities available at the centre. “It is an exceptional venue. It is capable of hosting international event. Though the water conditions can be improved, the facilities are very good. The wind blows from 260 degrees and so far, in two days, it is not less than 10 knots and sometimes there is gusting of 20 knots which is ideal for sailing. There are other facilities like a place where one can dock 180 boats. Now, it is all about promoting the event internationally,’’ said the Turkish official.

Lt Col (retd) MP Jaggi, who has rendered yeomen service to sailing as a sport in the city, feels Hyderabad is still best venue as far as the inland sailing competition is concerned in the country. “It is a different type of challenge when you sail here. There is sudden gusting of wind and, at the same time, the wind, at times, drops to five knots. This makes it a very different challenge for the city. But, the lake has the capability to host international events.” #KhabarLive

‘Patangbazi’ A New Craze In Hyderabad During Sankranti