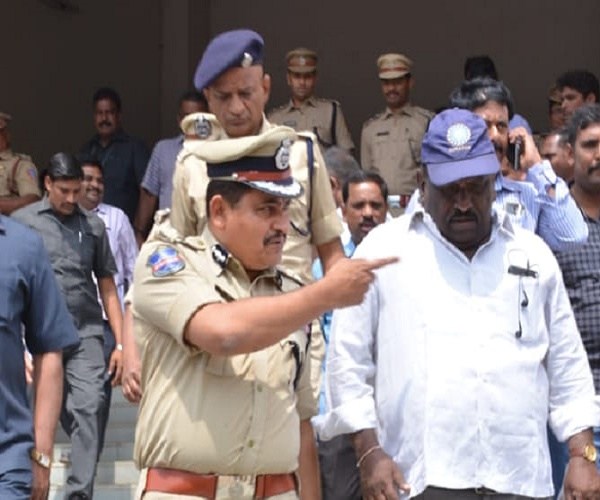 The Rachakonda police in Hyderabad have beefed up security in and around the Uppal stadium ahead of the upcoming cricket match between India and Australia on March 2 amid rising tensions between India and Pakistan at the border. In a statement, Rachakonda Commissioner Mahesh Bhagwat said that several police teams were deployed along with personnel of the elite Organisation for Counter Terrorist Operations (OCTOPUS) force.

“The stadium is under surveillance of 200 CCTV cameras which will be monitored from the joint command and control room at the stadium. Anti-sabotage checks will continue round-the-clock until the match is over. Scanners have been installed at the stadium to detect explosives and prohibited material inside the venue. The bomb disposal team and sniffer dogs have already been pressed into service to ensure safety in the stadium and at parking places. There will be four special mobile technician teams at each gate to check the mobile phones of spectators before allowing them inside,” the commissioner was quoted as saying.

The Commissioner also said that elaborate arrangements were in place to ensure that the road was cleared for the movement of VIPs. Meanwhile, the Hyderabad Metro Rail (HMR) said that it was extending its timings on the day of the match with its last train at 1 am, to ensure an easy commute for the spectators.

The statement by the Rachakonda police came even as the Cyberabad police in Hyderabad beefed up security in parts of the city in view of the rising tensions between India and Pakistan.

Assuring people that all precautions were being taken, Cyberabad Commissioner V C Sajjanar said in a message, “We have alerted all our officers to intensify patrolling, conduct surprise checks, intensify anti sabotage checks etc. We also kept all our force on standby too. Special police pickets have been posted in all sensitive areas. We are coordinating with other forces.”

“All necessary precautionary steps have been put in place. Our force is fully geared. There is no need to panic. Please alert everyone not to believe rumours. Your safety is our concern,” he added.

Large parts of the city’s IT sector which include the offices of several corporate giants come under the jurisdiction of the Cyberabad police.

The conflict between Indian and Pakistan escalated on Wednesday after the Pakistan Air Force violated Indian airspace in Jammu and Kashmir’s Poonch and Nowshera sectors. While Indian officials said that a Pakistani Air Force F-16 fighter jet was shot down in Jammu, Pakistan has claimed to have shot down an IAF aircraft.

The entire series of incidents began earlier this month after a total of 40 CRPF jawans were killed in a deadly terrorist attack in Pulwama district in Jammu and Kashmir on Feburary 14 after a ‘fidayeen’ (suicide) attacker belonging to the Jaish-e-Muhammad (JeM) terror outfit rammed an explosives-laden SUV into the CRPF troopers’ bus. #KhabarLive

The ‘Dirty War’ Of ‘Exploitation’ In Tollywood Films Propoganda