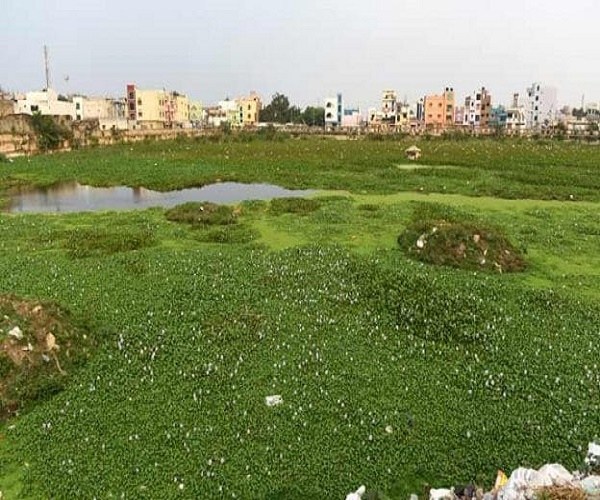 Neglected for decades and taken over by water hyacinth and trash, the centuries-year-old Golconda’s Katora Houz is all set to get a new lease of life and become a tourism spot soon.

With the coordination of Archaeology Survey of India (ASI), Greater Hyderabad Municipal Corporation (GHMC), and Telangana Tourism Development Corporation, work on restoring the lost glory of the historic structure near the Golconda Fort is progressing fast.

Desiltation works have been completed with water hyacinth and trash being cleared from the tank, which was once the source of drinking water for those living in the fort as well as for those in the nearby areas.

Slowly obscured by several residential colonies that came up around it, the water tank had turned into a breeding ground for mosquitoes and gradually, a dumpyard too.

With complaints beginning to come in from various sections over the poor maintenance of the cup-shaped water tank, officials had begun work on restoring the tank late last year.

A Memorandum of Understanding (MoU) would be signed with Telangana Tourism to proceed with further developments like filling up the tank through borewells and providing boating facilities, he said and added that the GHMC would take up plastering of the walls while the fencing works would be done by ASI.

On the other hand, GHMC officials said plans for restoration of the sidewalk and the damaged steps and other necessary activities were afoot.

Local legislator Kausar Mohiuddin, who inspected the tank recently and said the MoU between ASI and Telangana Tourism would be signed soon. “GHMC will take up the works on the ramp and boundaries while Telangana Tourism will work on boating facilities, gardening and other beautification works. We hope to complete the works in a month,” he said. #KhabarLive

All Eyes On ‘First Woman Minister’ In KCR Cabinet Expansion On...