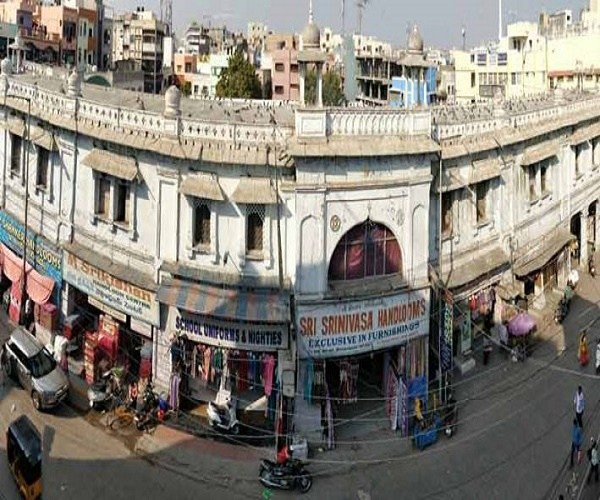 This neglected edifice once, some 160 years ago, was where those raising their voice against the Britishers were put behind bars. Not just locals, but even those from other parts of the country seeking to raise the banner of revolt against the British rule were imprisoned here in Secunderabad.

But, spread over 4,400 square yards in the busy lanes of Monda Market in Secunderabad, ‘Jail Khana’ is now lying in apathy for decades with little of its history known to most in the city.

The 150-year-old structure which once resonated with cries of patriotism now cries for attention and efforts at conservation. Be it the walls that show wear and tear or dilapidated roof or the overall gloom that envelopes it, the erstwhile jail is waiting for immediate repairs.

According to the Old Tenants Jail Association, Secunderabad, which comprise traders operating their businesses in the jail building, so far no authority has initiated restoration works and they had taken up minor repairs on their own whenever required.

Naveen Kumar Goud, president of Old Tenants Jail Association said that they submitted more than 12 memorandums to different authorities, including the Greater Hyderabad Municipal Corporation (GHMC) to renovate and protect the heritage structure, but nothing has worked out so far.

“Our families have been doing business in this complex for more than 75 years and this building has become our second home”, he said.

Repairs required
The heritage structure was built using monolithic granites and limestone and withstood the vagaries of nature – from scorching sun, biting cold to heavy rainfall, for nearly 160 years.

Srinivas Malakther, secretary of the association said the renovations required include plastering, restoring minarets, white washing the structure and repairing roof top of the building to avoid water stagnation.

“It is one of the important heritage structures in the city and we need to protect them and gift to the next generations. For this, an immediate facelift is
needed”, he added.

Recently, the GHMC Zonal Commissioner-Secunderabad, CN Raghu Prasad held a meeting with tenants about the repair works upon the instructions of Principal Secretary (Municipal Administration and Urban Development), Aravind Kumar.

“There may not be much enough renovation works needed for the structure. However, all the irregular name boards on the business establishments will be removed and replace with uniform signage. Toilets will also be constructed in the building”, said Prasad.

Dates back to British era
The heritage structure was built somewhere around 1860 and according to local accounts, served as a civil jail and freedom fighters from Mysore and Maharashtra in pre-Independence India were also imprisoned here by the British rulers.

Later, Jail Khana was turned into commercial complex in 1930 and handed over to Municipal Corporation after formation of Andhra Pradesh. It was declared as heritage structure in 2006 during Secunderabad’s 200 years of celebrations. The structure as per accounts, was built with walls of 24 inches width for safety of the prison as per the then jail norms of British. #KhabarLive

An ‘Eerie Ride’ On Hyderabad’s Empty Roads During Lockdown