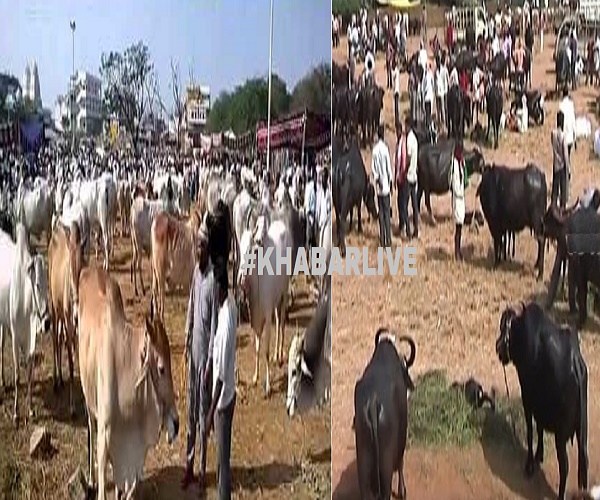 The famous Pebbair Saturday cattle market, popular as ‘Pebbair Santha,’ is not merely a place of buying and selling. It has its roots in hundreds of years of local tradition which was started by the rulers of Wanaparthy Sansthan.

The kings of Wanaparthy, who were natives of Suguru village in the present Pebbair mandal, had built a Kodandarama temple near the Rama Samudram in their village some 400 years ago. Since then, Bolleddula Jatara used to be held every Saturday in the present Venkatapur village of Pebbair mandal. ‘Bolleddulu’ is a breed of bulls which are black in colour with grey patches. The breed still exists. 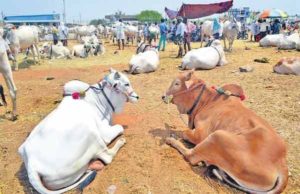 At the same time, Srirangapur jatara near Ranga Samudram was also famous back then, where vegetables and fruits used to be sold. At Kishtareddipeta jatara in the present Pebbair mandal, spices and other food items used to be sold.

More than two decades ago, when the water reached Pebbair area after Jurala project was constructed, a decision was taken to merge the three jataras and conduct it at Kishtareddipeta, where it is being held ever since.

From hairpin to iron tools, farm equipment and four-wheeler; from cows, buffaloes, bulls, goats, sheep, mares, country hen, monster lizards to donkey’s milk; from vegetables to fruits, spices, millets, pulses, pottery and even clothes are sold throughout the day every Saturday, making it the biggest weekly market in the erstwhile AP.

Due to the immense popularity of the market across the country, farmers and traders from not only Palamuru region but also from Karnataka, Maharashtra, Kerala and Rajasthan come here to purchase cattle.

Golden goose
Being the biggest market, selling everything that a farmer or a household needs — all at one place, the turnover of Pebbair Santha runs into a few crores of rupees every week. It is not just hundreds of sellers who sell their products here from across erstwhile Mahabubnagar district.

The people of Pebbair mandal headquarters who run various retail outlets, including hawkers, do good business every Saturday when over a lakh buyers and sellers converge at this market, which used to be spread in 32 acres of temple land (Venugopala Swamy Maanyalu) in Kishtareddipeta. This place has now been merged with the newly formed Pebbair municipality.

For the past decade, the market has been under the control of two brothers from a single family, who have been conducting the Saturday market every week. Every year, they get the contract through tenders called for in a non-transparent manner. This year, local youth objected to the way tenders were being called for and demanded that an online tender system be implemented.

However, it could not be done and even this year’s tender went to the lucky brothers two weeks ago. The highest quote for the tender was Rs 3 crore, which goes to the nagar panchayat (now municipality). 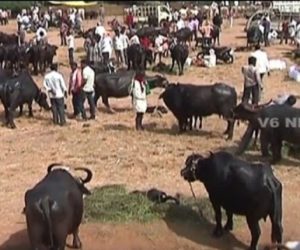 However, recovering such a large sum may not have seemed easy for the contractors, so they, including their henchmen, have been literally fleecing buyers, sellers, stall owners, hawkers and others.

Whether a farmer wants to sell a hen or a bull, he/she has to shed money. To sell a hen, the charge is Rs 10, for sheep or goat it is Rs 50 and for cow it is anywhere between Rs 2,500-5,000, depending on the price a buyer gets for selling the animal.

For example, if a farmer wants to sell his bull, 5 per cent of the sale amount needs to be given to the contractors. It is Rs 50-100 for an auto to enter the market, Rs 100 for Tata Ace, Rs 200 for Bolero and Rs 500 for a lorry. Containers can enter by paying Rs 1,000. Even small stall owners have to shed Rs 50 for operating their small shops for that day. Due to this, sellers who are mostly from economically-backward backgrounds are suffering.

However, this rule doesn’t apply to those farmers selling their cattle to traders from slaughterhouses in Kerala, Maharashtra, Hyderabad and Rajasthan, who have an arrangement with the market that they will bear the market charge so that farmers are encouraged to sell in bulk. These traders come with their lorries and containers to purchase cattle from Pebbair Santha.

According to reliable sources, cows are brought to this market at night by farmers who starve the animals for a few days so that the cows can be marked-off as unhealthy. Then, after the market arranges certificates for the sick animals (even forging certificates), the cows, including their calves, are sold away in bulk. Ordinary farmers who want to sell their cattle to genuine farmers are getting discouraged by the day. Due to this, the newly started Wanaparthy Santha in Rajanagaram is slowly gaining popularity.

Encroachment of temple land
What used to be 32 acres of Venugopala Swamy temple land has been reduced to mere 16 acres due to encroachment by the influential in Pebbair.

Possible solution
There are several ways to reduce the burden on sellers and small retailers and at the same time protecting the temple land and conducting the Saturday market in a fair manner.

Srinivas, a businessman from Pebbair, tells #KhabarLive that Guduru cattle market in Rayalaseema is well-regulated and a predetermined charge would be collected from the seller at the entrance of the market. Moreover, the market has a compound. He tells that the online tender system is necessary to avoid the abuse of a dubious tender system.

He also suggests that convincing the Endowments Department and entering into a 99-year lease with an agreement for a set amount of rent per year would help in protecting the temple land, as a compound wall could be constructed where the market exists.

In short, only with a free and fair way of trading, the market can retain its popularity, without which people would automatically be driven to other smaller markets in Telangana or markets like Guduru in Rayalaseema, feel many. #KhabarLive

‘Blossoming’ Trees Are A True Spring Delight In ‘Flowering’ Telangana