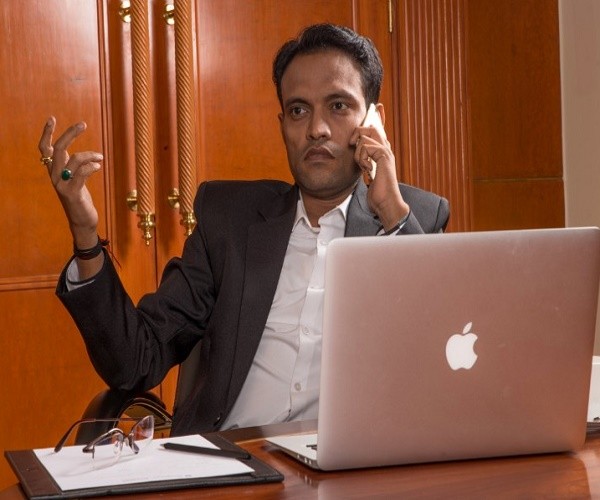 Amit Bhardwaj is alleged to have fled to Dubai after conning scores out of an estimated Rs 2,000 crore through a Ponzi scheme based on bitcoins. He is the son of a former government employee from Shalimar Bagh who now owns a house in Dubai’s ultra-upmarket Burj Khalifa. But this is not some grand story of a middle-class man hitting the big time. It’s quite something else altogether.

Amit Bhardwaj, a former software developer with Infosys and stock broker, is alleged to have fled to Dubai after conning scores of people out of an estimated Rs 2,000 crore through a Ponzi scheme based on bitcoins, the largely unregulated digital ‘cryptocurrency’ that has been making headlines with its sharp spike in value.

Bhardwaj, whose businesses are reported to have a turnover of millions, now faces fraud cases in several states, with investigative agencies struggling to get him back to the country.

Under Bhardwaj’s scheme, an investor purchasing one bitcoin was promised 10 per cent of its value each month for the subsequent year and a half. This means that by the end of the 18-month period, an investor was supposed to get back almost double the value invested.

All transactions happened in bitcoins through Bitex, a bank vault for the currency. As a result, there was no involvement of the Indian currency and hence no tax liabilities.

There were additional incentives for investors who got more people to sign up. “Bhardwaj floated a multi-level marketing (MLM) scheme, where he lured investors with referral incentives to rope in more people to put their money,” deputy commissioner of police Bhisham Singh of the Delhi Police crime branch said.

In an MLM scheme, each person enrolled has to get on board a specific number of people to invest, which earns them a commission.

“The incentive would eventually add up to an investor’s returns in their account,” Singh said of Bhardwaj’s scheme.

“To lure investors, his companies hosted seminars in five-star hotels and even invited celebrities. At the seminars, the concept of bitcoins was explained, as was how an investor could make money by investing in GainBitcoin,” Singh added.

Bhardwaj’s scheme offered returns in three forms: A monthly return of 10 per cent on their investment for 18 months; a one-time payment for roping in more people to invest; and a mining income.

However, what was promised was allegedly not given. As bitcoin prices witnessed a massive spike, entailing enormous returns for investors, Bhardwaj allegedly went rogue.

“As bitcoins became popular and their value spiked, he had to return 10 times what he was given, so he stopped giving the payback and duped several investors,” a police officer said.

Each time a bitcoin transaction is made, it is reflected to customers through a mobile-phone-application-based e-wallet. The app allows one to monitor their bitcoin balance, its current value in the market and other transaction details. One can also sell or purchase bitcoins through the wallet.

The investors are said to have realised something was amiss when the promised returns never reflected in their e-wallets.

“Though Bhardwaj’s company claimed to have transferred the bitcoins, it was never reflected in the investors’ wallets,” a police officer said. “It was later discovered that the transfers never happened, and that hundreds of people had been duped of crores of rupees.”

“Through the Ponzi scheme, he earned crores and bought several properties in India and abroad,” another police officer said.

Once they realised they had been taken for a ride, Bhardwaj’s investors started filing complaints with the police and began a petition on change.org seeking his arrest.

Bhardwaj has allegedly duped investors from Delhi, Pune, Nanded, Mumbai and Kolhapur. While one case has been registered at Prashant Vihar in Delhi, several others have been submitted to the Delhi Police crime branch.

Last year, Maharashtra Police roped in the Enforcement Directorate to probe the alleged Rs 2,000 crore fraud. A lookout notice has since been issued against Bhardwaj, who is yet to be declared a proclaimed offender in most cases.

Bhardwaj is a computer science graduate from Mahatma Gandhi Mission College of Engineering in Nanded, Maharashtra. He is reportedly in his late 30s.

According to sources, Bhardwaj’s father was an employee in the finance ministry, which is how he first developed an interest in economics. He worked with Infosys for a while before becoming a stock broker.

Eventually, he turned to bitcoin mining, becoming one of the few early players in the cryptocurrency market offering genuine bitcoins. At present, Bhardwaj owns a chain of cryptocurrency operations that deal with the mining and processing of bitcoins, some of the products offered being GainBitcoin, GBMiners and, the most recent, MCAP.

As bitcoins rose in popularity, Bhardwaj was invited for several talk shows on news channels and seminars as an expert to explain what cryptocurrencies were, how they worked and how they were mined.

While most businessmen deal in the sale and purchase of bitcoin, Bhardwaj’s company claimed to mine the crytocurrency, a process through which new bitcoins are brought into circulation. Cloud mining is a method of bitcoin mining, and requires massive infrastructure and power.

GainBitcoin claims that its bitcoin-mining farms are in China and investors from across the world can use the hardware without having to maintain it. GainBitcoin claimed to have bought the mining machine with the money they got from investors.

Another company, GBMiners (GainBitcoin Miners), located in Hong Kong, claims to be the first bitcoin-mining pool from India. A mining pool is a group of miners pooling their resources and sharing the rewards. #KhabarLive

Chor Bazaar, Weekly Bazaar Or ‘Jumeraat Bazaar’ – Everything Is Cheap...