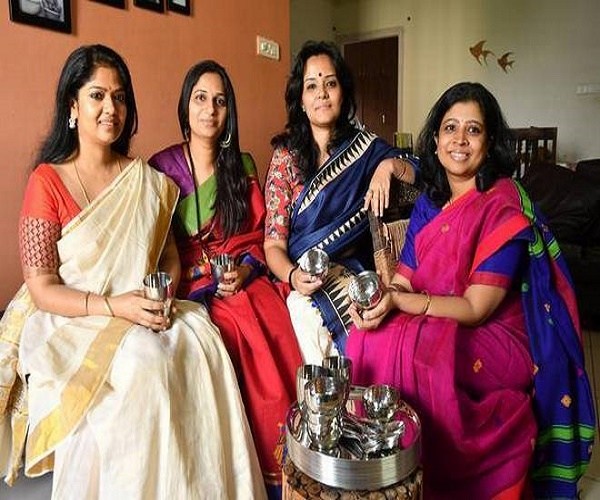 For events that have 100-plus guests, they use biodegradable plates and cutlery, and set up an on-site composting unit. In about three months, the compost is ready to be used in the gardens of the host and their friends.

“I was going through a phase where I was eager to do something that would make a social impact,” says Nidarshana Saikia Das, looking back at what led her to begin The Bartan Company (TBC), which she now manages with three other like-minded young mothers.

TBC makes small and mid-sized gatherings a little more ecologically responsible by renting out steel utensils and biodegradable cutlery, thus reducing plastic waste. TBC is more than a cutlery bank. For events that have 100-plus guests, they use biodegradable plates and cutlery, and set up an on-site composting unit. In about three months, the compost is ready to be used in the gardens of the host and their friends.

Nidarshana was a marketing professional and quit her steady job in August 2018. The turning point was signing up for a permaculture course with Aranya Agricultural Alternatives (AAA) in Zaheerabad. She tried to put to use what she had learnt, in an urban farm nearby. Yet, something gnawed at her. “All I saw around me was [bad] waste [management]. I stopped enjoying parties because I would see the pile of disposable plastic waste at the end of it,” she laments.

At the same time, she learnt that there were a handful of cutlery banks across India that said no to plastic disposables. She decided to float a community utensils bank in Hyderabad to curb plastic waste and promote community composting.

Where she resides at Nallagandla, she shared her thoughts on a Whatsapp group. A flurry of encouraging emoticons followed; but little else happened. Then gradually, things began to fall in place. She remembers how a member of Waste Ventures India came forward to help financially and others followed suit. Bintix Waste Research Private limited, and MNC employee Balaji Rao pledged to sponsor the first tranche.

IT professional Madhumita Subramaniam joined Nidarshana as partner and The Bartan Company came into effect in February 2019. Madhumita refers to a personal experience when she felt the need for such a cutlery bank, while hosting gatherings at her house. She was determined not to use plastic disposables. “When Nidarshana floated the idea, I was game. Today, with TBC having helped host so many events, we can see a change in people’s mindsets,” she says. Madhumita is a software professional who lends a helping hand to TBC.

The duo realised that convenience (of using disposables that don’t involve cleaning) and affordable cost would be the driving factors to entice more people to use TBC’s services. Nidarshana and Madhumita reached out to gated communities in their vicinity and were met with warm response from residents who were inclined towards sustainable living.

Sushoma Nagaraj who dabbles with chemical-free cosmetics and Reena George who traded her banking career for yoga and wellness, joined them. TBC helped each one of them rediscover themselves on a green journey. The smaller events hosted at homes, with 25 to 50 guests, were easier to handle. The bigger ones, with more than 100 guests, made them rethink their initial idea of using only steel. “It isn’t truly eco-friendly if you consider the amount of water that goes into washing all the utensils and plates. The maids needed to devote a lot more time as well. That’s when we introduced biodegradable leaf plates with a condition that we will do on-site composting. It didn’t make sense to use biodegradable alternatives if we were going to send them as wet waste to landfills,” explains Nidarshana.

At a gathering, they observed that the most enthusiastic response for do-it-yourself composting came from children who had learnt about it in school. They dropped the plates in the bin and added a scoop of composting material. The elders followed.

Nidarshana put her marketing skills to use by spreading the word about TBC on social media and making their concept “sound cool and not preachy.”

Currently, TBC supplies vessels and cutlery to home parties at Gachibowli, Nallagandla and other nearby areas. For other parts of the city, they prefer the organisers collecting and then returning the vessels. TBC sends a staff member to help with the cleaning. #KhabarLive