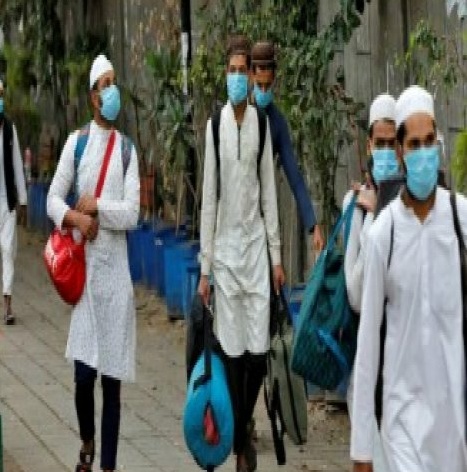 The ruling Bharatiya Janata Party’s (BJP) relentless campaign against India’s 140 million Muslims, and a lack of transparency on the part of the Aam Aadmi Party (AAP)-run Delhi government, is compromising India’s attempts at containing the novel coronavirus, members of the community say.

On Friday, 3 April, surveyors from Delhi’s health department were chased out of the city’s Nizamuddin neighbourhood after the surveyors couldn’t prove they were in fact sent by the state government. The first four questions on the Delhi government’s health survey form ― what is the name of the head of the household, the house address, the mobile number and how many people live in the household ― alarmed the residents.

Residents said they feared that data gathered by the surveyors would find its way to the National Register of Citizens (NRC) — which in turn could be used to render thousands of citizens stateless.

The few forms the surveyors had managed to fill were torn up by the residents.

The fears are not as far-fetched as they sound: As recently as February this year, the BJP made Islamophobia a centrepiece of the party’s election campaign in Delhi, and senior BJP members including Home Minister Amit Shah have telegraphed mixed messages by first promising to create a nation-wide NRC, only to subsequently disavow their claims.

Nizamuddin has been on edge since it was declared a coronavirus hotspot, after hundreds of cases of COVID-19 across the country were traced to a large congregation organised in the neighbourhood by the Tablighi Jamaat religious order.

The subsequent outpouring of explicit anti-Muslim hate on social media and television channels, and from members of the BJP, has set up a vicious cycle where the hate campaign has made an already marginalised community wary of state authorities, making it harder to tackle the virus, which in turn prompts more Muslim demonisation and Islamophobia.

“The atmosphere till just a few weeks ago was so hateful and toxic. We are still haunted by the NRC-NPR. This being a Muslim locality, we were alarmed when they started asking these personal questions,” said Sheikh Ghulam Jeelani, a social activist and resident of Nizamuddin who spoke with the surveyors.

Jeelani was referring to the NRC as well as the National Population Register (NPR), a list of residents which the Narendra Modi government was going to start updating in April, but postponed following the outbreak of the coronavirus. The NPR is regarded by its critics as a first step towards the NRC.

On their first visit the surveyors had no identity cards, and no authorisation letter from the Delhi government, Jeelani said.

“We thought this health survey was a sly way of doing NPR,” he said.

The atmosphere till just a few weeks ago was so hateful and toxic. We are still haunted by the NRC-NPR.

Vinod Yadav, the sub-divisional magistrate (SDM) in Defence Colony, who is also responsible for Nizamuddin, told #KhabarLive that the survey had been authorised by Harleen Kaur, the deputy-commissioner of south-east Delhi as part of a “containment plan.”

Yadav said that he could not say how many people or households are being surveyed in Nizamuddin. He also couldn’t explain exactly how all this information would be used. Delhi Chief Minister Arvind Kejriwal has stated that his government and the Delhi Police are tracking the real-time locations of the cellphones of thousands home-quarantined individuals to ensure they do not step out of their homes. On Monday, 6 April, The Indian Express reported that the Delhi Police had filed First Information Reports (FIRs) against 176 individuals based on their cell phone location history.

“The numbers are required for tracing a person if he subsequently develops symptoms,” Yadav said. “The medical staff is really overstretched. The doctors can call them and ask them about their health. There is no other purpose.”

The total number of coronavirus cases in India has crossed 4,000 after nearly 700 new infections were reported in past 24 hours, and the death toll has gone up to 109, according to the Health Ministry.

Jashodhara Dasgupta, a public health expert, said it was incumbent upon the Delhi government to recognise how events like the passage of a discriminatory law like the Citizenship Amendment Act (CAA), the NRC, and the Delhi riots, have traumatised the Muslim community and eroded their trust in government institutions.

“The Delhi government acted as if this was context neutral situation, which is a mistake,” said Dasgupta, who runs Sahayog, a Lucknow-based volunteer organisation that focuses on women’s health.

“In a post-riot scenario in Delhi, the Muslims don’t trust the government or the police or the health system. Suddenly, you march in and say that you are responsible for spreading the virus, and then you start an invasive survey in the community,” she said. “Public health can’t just go in like a bulldozer and say you have to submit and obey. That unfortunately is the tone being taken.”

Mohammed Rafiq was cooking in the small room that he rents in Nizamuddin, when three women wearing gloves and masks approached him and asked him to take a health survey which they said would help them fight the coronavirus pandemic in India.

“They asked, ‘how are you feeling? How many people are living here? Is anyone coughing? Does anyone have a problem breathing?’ They asked for my name, building number and contact number, so I gave it,” said Rafiq.

“I don’t know who they were or whether they were doctors. I’m just a labourer. I did not think to ask all this,” he said. “I’m trying to think. I can’t remember if they were from the BJP (Bharatiya Janata Party) or (Delhi Chief Minister Arvind) Kejriwal had sent them. I really couldn’t tell.”

I don’t know who they were or whether they were doctors. I’m just a labourer. I did not think to ask all this.

The residents of Nizamuddin that HuffPost India spoke with said that when they sought to question the surveyors on Friday, most of them ran away.

They managed to get hold of one man, Mohammed Rafi, who told them that he worked for the Aga Khan Foundation, a highly respected private trust and non profit that is engaged in a host of developmental and cultural works in many countries.

Bilal Khan, a lawyer and resident of Nizamuddin, said, “We asked for an authorisation letter from Delhi government to the Aga Khan Foundation to carry out the health survey, but they did not have one.”

The angry and deeply suspicious residents made Rafi write out a statement that he worked for the Aga Khan Foundation, and recorded a video expressing their fears about whether the health survey was a surreptitious way of carrying out the NPR.

Workers from the Aga Khan Foundation, Yadav, the SDM, told #KhabarLive, were asked to help carry out the survey in the mostly Muslim neighbourhood.

Speaking with #KhabarLive, Rafi said that he was a grassroots worker with the foundation, and he was so scarred by the hostility and anger levelled at him Friday that he had decided not to help with the survey anymore.

When #KhabarLive reached out to Fehmina, the woman whose name and number was written as the ‘team member’ who had surveyed Rafiq, the labourer, she refused to say whom she represented and asked not to be contacted again.

Their worries deepened, residents said, when they called the landline number on the form of the “Public Health Department -IV” and were told no teams had been dispatched.

Earlier that day, an audio recording made by the Aam Aadmi Party (AAP) lawmaker from Jangpura, Praveen Kumar, which said that Delhi Health Minister Satyendra Jain had dispatched “one medical team” to speak with residents of Nizamuddin basti and give them suggestions so there would not be a single case of coronavirus in the neighbourhood.

“I request you to speak with our medical team,” Kumar says in the message.

Rafi as well as some of the other surveyors who had fled, the residents concluded, were not doctors, and MLA Kumar’s message said nothing about a form in which they would have to provide their personal details.

Their confusion deepened, residents said, when they phoned Kumar to check whether the Delhi government had dispatched a team of 20 to 25 surveyors, and his PA (personal assistant) said no.

“It was total chaos. No one could tell us anything about this survey. We could only imagine the worse,” said Jeelani.

No one could tell us anything about this survey. We could only imagine the worse.

On Sunday, residents said, the surveyors were back and this time they were accompanied with doctors and police personnel. They showed the suspicious residents a letter signed by Kaur, deputy-commissioner of south-east Delhi, which said a team from the health department was carrying out a survey to stop coronavirus and appealed for people to cooperate.

The residents, who are still wary of the survey, told #KhabarLive that they had appealed to surveyors not to fill out the forms with their personal details.

“There is a very strong communal rhetoric being used by people in power and people allied to the current regime. Public health has to respect the context of what interactions have gone before this,” said Dasgupta.

“The Delhi government should have reached out to the opinion leaders and persuaded them that in order to avoid further vilification people should voluntarily participate in a survey which is only for public health purposes. It is neither NRC nor NPR in disguise,” she said.

Yadav, the SDM, said the Delhi government had roped in local politicians to help promote the survey.

“There are doctors and health workers in the team, but some people had doubts, so we are taking political leaders as well. We are trying to build faith that we are working for public safety,” he said. #KhabarLive

Do ‘Indian Patients’ Even Know Their Medical Rights At Hospitals?