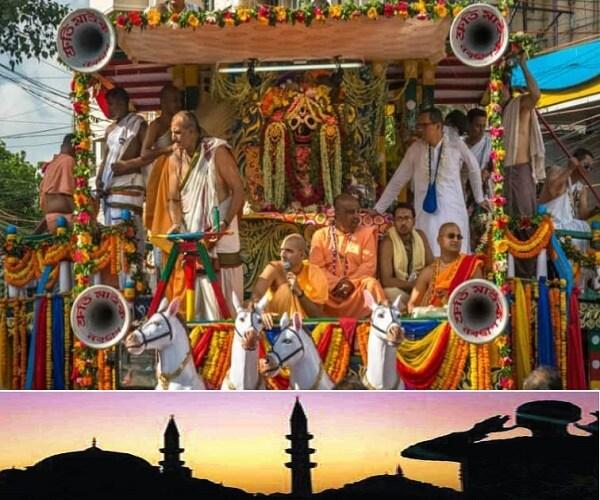 In India, both the freedom to practice religion and the right against noise pollution are protected by the Constitution, and no Indian citizen are allowed to violate this law.

While traveling to my hometown in July, I got stuck in a massive traffic jam caused by kanwariya — the devotees of the god Shiva. Not only did the yatra (religious journey) cause gridlock and trouble for the general public, but the devotees were playing loud music on stereos powered by massive generators placed on trucks. – The scene reminded me of the singer Sonu Nigam taking to Twitter to criticize the noise of the adhan near his house in the early morning. Some other Bollywood celebrities later joined the bandwagon and criticized the use of loudspeakers for the Muslim call to prayer that is given five times a day and can be disturbing for people living in close proximity to a mosque.

Although the comments made by Nigam drew flak on social media, and a case was filed against him under sections 153A and 295A of the Indian Penal Code, the singer has managed to raise some pertinent questions such as: To what extent should the practice of religion be allowed in public spaces in India? Does the public have any right against the discomfort caused by loudspeakers used during yatras, the adhan, religious processions and other religious events? Is the freedom to practice religion so absolute that it can justify violating one’s comfort even inside his/her own home?

The Indian government can be blamed for religiously charging the political scenario in India and giving a communal twist to problems facing society. The noise pollution issue has also taken an ugly turn with a fight between Muslims using microphones for the adhan versus Hindus using DJs and loudspeakers during yatra.

For example, in August month, Yogi Adityanath, the chief minister of Uttar Pradesh, when asked about the use of loudspeakers, sound systems and DJs during Kanwar Yatra, stated: “I told the officers to ensure that mics are banned and no sound emanated from the places of worship. I asked them if it would be possible to implement this. If not, then it can’t be applied here also. Yatra should go on as it is.” With regard to the noise pollution caused during the yatra, he further stated: “I asked if this was a Kanwar Yatra or a funeral procession. If they don’t play music and drums, don’t dance and sing, don’t use the mic, how it will be a Kanwar Yatra.”

Unfortunately, the chief minister of the most populous state of India did not even consider playing loud music during yatra or using loudspeakers for the adhan as an issue pertaining to noise pollution; he rather perceived it as a question of practicing religion by Muslims and Hindus. He said, “If I am not able to stop people from performing namaz [prayer] or Eid on roads, then I don’t have the right to stop celebration of the festival of Janmashtmi in police stations.”

The Constitution of India, under Article 25, grants to all persons the right to freedom of conscience and the right freely to profess, practice and propagate religion. Moreover, the Indian state has a secular one ever since its inception — notwithstanding the fact that the term secularism was added later by the 42nd Amendment to the Constitution.

The right to freedom of religion is perhaps the most misused right in India because people wrongly conceive it as a certificate to practice their religions on roads, in markets, parks and other public places. Speaking in legal terms, people forget that the right to a clean environment, including the right against noise pollution, is written into Article 21 of the Constitution by the Supreme Court, and that they are violating other people’s right by practicing their own freedom of religion.

The Supreme Court of India, in Church of God (Full Gospel) in India v. K.K.R. Majestic Colony Welfare Association, while answering the question whether the beating of drums and reciting of prayers on amplifiers should be allowed on the basis of religion, categorically stated that the rights of the individuals must exist in harmony with each other, and enjoyment of one’s rights must be consistent with the enjoyment of rights by others. The court held that no religion requires that prayers are performed through voice amplifiers or by beating of drums. If there is such practice, it should not adversely affect the rights of others, including that of being not disturbed in their activities.

In August, the Madras High Court observed that freedom of religion guaranteed under the Constitution of India cannot be interfered, but the Supreme Court guidelines on sound systems used by mosques for giving prayer calls should be followed. Moreover, playing music, using sound amplifiers, beating drums, tom-toms or blowing a horn or a trumpet is considered as an offence and is penalized under the Noise Pollution (Regulation and Control) Rules, 2000 and the Environmental Protection Act, 1986.

Indian society has been so divided on communal lines that a citizen’s fair outcry against a wrongdoing is considered as derogatory to a particular religion, and he/she is accused of insulting the religious feelings of a particular class. This has happened because the ruling party and its leaders have been successful in linking up even the most trivial issue, for example, the “love jihad” — a synonym for Hindu-Muslim marriage — to religion.

In this scenario, as citizens of India, it is our utmost duty to learn not to transgress our limits and not to overemphasize the freedom to practice religion, especially in public places, because by doing so we are often either violating another person’s rights or breaching the law. Be it the adhan or yatra, the noise pollution rules and the Supreme Court directives must be abided by all citizens as well as authorities irrespective of all religions. #KhabarLive