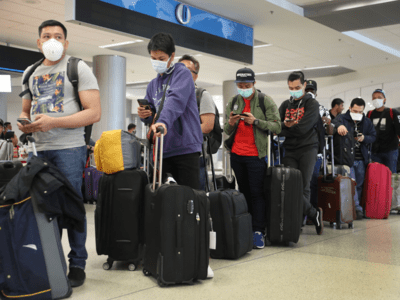 Several migrant labourers working in the Middle East countries hail from the erstwhile districts of Karimnagar and Nizamabad, and travel frequently each month. Recently, a Rapid Response Team, comprising doctors and mandal-level health workers, visited Suresh, a 25-year-old man in a village in Banswada mandal in Telangana.

The District Surveillance officials had alerted the Rapid Response Team about Suresh’s arrival as he had recently returned from Dubai to attend his father’s funeral. Though Suresh, a migrant worker in Dubai, was asymptomatic, he was advised to remain in isolation for 14 days, and was also asked to keep in touch with medical professionals.

With a rising number of COVID-19 cases being reported in India and around the world, there are also concerns that the number of cases could increase due to the movement of migrant labourers from countries in the Gulf.

It has also been estimated that at least 10,000 people from Telangana alone move between the state and Gulf countries every year through Hyderabad’s international airport. Migrant labourers work in countries such as Saudi Arabia, United Arab Emirates (UAE), Oman, Qatar, Bahrain and Kuwait.

Currently, Bahrain has reported over 200 cases, about 400 in Qatar, 118 in Saudi Arabia, 112 in Kuwait and 98 in the UAE. Travel restrictions have also been put in place in Qatar, Saudi Arabia and Kuwait, which have suspended major operations at its airport.

Since three people have been tested positive for the COVID-19 virus in Telangana, the Telangana government is bracing itself for a greater spread.

Telangana Health Department officials have begun screening all international passengers arriving at Rajiv Gandhi International Airport in Hyderabad. If they are asymptomatic, their contact details are collected at the airport and sent to the district health officials concerned, who in turn, will alert local teams to keep the passenger under observation.

ALSO READ:  'Golkonda Fort - Our Heritage And Our Identity'

Speaking to #KhabarLive, Kamareddy District Medical and Health Officer (DMHO), P Chandrashekar said, “While the mandal-level health officers are creating awareness among people about coronavirus, migrant labourers coming from the Gulf countries are being put under observation as per the standard protocol.”

If passengers are found completely asymptomatic in the first level of screening at the Hyderabad airport, they are allowed to go to their native. “The details of the person will be communicated to district authorities to keep the passenger under for further observation,” he added.

According to the DMHO, district surveillance teams have so far visited at least three persons who have come from the Gulf countries.

“Medical staff members visit the persons as per a list that is prepared by the district administration. If the person develops any symptoms, we will take them to the district hospital, where he/she will be kept in the isolation ward for further examination. If there are no symptoms, we direct them to be home-quarantined for 15 to 20 days,” explained Chandrashekar.

According to Nizamabad DMHO Dr Sudarshanam, “Two persons who recently came from Dubai complained of certain symptoms. However, they tested negative. We urge people to avoid attending gatherings and keep themselves sanitised.”

“All ASHA (community health) workers and local medical staff have been trained. We are pushing to enforce all standard measures,” he added.

Dr Sujatha, DMHO Karimnagar, said, “An intensive campaign is also being carried out in coordination with local officials. We are urging people not to spread rumours and unverified information, which could create panic among people, especially among the uneducated.” #KhabarLive