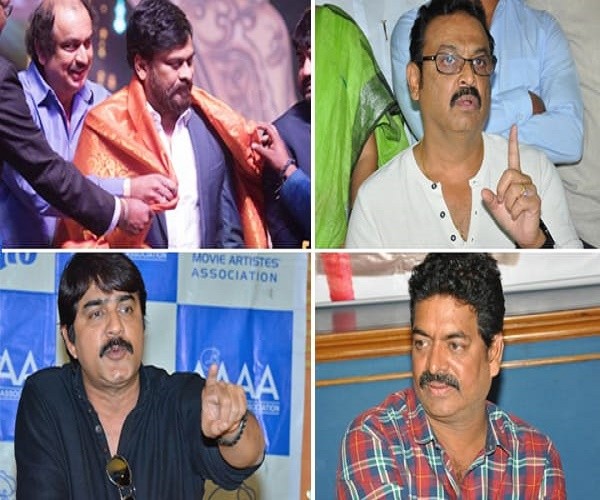 #KhabarLive did fact finding about the MAA silver jubilee event in Dallas, it’s financials, about the event managers’ scams, money makers in the whole episode, and the losers. In addition, we covered how media leaks have been planted in light of upcoming ‘MAA elections’ – All this exclusive inside news in Q & A format for you.

Is there “funds misappropriation in MAA” as alleged by Mr. Naresh?

No, technically this is an open-and-shut case. MAA and Shri Tirumala productions entered into an agreement related to the Dallas event for a fund of 1 Crore rupees to MAA. As per contract, Shri Tirumala productions has already paid 1 crore to MAA. This amount of One Crore was agreeable to even Mr. Naresh, Mr. Chiranjeevi and everyone in MAA at the time of contract – which everyone signed unanimously. Another issue raised in yesterday’s pressmeet related to business class tickets to the stars and 5-star hotel expenses in USA has no stand either. Those expenses were taken care by USA organizers and no burden on MAA.

Is there a kickback or Quid Pro Quo involved?

Yes, our reliable inside sources reveal ‘some’ quid pro quo amount, many special benefits have been given to the persons (of MAA) who made this happen. However, the payments are not at abnormal levels they suggest. Involved parties, public can argue both sides of it – fact is independently unverifiable by #KhabarLive in this context

Are the allegations about cricket match in Dallas true ?

Yes , MAA members played a cricket match in Dallas , from which an amount of $30K ( 20 lakhs INR ) was collected. The amount was not deposited to MAA funds.

What should have been done by MAA to get more funds?

When in planning phase, in early 2018, MAA should have released a media note to NRIs seeking bids (for funds) to organize such a large-scale event in USA with so many stars including the Megastar. Then MAA would have got way higher than 1 Crore funds from reputed organizers. Local organizers eventually would have lost some money which is not MAA’s headache, but from MAA perspective they would have got 3 crores and above bids for two events combined.

What is the recommended course for remaining MAA USA events?

If at all near future planned MAA event in New Jersey (Maheshbabu as chief guest) is still on, MAA should call for open competition bidding from reputed Telugu or Bollywood event organizers in USA

Why this controversy flared up now? Who started?

The Dallas event in question occurred back in April 2018, contracts were signed even before April.  Naresh camp were clearly aware of the terms and conditions then itself and were okay with it because organizing the second MAA event in New Jersey (Mahesh as chief guest) was promised to them. Now it appears, Mahesh babu is not willing to participate as promised earlier for various reasons. Now the above said camp want this event to be cancelled it, best route is to create a mess around it and they raised a controversy through an english newspaper in August last week. Then citing the media reports, MAA groups called for internal executive meetings and we have seen those subsequent controversy, pressmeets in last two days. Second reason cited is upcoming MAA election, old feuds resurfaced.

What is the background of MAA silver jubilee Dallas event organizers? How the event ended financially?

Shri Tirumala productions was incorporated in India on January 10th 2018 as Nikhil Nanchari, Devanna Kurmeedla as directors. Mr. Nikhil Nanchari is based out of India/Dubai and distributed small budget films like Vangaveeti, Guntur Talkies like in USA before venturing into event management very recently. They had registered event management companies in India, Dubai and UK.

It is amusing that how MAA (Movie Artists Association) had contracted rights to an inexperienced, first timers for such a prestigious event. That misstep has resulted in very poor organization of Dallas event, which had ended up with a dismal attendance of audience. Having megastar and 30 other key personalities from Tollywood in the event, they could not able to sell for atleast 1000 paid tickets, including free tickets the venue had around 2,000 attendance on the main event day. ‘Tirumala productions’ and ‘Film star events’ had resold the Dallas event rights to 5 to 6 non-Dallas residents of USA, Canada.

Allen Event Centre Dallas, TX rental, other fees costed them $70K, Sound, lights and decor costed another $60K Plus. Hotel and food expenses for more than 50 members is addition. Thus, local organizing cost of the event exceeded $150K. Plus, whatever price third party organizers paid to Tirumala productions or ‘Film Star Events ‘as rights – was entirely lost as ticket sales were dismal. Adding salt to the wounds, Chiranjeevi meet and greet banquet was another damp squib financially. Only a little sponsership money had left with the last line of organizers. The transactions involved between Tirumala and Film Star events are still a secret even for our insiders.

Reportedly many of the local expense invoices have been doubled by Mr. N in account books, compared to the actual amount paid to the vendors. Thus, entire Dallas MAA Silver Jubilee ended up as a big mess for every paid party involved, who walked out of with money is apparent from above few minutes of this read.

Mr. S from MAA, Mr. N are laughing all the way to the bank, rest everyone involved made hefty losses. Tollywood stars wasted their valuable time and energy which could have been better used elsewhere. A generous cause was dampened by a simple misstep from MAA. How come industry bigwigs let it go in first place is a million-dollar question!

The whole MAA team made a huge mess out of what was supposed to be a signature event. There is no point in blaming each other and washing dirty linen in public now. All these so-called MAA leaders have mishandled the magnanimity of Marquee stars such as Chiranjeevi. And they have squandered opportunities not just now, for future as well. No big star will come forward to be part of these programs. Each of these members, along with those with who are now feigning ignorance have a role to play in this. #KhabarLive