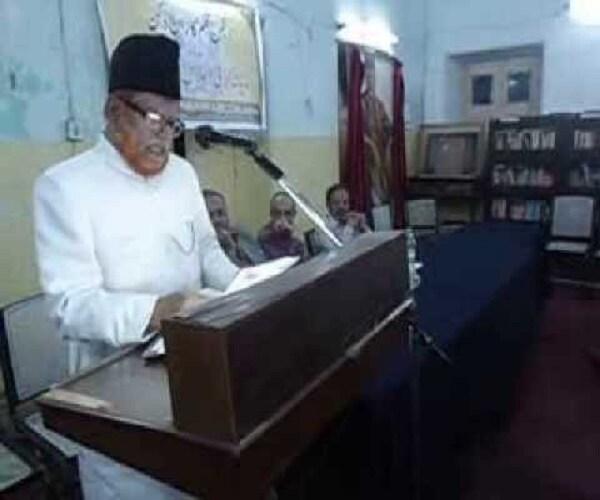 If you are looking for a pigeon-holed answer to define him, forget it. He doesn’t believe in a singular identity. Like all creative people, he has several areas of interest in his life. Yes, he is multifaceted and intriguing. Dr Syed Abbas Muttaqui doesn’t want to play just one note – it becomes a bit monotonous and boring. So, he is a many-sided entertainer – teacher, writer, poet, dramatist, humorist and an Imam all rolled into one.

But, he has carved a niche for himself in the tanz-o-mizah genre. Last week, he had his moment in the sun when he was bestowed the prestigious Makhdoom Award by the Telangana State Urdu Academy for his contribution to humour and satire. In a career spanning four decades, Muttaqui has authored 13 books of humour, five books of poetry in Urdu and four in Persian. An amazing achievement for a teacher of government school where talent seldom finds encouragement.

He comes across as a paradox. Committed yet relaxed, sociable yet a loner, passionate and also platonic. In short, Muttaqui is extremely amusing and a darn good company. He entertains everyone with jokes, couplets and his amazing grasp of Urdu and Persian. Right from childhood, he is drawn to fun and frolic. A great fan of Prithivi Raj Kapoor and Dilip Kumar, he wanted to sing and act in films. He satiated his desire by acting in school plays. “I still have these passions but now they find release through my writings,” he says.

At 66, Muttaqui is still busy with his writings. His latest book ‘Kahan Gaya Mera Bachpan’ makes an interesting read about his childhood passions and acts of naughtiness. His inborn talents and academic brilliance were not lost on his teachers. They supported and encouraged his passion for literature. The Headmistress of New Progressive School, Azhar Jahan, entrusted him with the job of editing the school magazine, Bazme Shaheen, when he was in class VII.

Right from fifth standard, he started composing poetry and showed it to his Urdu teacher, Saaduddin Qureshi. When the latter was transferred to another school, Muttaqui was sad and penned a farewell poem in honour of his teacher. When he failed to clear the tenth examination, Muttaqui wanted to quit education and join the film industry. However, he continued his education and did his Master’s and PhD in Urdu and, after retirement, in Persian language.

Muttaqui recalls how he used the pocket money given by his father to purchase books and magazines from footpaths on Sundays. Even today, a good number of copies of Khilona and Shama magazines can be found in his house, neatly stacked. He also tried his hand at singing, wrestling, horse riding and sermonising. He was attracted by the sermons of Maulana Mohd Hameeduddin Aqil Husami, who used to pack his talk with a lot of humour. Recalling his different interest as he grew into adulthood, he says:

Muttaqui has captured his childhood events in a humorous way in the book Kahan Gaya Mera Bachpan. He plans to write about his colourful adolescent life under the title ‘Abhi Toh Main Jawaan Hun’ and present his old age as ‘Azizo! Ab Allah hi Allah hai’.

The writing canvass of Muttaqui is very wide. He has written on a variety of things that have impacted his life. One thing is for sure – he doesn’t hesitate to call a spade a spade. He faithfully produces the waywardness of even his father who was given to drinking and gambling and takes pot-shots at the foils and foibles of others. He doesn’t believe in ‘Neki kar aur darya main daal’ but in ‘Neki kar aur diary main likh maar’.

However, he is known more for his humorous prose than poetry. One can almost feel the sound of the breaking heart and fall of a tear drop in his soul stirring ghazals in ‘Tanhayian’. Sample this verse which reflects the dejection of a star-crossed lover:

When one reads his satirical prose, one wonders whether it is the same writer who penned these moving verses. His articles have been a huge success at the Zinda Dilane Hyderabad programmes. He often appeared as the opening batsman of literary programmes. He would stay long on the crease and score tanz-o-mizah runs. He made the audience break into splits with his humorous chawwe and chakke.

In one of his earliest articles ‘Kachara’, Muttaqui shows his skills of turning a stinky thing like garbage into a readable stuff. He lists different grades of garbage and says the standard refuse is that which contains peels of fruits. “It is not my good fortune to have peels of apple or almond in my kachara. The waste in my house is mostly of onion peels,” he remarks.

The same kind of quirky humour can be found in his other articles like Tel Khandil, Aao Phir Shaadi Karen, Man Aanam Ke Man Danam. When a PhD thesis was done on his works, Muttaqui wrote ‘Ya Lalajab Hum Par Bhi’, expressing surprise that someone considered his writings fit for research. A unique thing about his writings is that they come across as a speech. There is a conversational tone in his prose and the reader feels as if the author is talking to him directly. See how he jumps to conclusion about people’s prosperity by looking at their culinary habits. He says:

Sometimes, he uses English words in such a way as to create humour. For instance, he describes the break-up of a marriage by saying “goya azwaji zindagi ka ball catch hogaya” since the woman was busy watching cricket match putting cooking on the back burner. Muttaqui describes this situation in his typical way: ‘Goya TV ne BV ko beewi rehne na diya’.

Apart from his beautiful Urdu, what adds to the charm of his articles is the use of appropriate proverbs and metaphors. Sample some of the axioms he uses to liven up his prose: Dil ko janab aap pe ana tha aagaya, Bijli si daud jaati hai thandak bikherti, Aaiyna koi chupke se mujh ko dikha gaya.

Who is his inspiration? Pat comes the reply: Mushtaq Ahmed Yousufi. One can detect the wry sarcasm of this great satirist in the writings of Muttaqui. The influence of Khwaja Hasan Nizami, Patras Bukhari, Kanhaiya Lal Kapoor and Rasheed Ahmed Siddiqui can also be seen in his writings. Closer home, he is inspired by Shaz Tamkanat and Amjad Hyderabadi. Muttaqui is also a great fan of Ibne Safi’s ‘Jasoosi Duniya’ and novels of Premchand and Siraj Anwar.

A man of many parts, Muttaqui remains an enigma. As he himself says:

The Undisputed ‘KCR’ – The ‘Mascot’ Of Telangana’s Pride